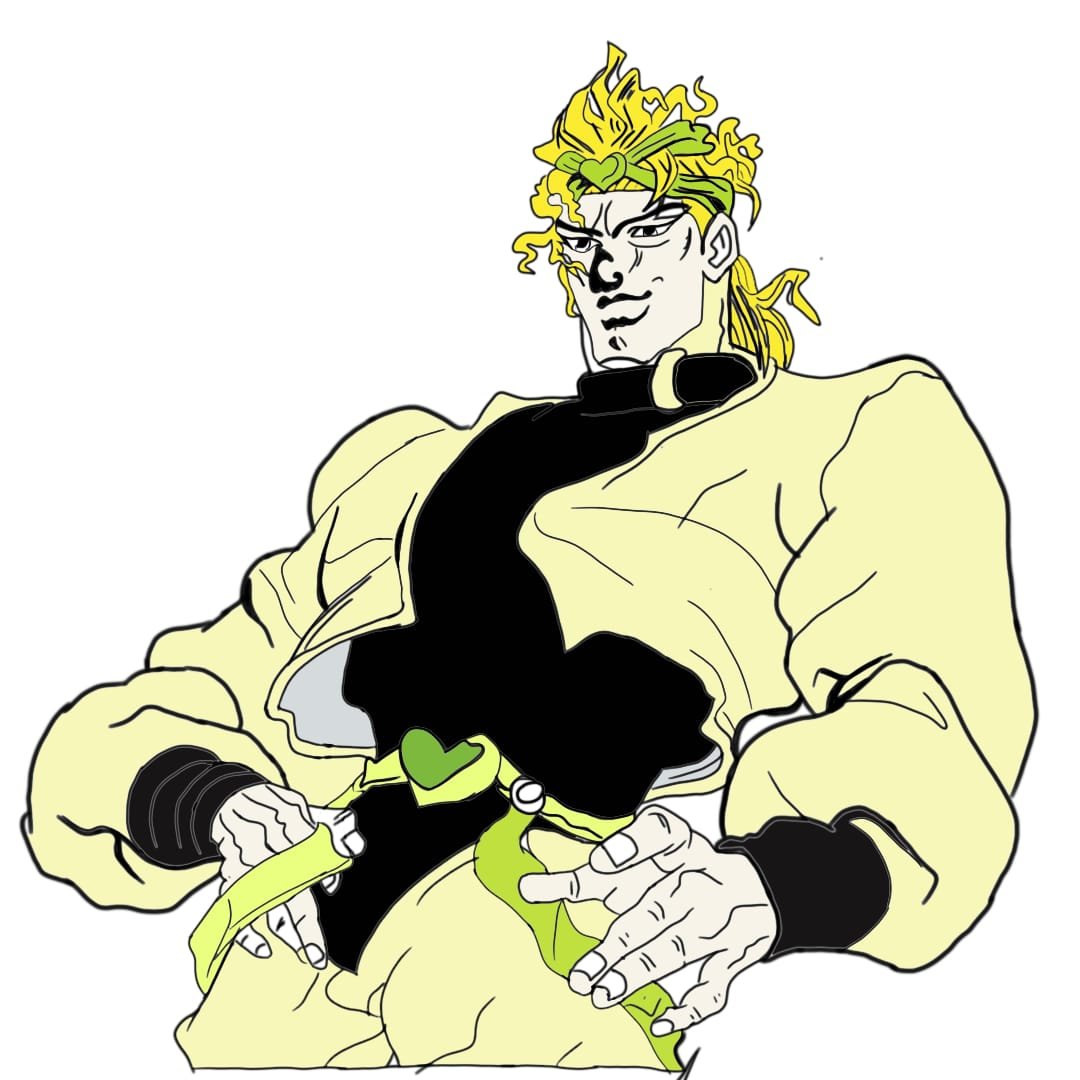 Let’s get started with the Dio Brando Drawing from Jojo’s Bizarre Adventure.

Dio is a character who has been in the anime industry, and he is one of my favorite characters.

He is also one of the most complex characters I have ever drawn.

To draw Dio, you need to understand how his body works, what kind of movements he makes, and how he moves.

Dio is an iconic villain in Jojo’s Bizarre Adventure, and many fans have wanted to learn how to draw him.

At the same time, he may seem daunting at first, but with a few simple steps, you can learn how to draw Dio from Jojo’s Bizarre Adventure.

First, start with a basic sketch of his face.

Once you have the basic shape down, add his signature features like his sharp teeth and pointed chin.

Once you have his face completed, you can move on to his body.

Remember to take your time and ensure each line is clean and precise.

With a bit of practice, you’ll be able to draw Dio perfectly!

The first thing you should do when drawing Dio is to find where his hands will be placed.

He puts them on either side of his hips.

This means that if you want him to look like he is holding something, you will have to move his arms down, below his waist.

Now that we have established where his hands will be placed let us look at his head. His hair is usually long and flowing.

Now that we have looked at his hair, let us look closer at his eyes. They are usually blue or black.

Finally, let us take a close look at his nose. It is usually straight.

After looking at Dio’s head, represented with a circle, we now need to draw his outline.

Start with the top line of his head, which is a slightly convex line across his forehead.

Draw a vertical line below the head slightly on the right side of the head. 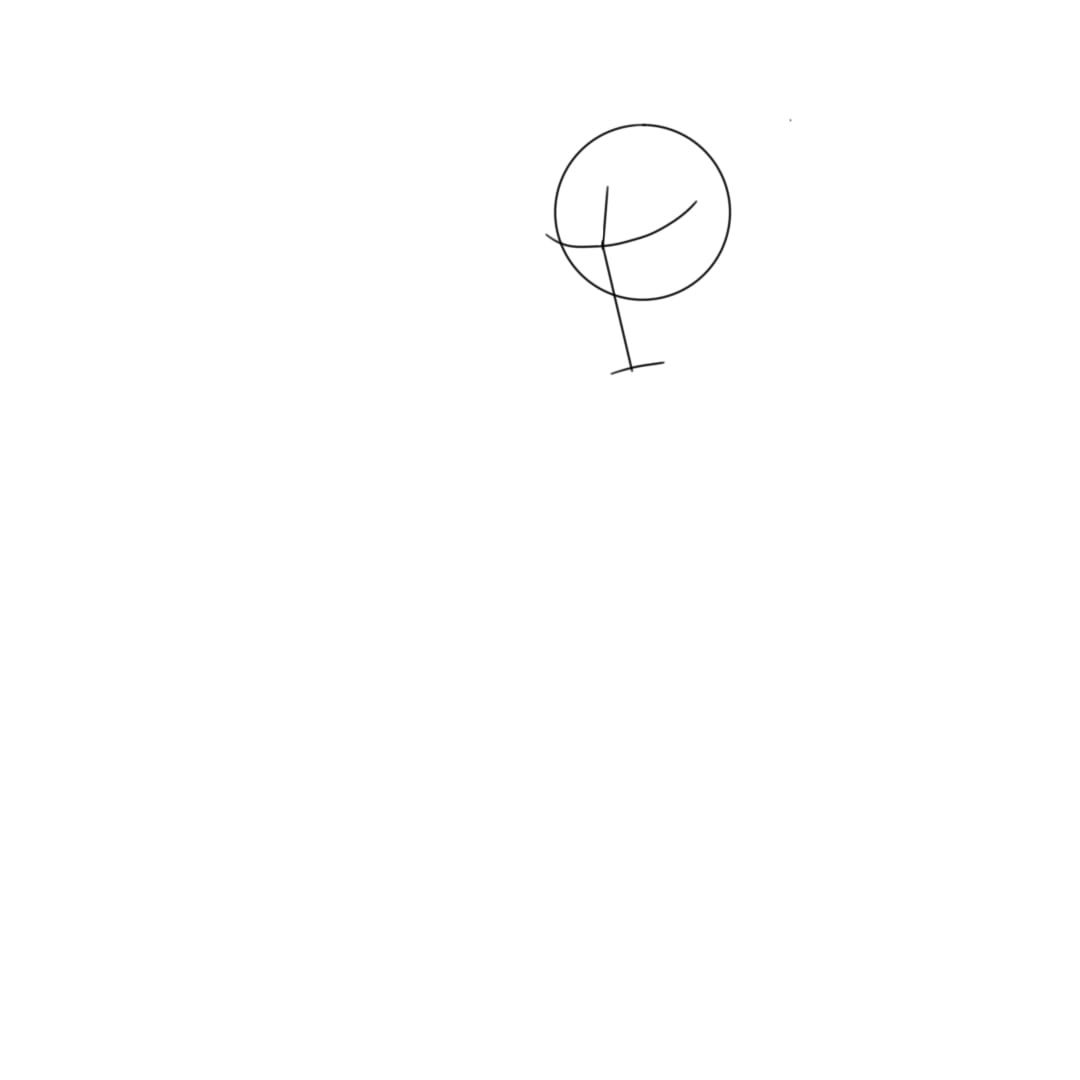 Now that we have outlined his head, we need to draw his shoulders by drawing a rectangle shape to represent his body, and the rectangle is slightly tilted to the right side. 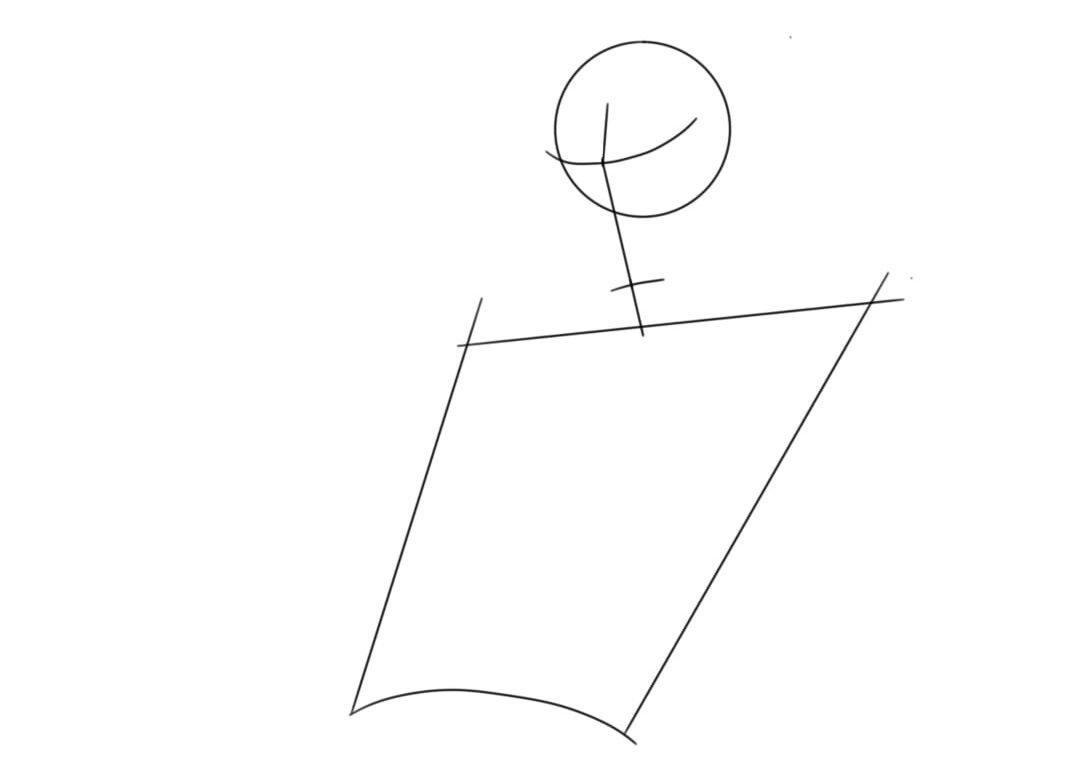 To draw Dio’s waist, start by drawing a horizontal line above his hip bone, running to the middle part of the lower side of the rectangle that outlines the body.

Use a wide oval to represent the hip bone. 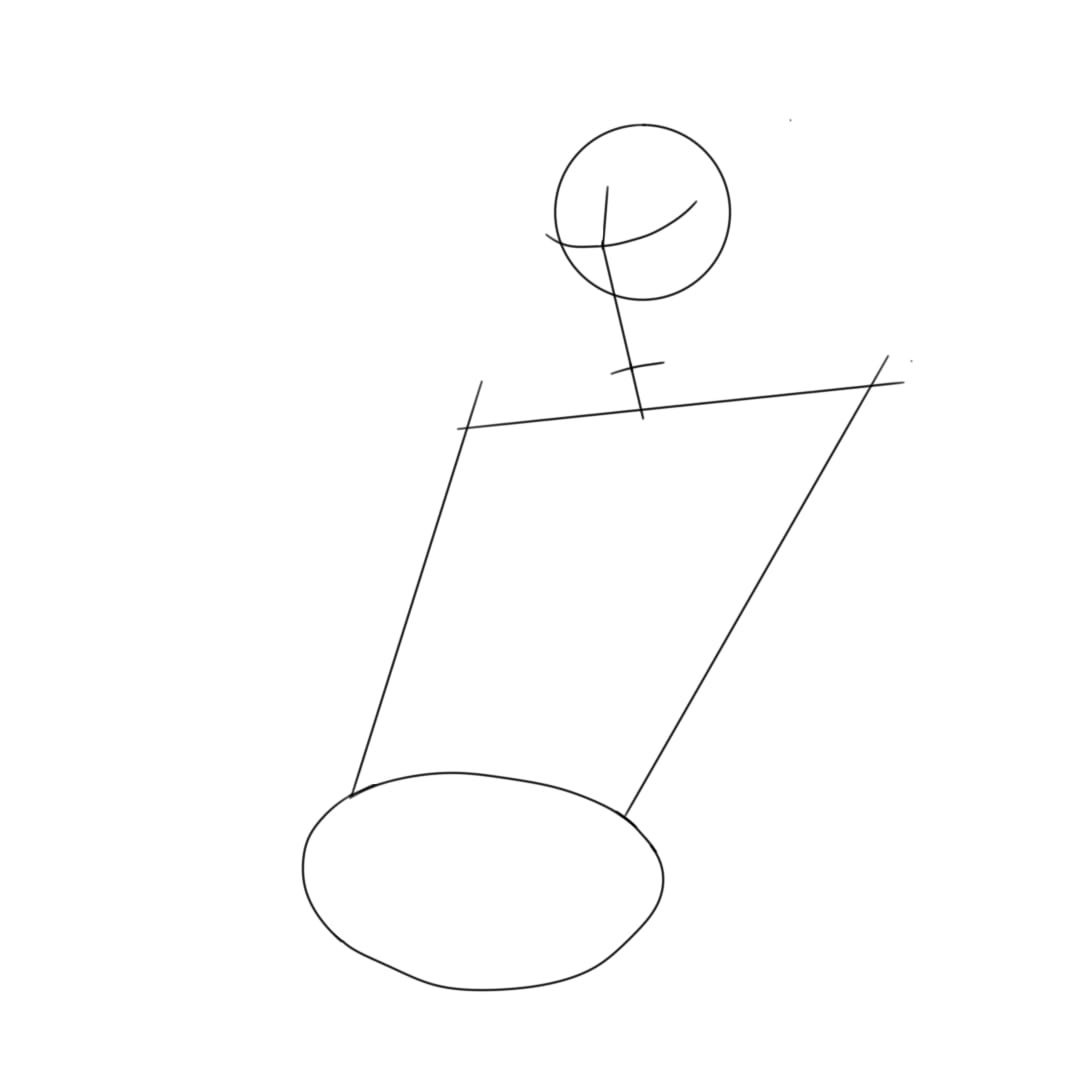 Now that we have outlined his waist, we need to draw his jaw.

First, draw a U-shaped line to draw out his jaw below the circle representing his head.

Draw a slightly concave line inside the circle at the upper part to represent his hairline. 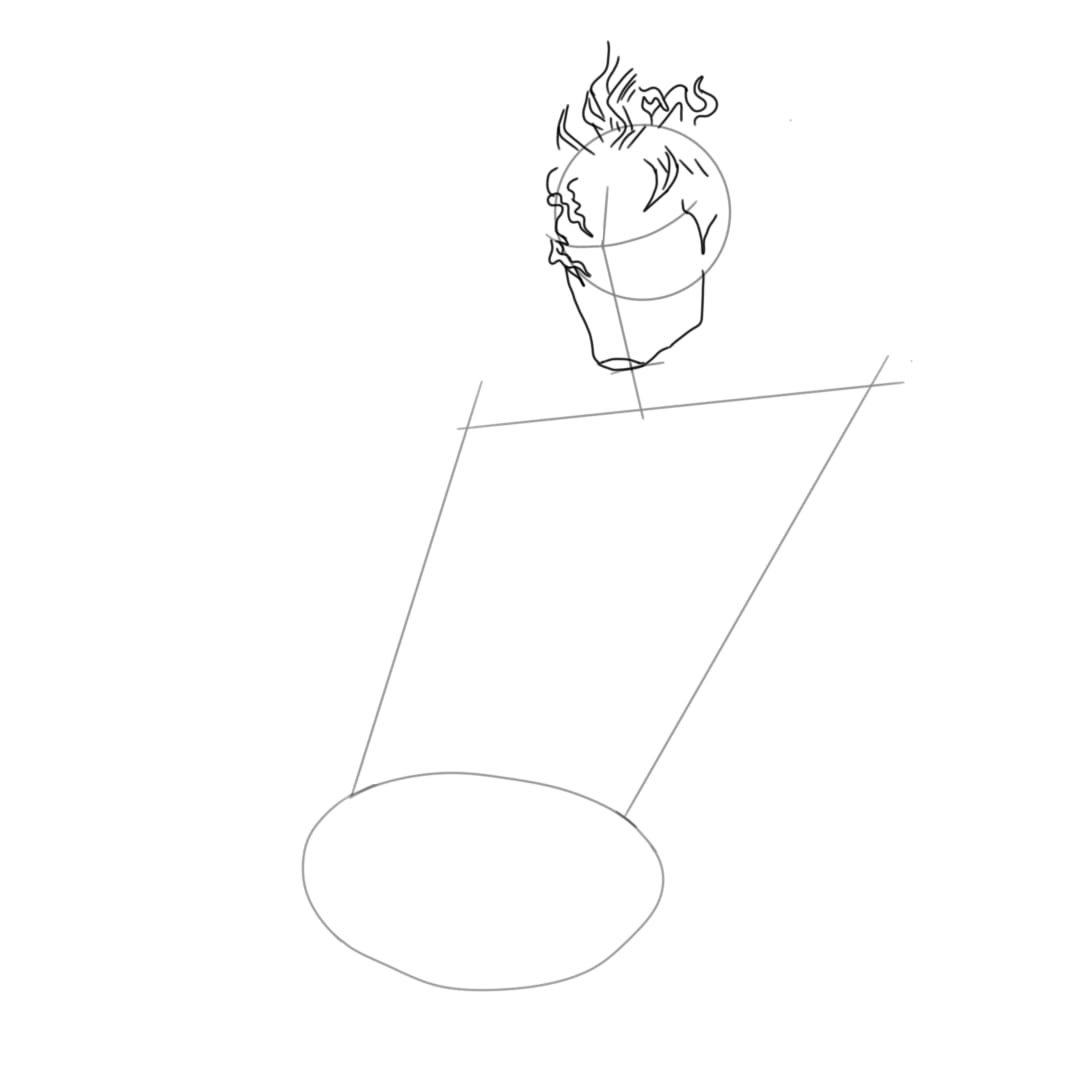 Outline the eyes on the line inside the circle by drawing lines that are not totally straight on both sides of his face at the level of the eyes.

Draw the same type of line at the level of his mouth to form the upper lip, and duplicate the line below to create his lower lip.

Outline the ear on the side of his head; you can only see his left ear because his face is tilted towards the right side. 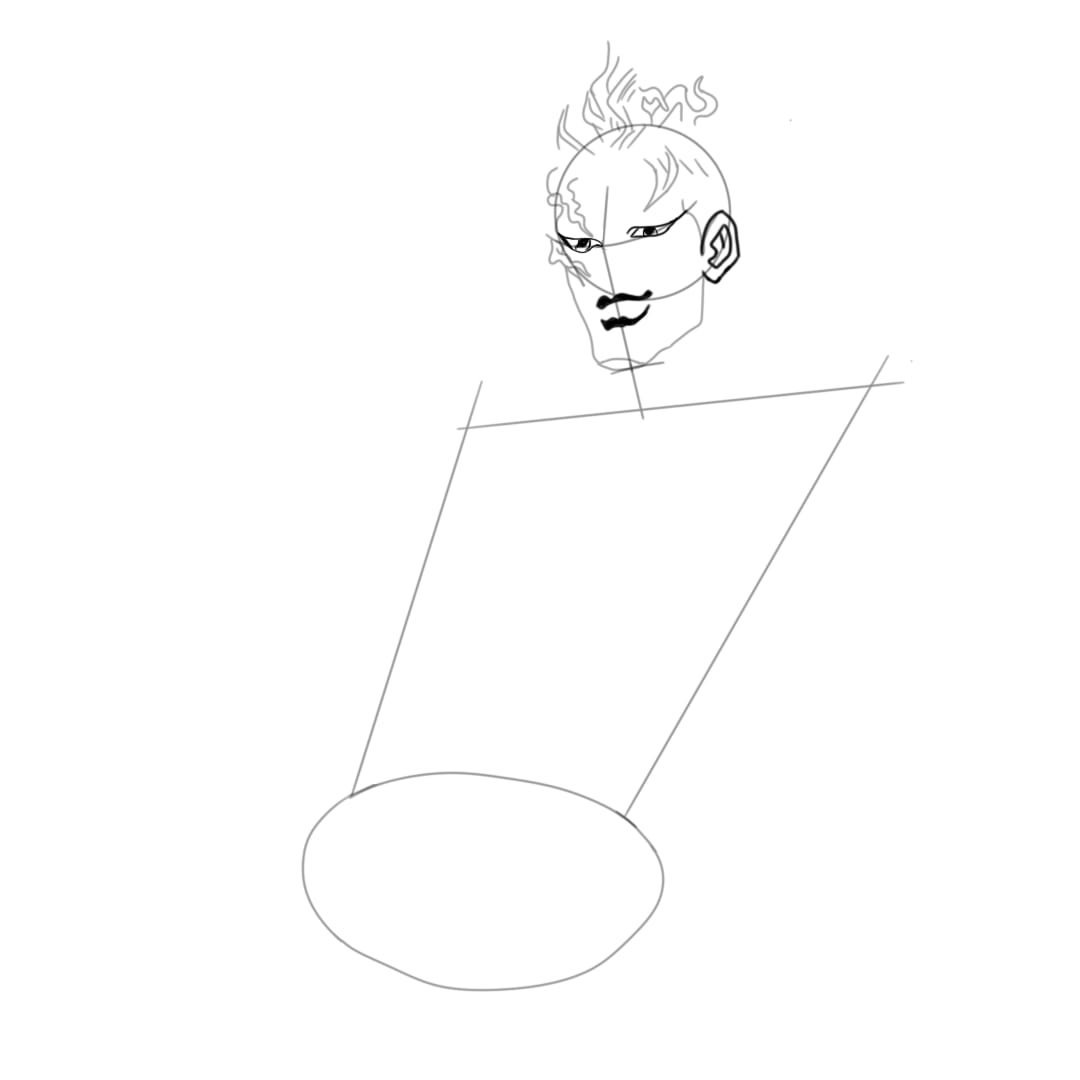 On the concave line representing his hairline, draw a love shape at the center of the line.

Draw a bigger love shape at the lower end of the vertical line that connects his body to the oval of the waist.

This love shape should be a little on the right side of the drawing. 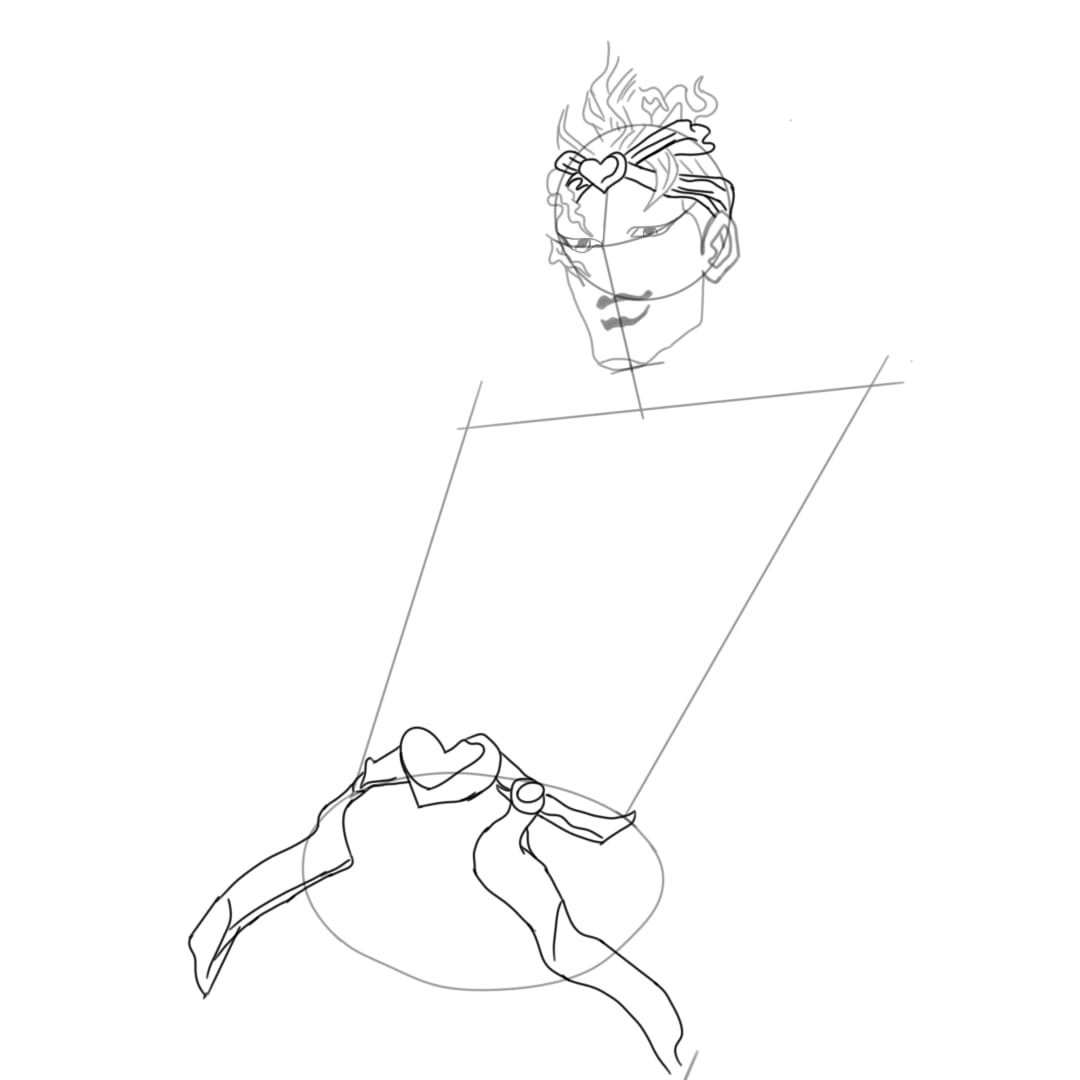 At the level of his elbow, draw a small circle, then draw another vertical line running medially towards the body and another circle representing his wrist. 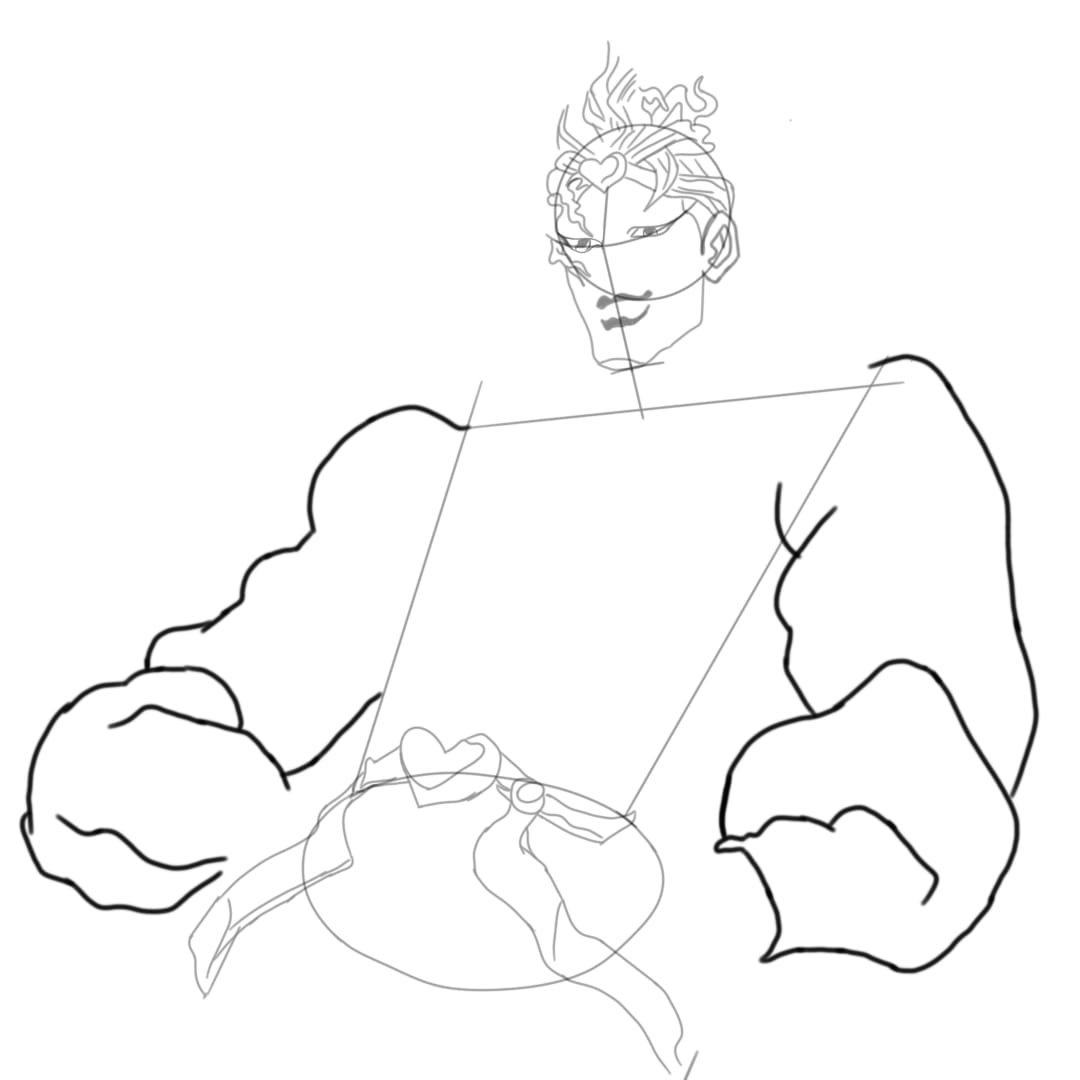 The next step is to draw the neck and the nose.

Draw a slightly curved line to represent the nose. 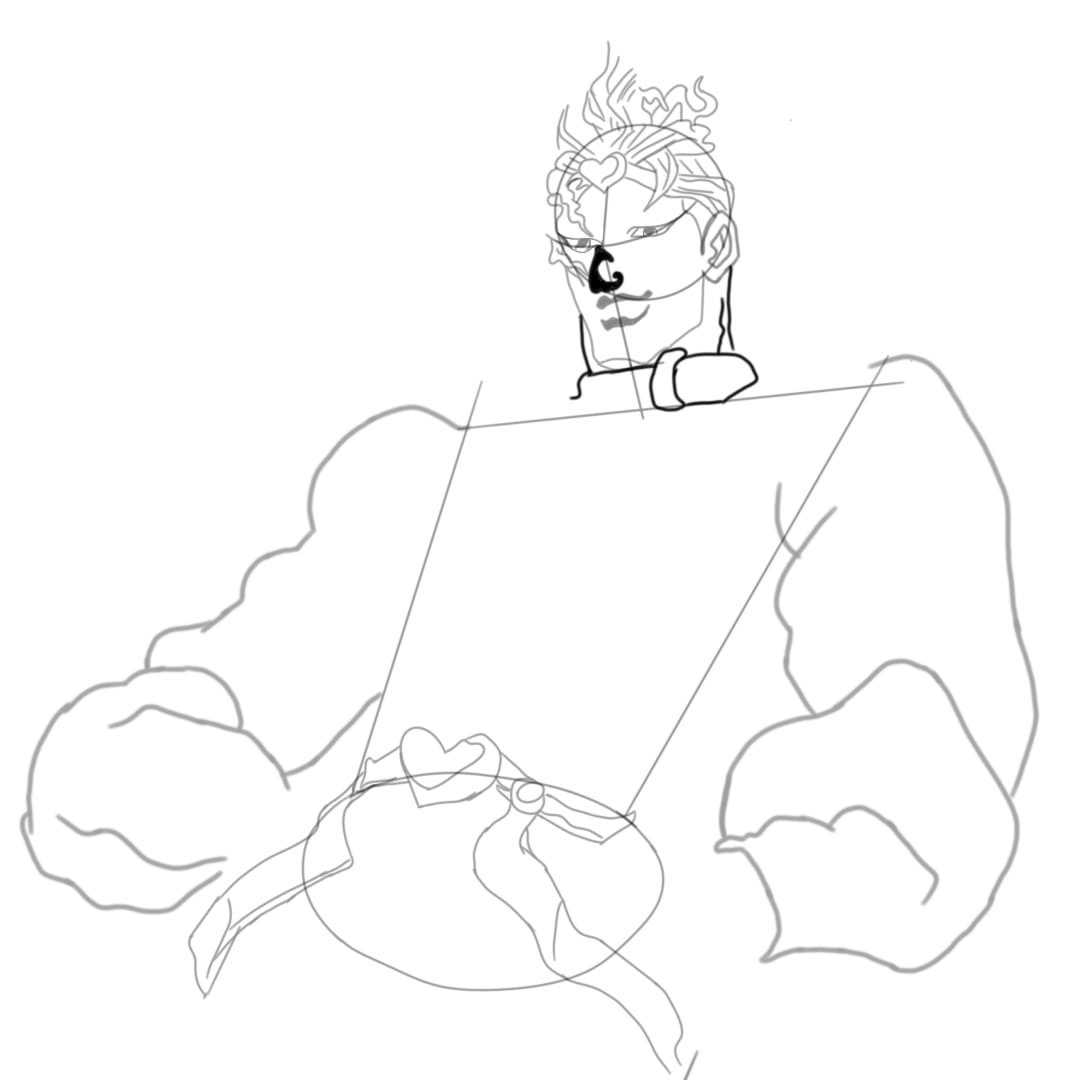 Begin To Draw His Hair

We will begin to draw his hair first.

To do this, draw a triangle-shaped line from the highest part of the circle representing his head to show the highest limit of his hair.

Duplicate the line to add more strands of his hair.

Draw more hair strands on the right-hand side of his head. Draw horizontal lines for the hairband running from both sides of the love you initially drew. 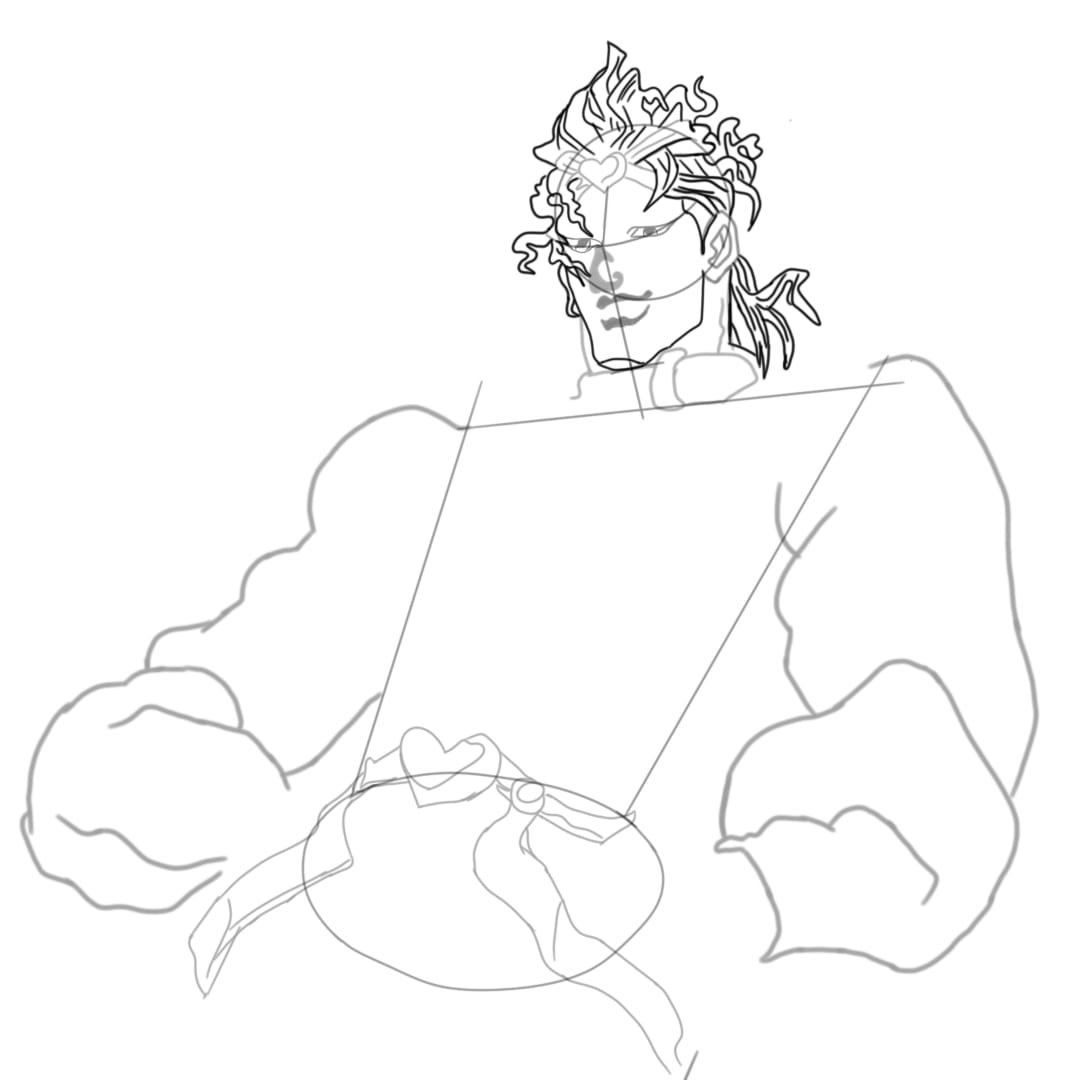 His pupils should appear smaller than they actually are. This gives him a more menacing appearance. 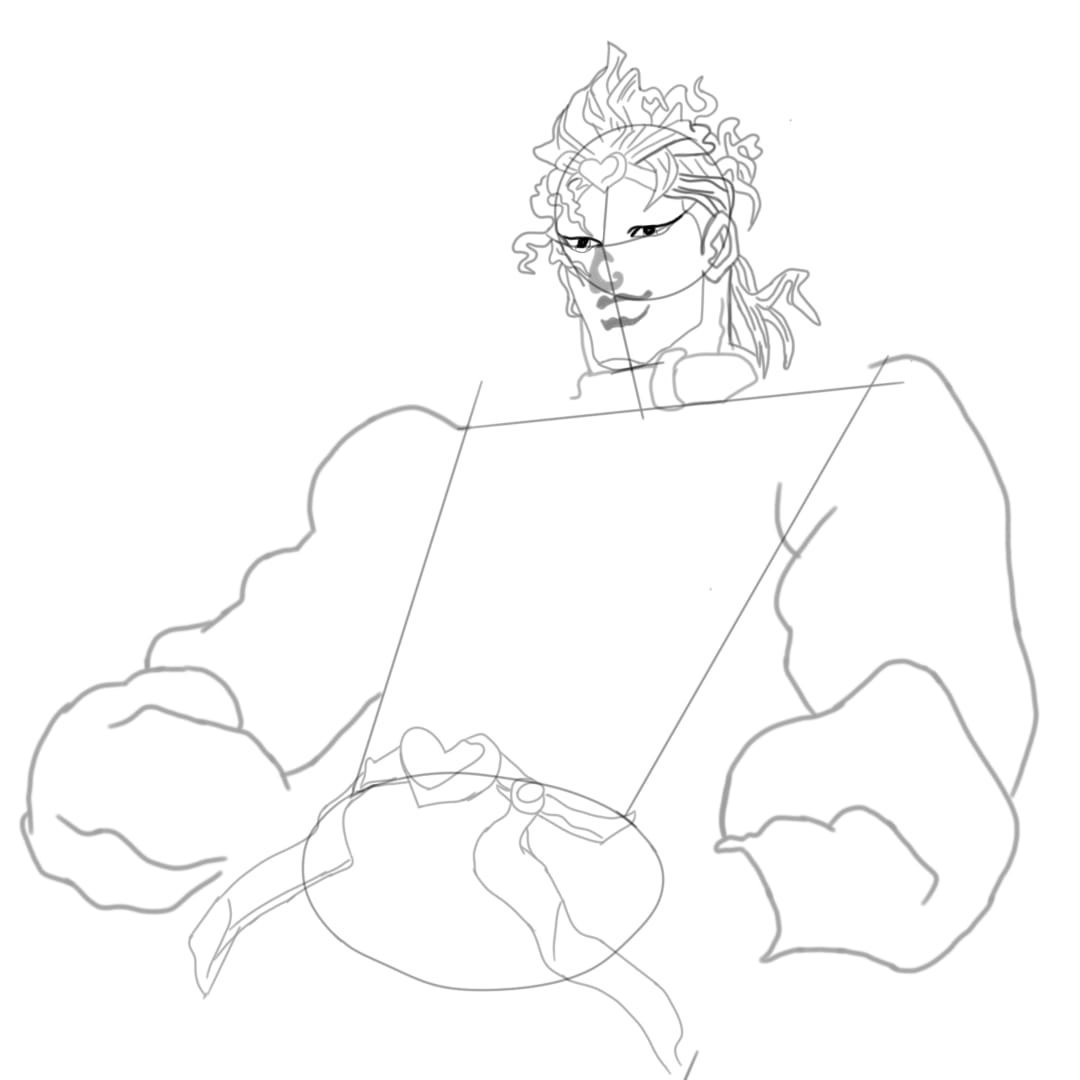 Next, draw the lower eyelids using a short horizontal line under his eyes. Draw the inner corners of the eye.

Draw His Jacket and Shirt

To draw the jacket, draw the lapel using a curved line that starts from the back of the neck and moves up until it reaches the top of the shoulder;

then continue with a curved vertical line running downwards to the chest and then to the back through his side on the left and right sides.

Add a horizontal line between the neck and the shoulder. Draw the rest of the jacket using curved lines.

Start by drawing the collar and button holes to draw the shirt.

Draw the buttons on the front of the shirt.

Draw the collar using a horizontal line that runs under his jaw from one side of the neck to the other.

Draw two short lines than two circles on the collar, the right one bigger than the circle on the left to form the button holes.

Join the two lines together using a short horizontal line.

Draw a line over his left arm to begin to draw the sleeve.

Next, draw the sleeves using curved lines over the upper arm and lower arm of his left and right arm. Draw the inner sleeve of his right hand.

Draw the sleeve cuff with a line running over his wrist. 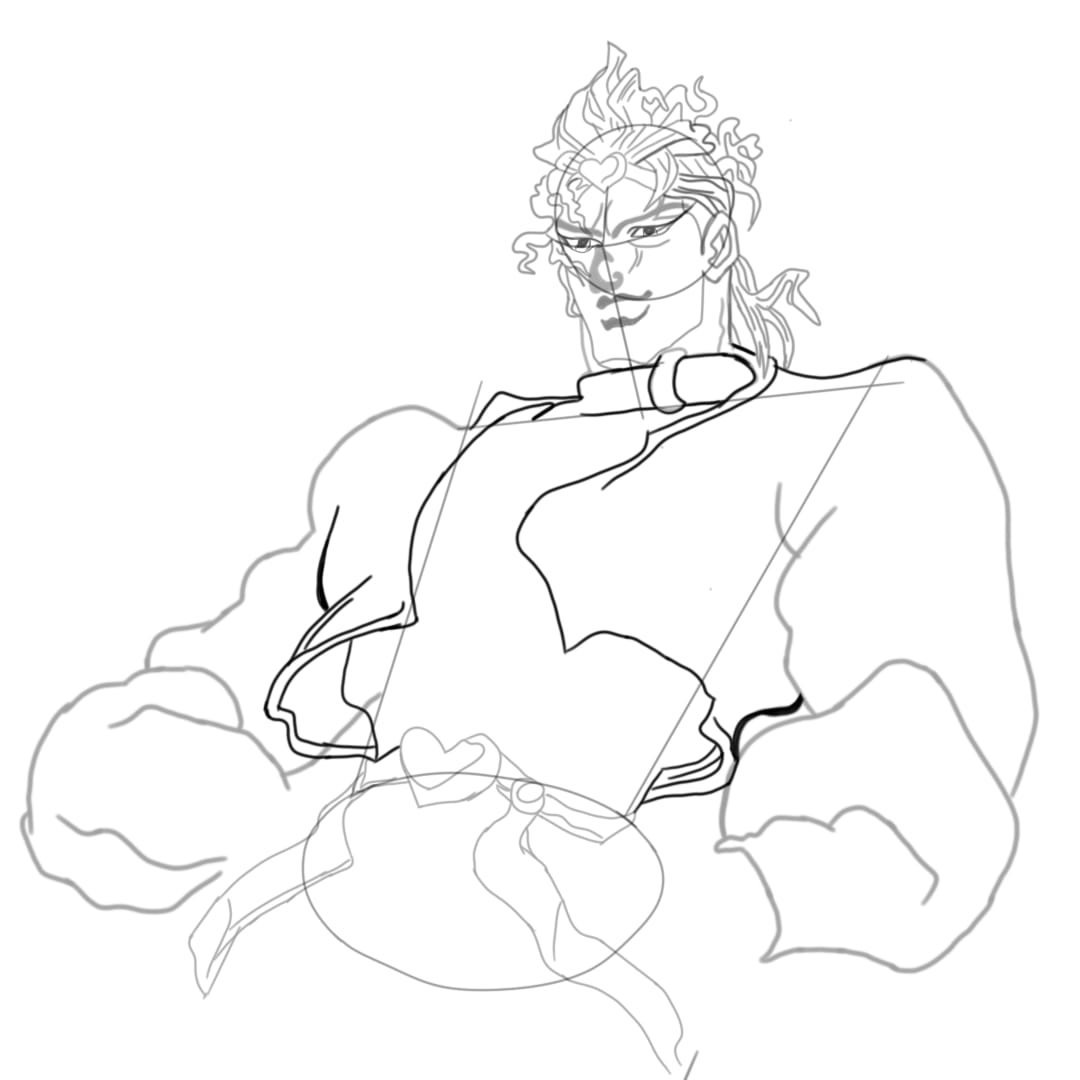 Now we will draw his belt.

Begin by drawing a horizontal line across his waist from both sides of the love shape you drew around Dio’s waist; double the horizontal line to form the flaps of the belt.

Next, draw a circle on the left flap of the belt and draw another flap running downwards than to the side of his body.

Do the same on the right side of his outfit.

Now we will draw his hands.

Begin by drawing the thumb. It comprises the nail, the knuckle, and the pad.

Finally, draw the ring finger using a curved line and the pinky using a straight line.

Add some details like veins in the dorsum of his hands. 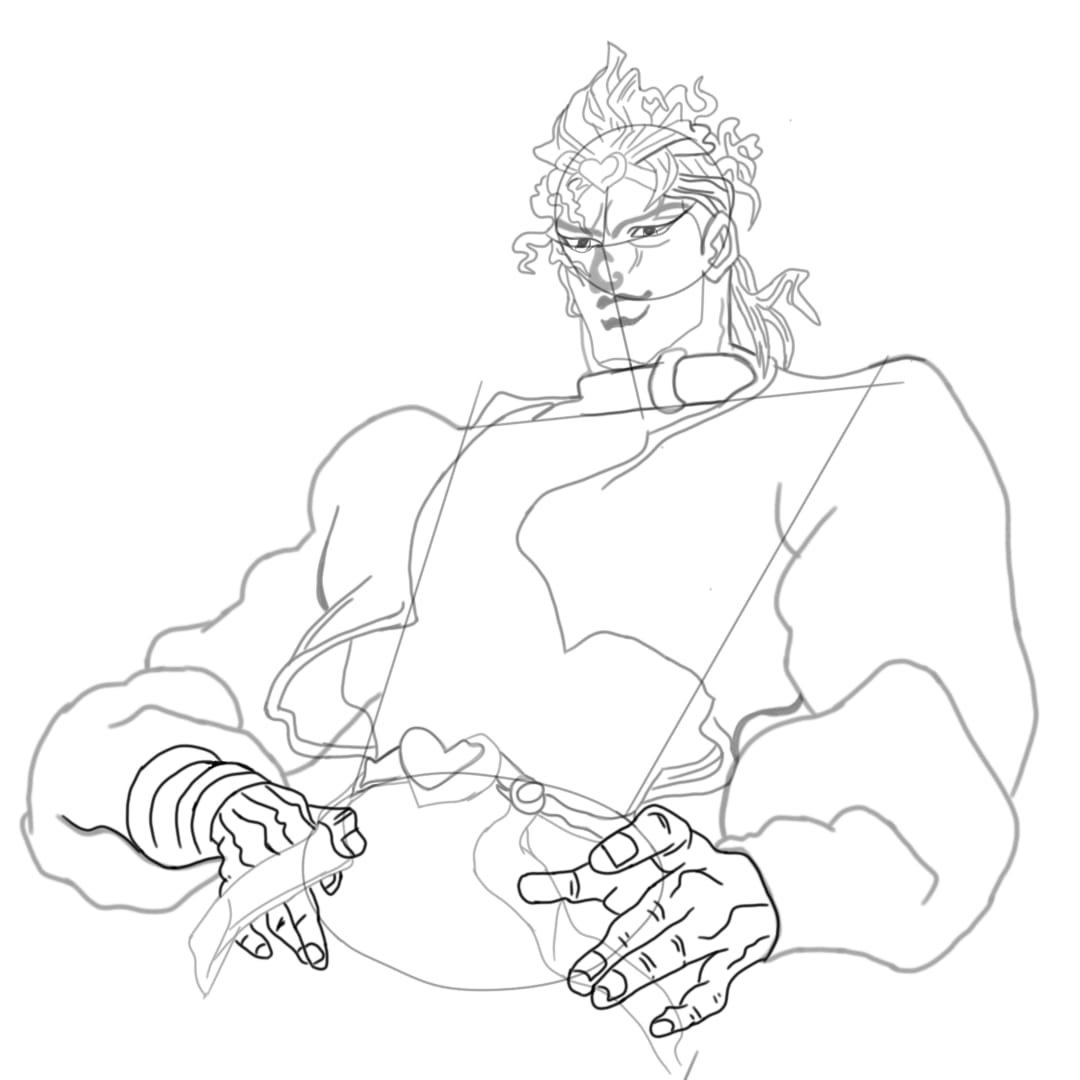 To complete Dio’s hair, draw curved lines forming hair strands over his head and to the back of his head showing the length of his hair.

For the eyebrows, draw a line going down from the center of his forehead to the upper part of his nose.

Then draw a small circle at the end of each eyebrow. The eyebrows create the illusion of depth using curved lines.

Draw the bottom of his nose using a small curve. 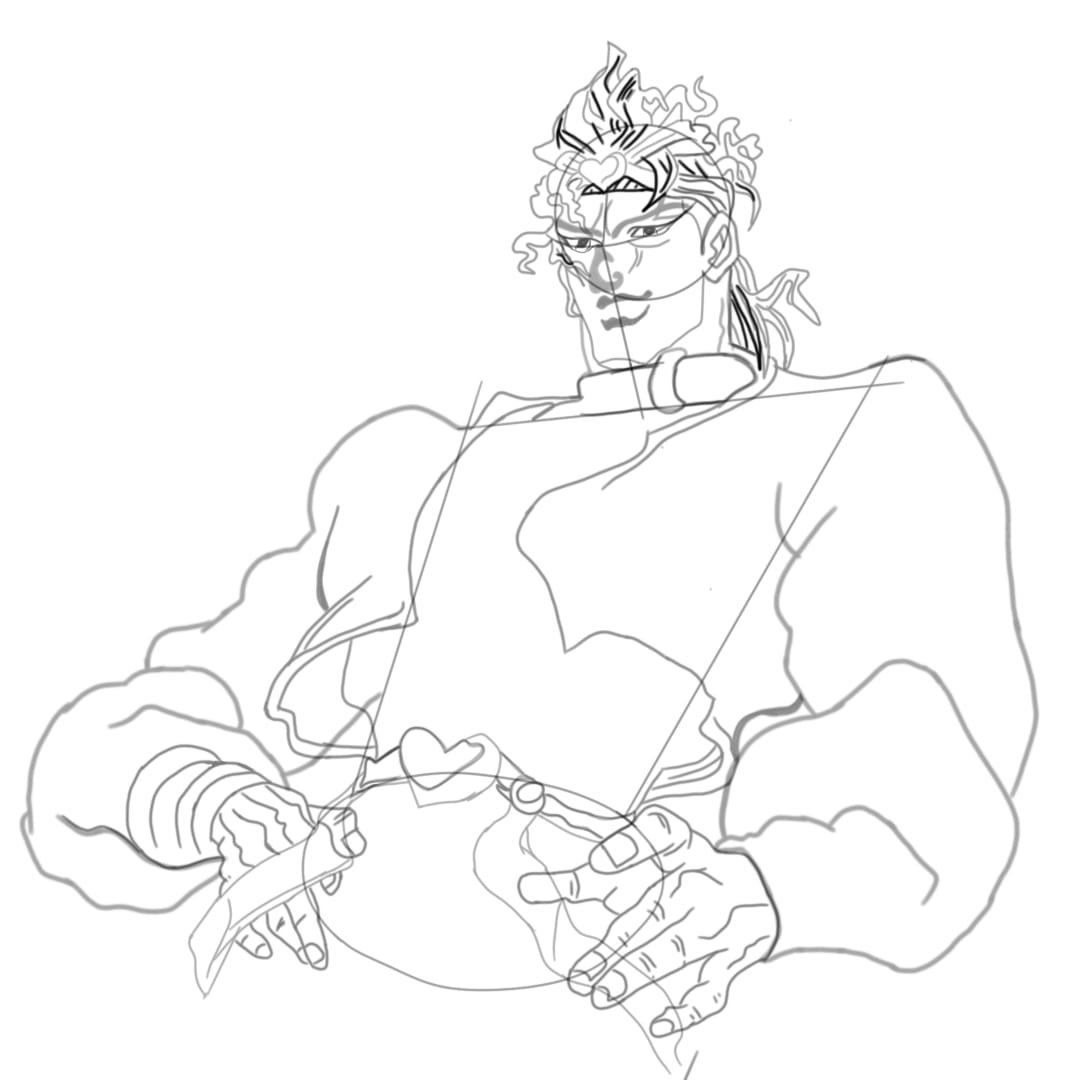 Add Details to His Face and Outfit

To draw his face, use an oval shape to make his cheeks look rounder. Use a long curved line to draw the chin and mouth. The lips are drawn using a curved line.

Add details like wrinkles or creases to the trousers. 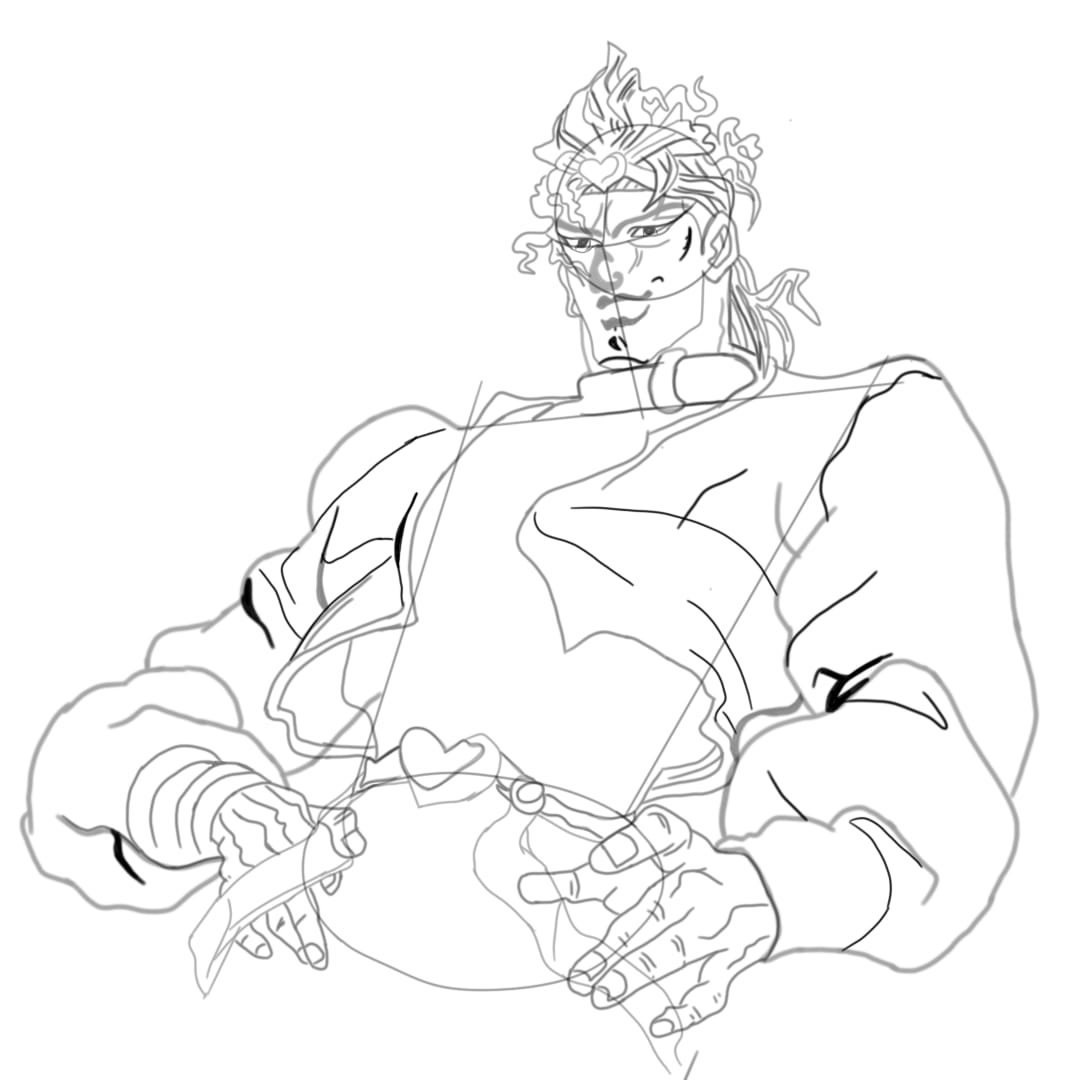 To enhance Dio’s outfit, add some shadows to his clothes. A shadow can be added using a darker color.

To enhance the outline of Dio’s face, add a stroke to the outer edge of his face.

To give dio’s skin a glow, add highlights to the areas where the light hits his skin.

To enhance Dio’s skin tone, use a lighter shade of blue for the background.

Add highlights to the top of his head:

To add highlights to his head, use a brighter shade of yellow-orange.

Enhance the contrast between his eyes and the rest of his face:

To increase the contrast between Dio’s eyes and the rest of his face, use a darker red for the highlight.

To add shading to Dio’s face, use a darker orange for the highlight.

Enhance the definition of his facial features:

To enhance the definition of Dio’s facial features, use a darker brown for the highlight. 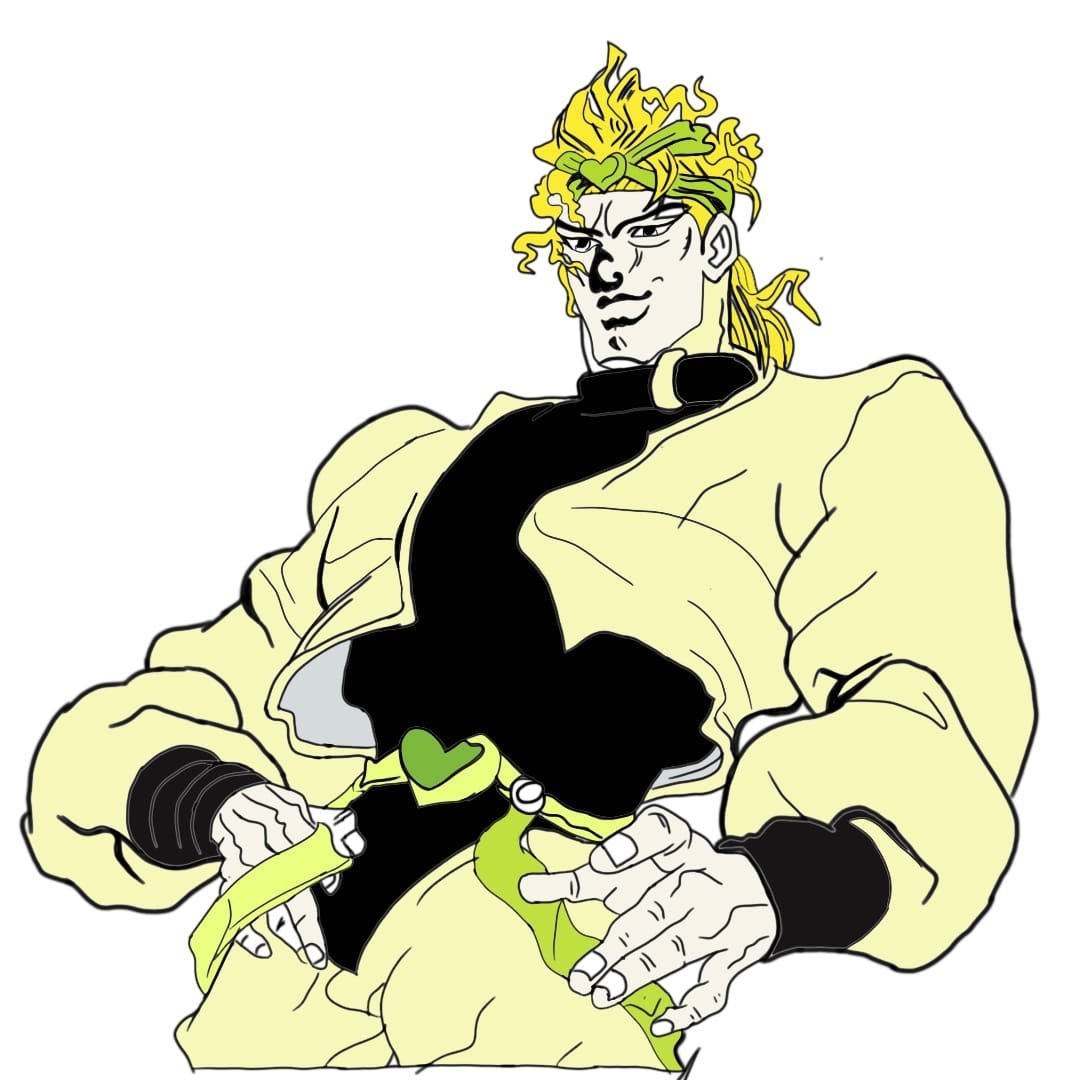 After reading this article, you should better understand how to draw Dio from Jojo’s Bizarre Adventure.

Start by sketching out the basic shapes of the head and body.

Add in the details of the face, clothing, and posture.

Finally, finish up with the background and shading.

With some practice, you’ll be able to draw Dio just like a pro!