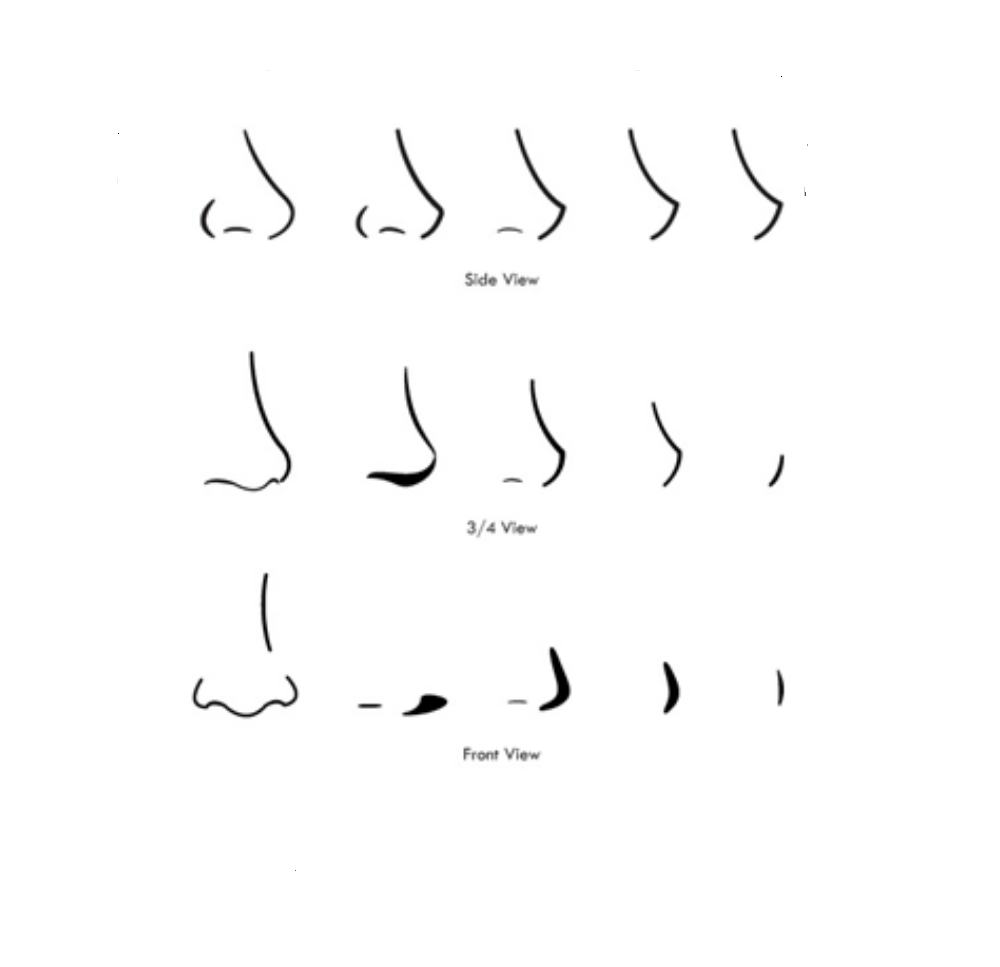 The Complete Guide to Drawing an Anime and Manga Nose

The easiest face characteristics to draw in anime are the noses. The sketch’s level of simplicity or intricacy will be determined by the style you intend to utilize while sketching your character. 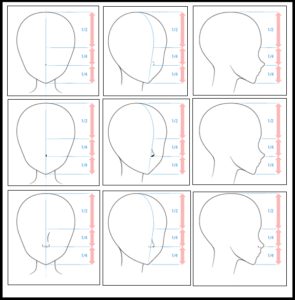 Many variables influence the appearance of the nose, including age, gender, and even character alignment. We’ll attempt to present as many different techniques to create anime noses as possible below.
In anime, the nose is usually portrayed as a single line. Alternatively, two lines indicate the appearance of the nostrils or nose tip.
Anime noses might be a little more difficult to draw. To accomplish so, combine the basic lines from the figure design above with a slightly curved nose bridge. The nasal bridge line can have many different shapes.
Take note of how the nose will seem from the side. It appears as two lines in its most basic form: the nose’s bridge and the nose’s bottom line. A small line of the nostril might be added to it. Take note of how diverse noses might seem in anime.
You’ll need to add some shadows to the anime nose painting to make it more detailed. Shadows are drawn fairly easily in anime. First, draw the edges of the shadow, then paint over this region of the shadow with a thick yet light hatching.
It was fairly simple to learn how to draw an anime nose, as you can see. However, all of the crucial issues are reiterated.
You may draw an anime nose in the simplest form by using only one or two lines;
You may create the nose bridge to add authenticity; to make your anime nose drawing even more complicated, draw the shadows with a light hatching.
Most importantly, practice drawing an anime nose apart from the rest of the body and part of a picture. 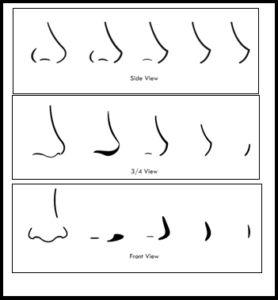 How To Draw Anime And Manga Noses

The noses in anime and manga are frequently tiny and pointed, with features such as the nostrils often not portrayed. Of course, there are many variations to the style, some of which are seen above. For this tutorial, we’ll divide noses into three categories:

This is the most basic and easiest-to-draw style of anime nose. 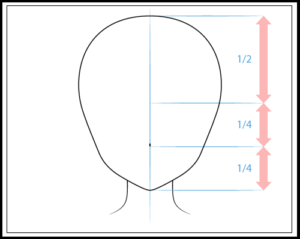 You may draw a dot or a dash for the Front View of the most basic nose. You can even skip drawing the nose when portraying the head from the front, depending on how simple you want the design to be.

When it comes to drawing anime and manga noses from the front view side, all you have to do is draw a dot or a dash, but where do we draw that dot? so the easiest way to judge accurate nose placement is to do half head division horizontally (you’ll have to draw the nose in between the centimeters).

To determine where to place the nose, divide the head in half vertically and horizontally. First, draw this style of the nose in the center of the head for vertical orientation. Next, draw it between the horizontal midway point and the chin for the horizontal position.

I’ve given you the basic positioning idea; now, it’s up to you to decide how you want to form the character. For example, you can use the above basic concept to draw any character’s nose from the front viewpoint, but you must know how to draw from the back.

Depending on your style and the sort of character you want to design, you can raise or drop the nose somewhat, but try to keep it near to the region mentioned above. 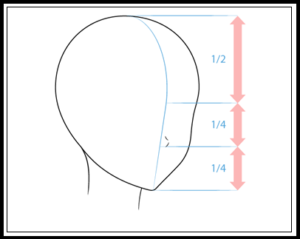 The vertical location of the nose in the 3/4 perspective might be the same as in the Front View. However, the nose will be vertically placed in the center of the face. By extending a line down from the curvature of the forehead to the bottom of the chin, you may get a general idea of where this will be.

Because you’re just sketching the end of the nose, move it away from this line so that the vacant area allows you to fit the whole thing in (if it were drawn out).

With simply two curved lines, as illustrated in the image above, you may suggest the nose. Alternatively, you may draw simply the top curve or even a dot/dash as in the Front View. 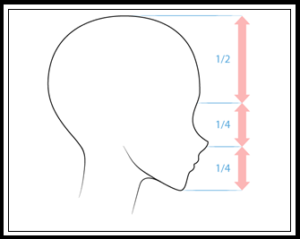 Keep the vertical location of the nose as indicated before and as illustrated in the above figure for the side view. When sketching the same subject from multiple perspectives, novices frequently make the error of misplacing face features.

Because the horizontal alignment of the nose in the side view can be influenced by the face type, nose length, and style, it isn’t easy to have clear placement advice. In most cases, though, you’ll want to draw it pointing out past the brow.

Make the nose’s real shape similar to a vertical checkmark, with a small bottom curve, a pointed tip, and a lengthy top curve.

Using Light and Shadow to Draw an Anime or Manga Nose

Another popular method for drawing an anime nose is to use some simple shading. Depending on whether you’re using color or not, you may make this entirely black or a grey/darker skin tone. 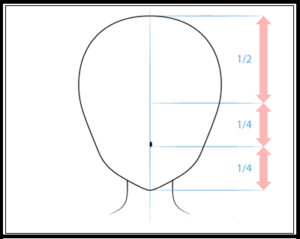 In the front View, divide the skull in half vertically and horizontally. Place the nose shadow to one side of the beamline, with its horizontal plane between the chin and the face’s horizontal midpoint.

Shape the shadow in an oval shape, with the side facing the horizontal line somewhat flatter. 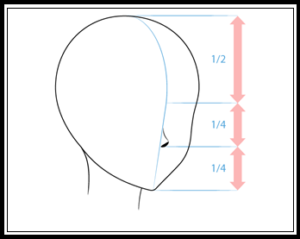 You may arrange the nose in the 3/4 view the same way you did in the first example. It should be placed horizontally between the midpoint of the head and the bottom of the chin and vertically along a line drawn from the forehead to the chin. Use a broader shadow at the base and a narrower at the tip to shade the bottom section of the nose. Draw a basic curve for the top section of the nose and a pointed tip for the tip.

In contrast to the simple nose example, you may make the upper curve somewhat wider and more distinct, so it doesn’t get lost in the huge shadowed region. Please keep in mind that this nose shading is for general/standard lighting. 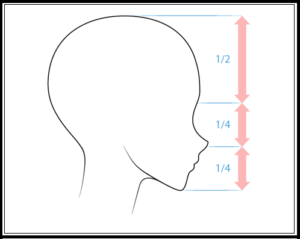 You can create the “shaded nose” side view without any shading (just like the side view of the first example). Because the shadow is employed to assist define the nose, it is unnecessary when the nose silhouette is clearly defined.

If you want to make relatively serious appearing artwork while still keeping the anime or manga aesthetic, the “shaded style” of anime/manga noses may be more suited. When showing closeups of characters’ faces, it’s also sometimes employed.

Draw it closer to traditional art for a more genuine anime nose, with more curved lines and a higher level of intricacy. In addition, you may reveal the nostrils/nostrils at all angles. 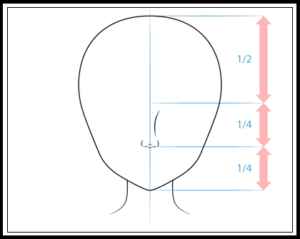 Divide the head in half horizontal and vertical for the Front View of the realistic nose, as in the previous two instances. Between both the horizontal halfway point of the head and the base of the chin, the bottom of the nose should be in the middle. To center the nose on the head, use the vertical midway point.

Draw the bottom of the nose on both sides similarly, but only one side indicates the nasal bridge. This should be the “shadow side” if you were to shade the drawing. Because showing both sides of the bridge will make your drawing appear weird, you only want to depict one side of the bridge (you can try it yourself). 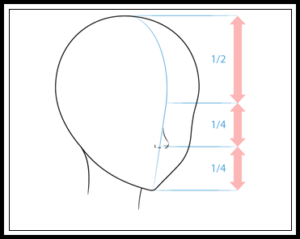 As in the previous two instances, project a line down from the top of the head to the bottom of the chin to place the nose in 3/4 perspective.

Draw curves on the bottom and bridge of the nose the same way as the first example, but make them a little longer to define more of the nose’s form. Again, include a suggestion of the nostril and, if desired, and under the curve on the tip of the nose. 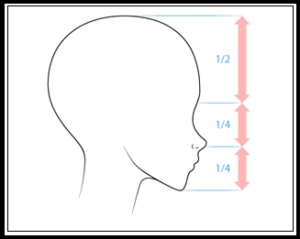 Place the semi-realistic side view nose between the horizontal midway point of the head and the bottom of the chin, as in the previous two instances. On a horizontal plane, the nose should extend slightly beyond the brow. Draw a curve in the tip of the nose (rather than a point) and a suggestion of the nostril.

As previously stated, the placement of anime noses varies based on the style and character. 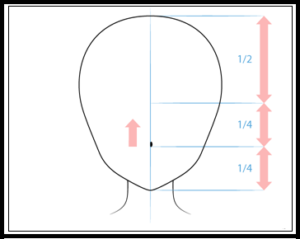 The nose is drawn further up in the above illustration of a little more realistic face. 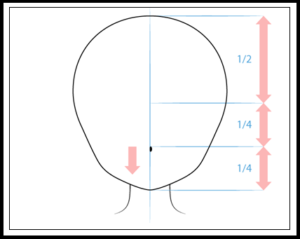 In more stylized figures, such as this one, the nose is frequently drawn further down. 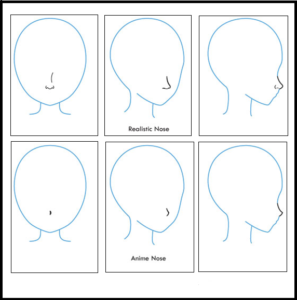 On a more stylized head above, the nose is lower down on the face.

It will be a useful experience if you decide to create your anime characters in the future.

We’ll start by drawing the head. To define the head and mouth, draw an inverted egg shape.

Make the guiding lines. Begin by drawing a vertical line through the center of the head. This line contributes to the symmetry of the face.

You should know where you want to put the nose before you start designing it. The parameters we created previously will assist you in deciding where you’ll sketch them.

Make a nose drawing. We’ll sketch the nose in two distinct perspectives, as we discussed previously.

In comparison to the other viewpoints, drawing the nose from the front View is significantly easier. To represent the nostrils, a dash, a dot, or even two small lines will suffice. Pick one of the three, set it in the proper location, and you’re done.

The nose can be placed in the same location as the front View, but no dot or dash will be used. To represent the nose in this perspective, you’ll use two lines. First, draw a slightly curved line for the nasal bridge, then finish it with a second line with an inward curve to make the tip of the nose.

How to Draw an Anime Boy’s Nose

To create an anime boy’s nose, use the same procedures you did for the anime girl’s nose. It’s worth noting, though, that the noses of male and female anime characters differ slightly.

You must ensure that the male character has a broader nose. If you’re going to tint the nose, make it more prominent than the shading on the female nose.

You may subsequently personalize the noses of your anime characters by playing with different nose sizes, shapes, and even nostrils to give each of them a unique look once you’ve learned how to draw the basic form of the nose.

In general, drawing anime noses in any perspective isn’t difficult. In addition, the more stylized the nose is, the easier it is to draw.

You may try adding or removing details and sketching them with varying degrees of realism (as demonstrated at the beginning of the course) to see if you can find a style that you enjoy.