It is not very tough or hard to draw crying anime eyes. It becomes very easy if we keep the certain particular thing in our mind and by using these things we can draw our images very easily using step by step such as first of all always use pencils to draw a character or image because by using a pencil we can easily correct our mistake by using an eraser and we could improve our sketch. 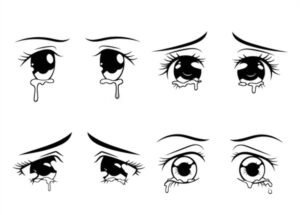 The first image is the sketch of an anime eye in your mind and then keep remembering things in your mind then start your drawing. 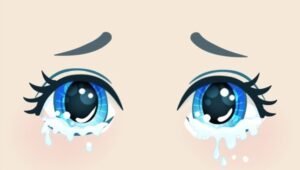 First of all, draw the outer lines of the eyes after the outline of the outer side-eyes made the lines of eyelid and iris step by step.

This image should be drawn in such a way that when you move or turn your face to the other side eyes should be looked at as one larger and another smaller this happens when an eye that is closer to you should be greater or larger than that eye which is far from you.

Always use a simple pencil for outlines while for coloring use black color.

For shading, the iris of the eye uses purple color. It will make a dark color shade of iris. To give better shade and color made the upper portion of the iris a little dark. By doing this way shad your image of anime eye will look more clear and better.

After shading and coloring, the iris starts work on the pupil of the eyes. First of all, draw a gradient on the already draw iris. Color it in this way that its shades looked dark and bright from the top and look a little dime on the bottom of the pupil. While coloring or shading gradient use a pencil with much hard pressure because it needs to show shading dark to light in it. It means dark shading needs great pressure on the pencil.

Shading near to the iris outer corner needs much more pressure. While making shades across the iris do low pressure on the black color because we do black shads for under the eyelids. After that, we use gray color for coloring and shading the middle part of the eye to mean eyeball. While the upper portion of the eyeball remains white after gray eyeball. By making shads in this way the style of our draw anime eye look rounder.

At the bottom of the iris we use pink color to shade it using pink eye looked much bright and a lively and white gel pen is used for highlighting the eye.

The eyes are a very important and essential part of the face. Through our eyes, we can express our expressions. In drawing crying anime eyes we should keep certain things in our mind first such as which type of crying expression we want to show its image should be clear in our mind so that we can easily draw on paper on it. We should use a pencil instead of a pen so that we made our improvements by easily erasing it. 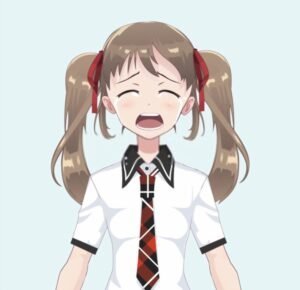 Crying eyes with up tears animes

For drawing crying anime eyes it is essential for us to draw a proper shape of crying eyes first of all. Crying eyes are those which had tears in them and tears are coming down word the eyes. While drawing crying or manga eyes it is important to draw full headfirst. Because full-face represent our drawn anime eyes in the very best, nice, and proper way. 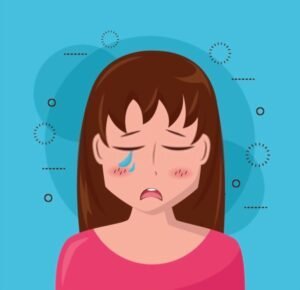 Placing crying eyes on a face in the best style is considered a very interesting art of representing your expression. In crying anime eyes tears flow down to face. For drawing this we should keep eyes right below the line of the head.

When we need to draw crying eyes it is necessary to draw eyes in a unique and proper way first. After drawing eyes, we start work on their eyelids and eyelashes from the bottom of the eye towards its outer corner. We draw it in a curved shape on the outer part of the eye but at the same time, we will draw its upper eyelid or eyelashes less or slightly little curved style than the normal size of the eye. It must be drawn lower side of the outer eye.

After drawing this proper shape of the eye draw a few drops of small tears in the inner side of the eye coming towards the down word of the face.

To draw manga anime eyes with tears we follow all rules that we have used to draw crying anime eyes. We should keep all the above things in mind and first of all draw a proper shape of the eye but the difference that we have to draw or show is that we cover the whole bottom portion of both eyes with tears. From the bottom edge of the eyelids, we have to draw outlines that will show the shape of tears that they are ready to spill off from the eye. 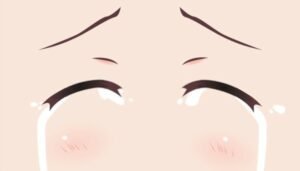 In these anime eyes, eyes are drawn in such a way that they seem to be fully closed and a curve can be seen upside. In this style, eyebrows are drawn toward the downside and eyes seem closer to each other. After that tears should be drawn that look like coming from closed eyes but tears are going so much down that it reached to the chine of the face mean in simple words tears start from the top of the face to the bottom of the face.

First of all, we draw the shape of the head by drawing a horizontal line from its middle. From the right bottom and under of this line we draw eyes. These eyes must be drawn away far from each other. the distance or space between two eyes must be held in such a way that we can draw a third eye between them if we want.

We can draw a character of a crying girl by using the following steps and principles. For this, we also use pencils instead of any pen because the pencil is easy to erase and we can easily make improvements in our drawing. 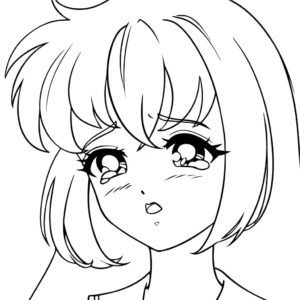 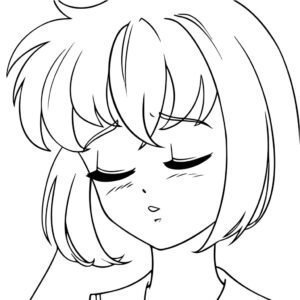 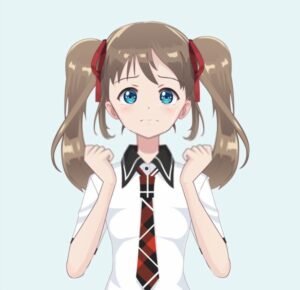 1. After making a unique image of a sad face we will draw a line in the inner part of the eye. After drawing this slight curve line in the eye we draw some small tears in the shape of “u”.

When the image wants to show the beginning of crying such types of tears should be drawn.

Still, if you have any doubts then this video is just only for you

Drawing of Sad and Crying Anime Face of the Boy

For drawing a sad and crying anime face of a boy follow all above mention rules. For this purpose, first of all, we need a sharp pencil and for making improvements in our drawing we should also need an eraser.

We follow all the rules and steps that we had set in the making of the sad and crying anime face of a girl. 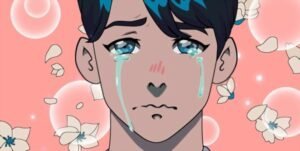 As we hear a lot that eyes are the mirror of our heart. We can say things that we can not say with our tongue.

First of all by using a pencil draw all-important lines of your eyes sketch on a proper face with head and hair.

Making and drawing anime characters with crying eyes, tears and sad faces is not very difficult.it is a very interesting and unique type of art by which one can express its expressions to the world by making its anime character. It is also the work and fun of colors. Eyes are the best way to represent your emotions and expressions. If we use all these principles we can draw our imaginary and anime characters in the very best and nice way.

Follow the given link below if you are willing to see