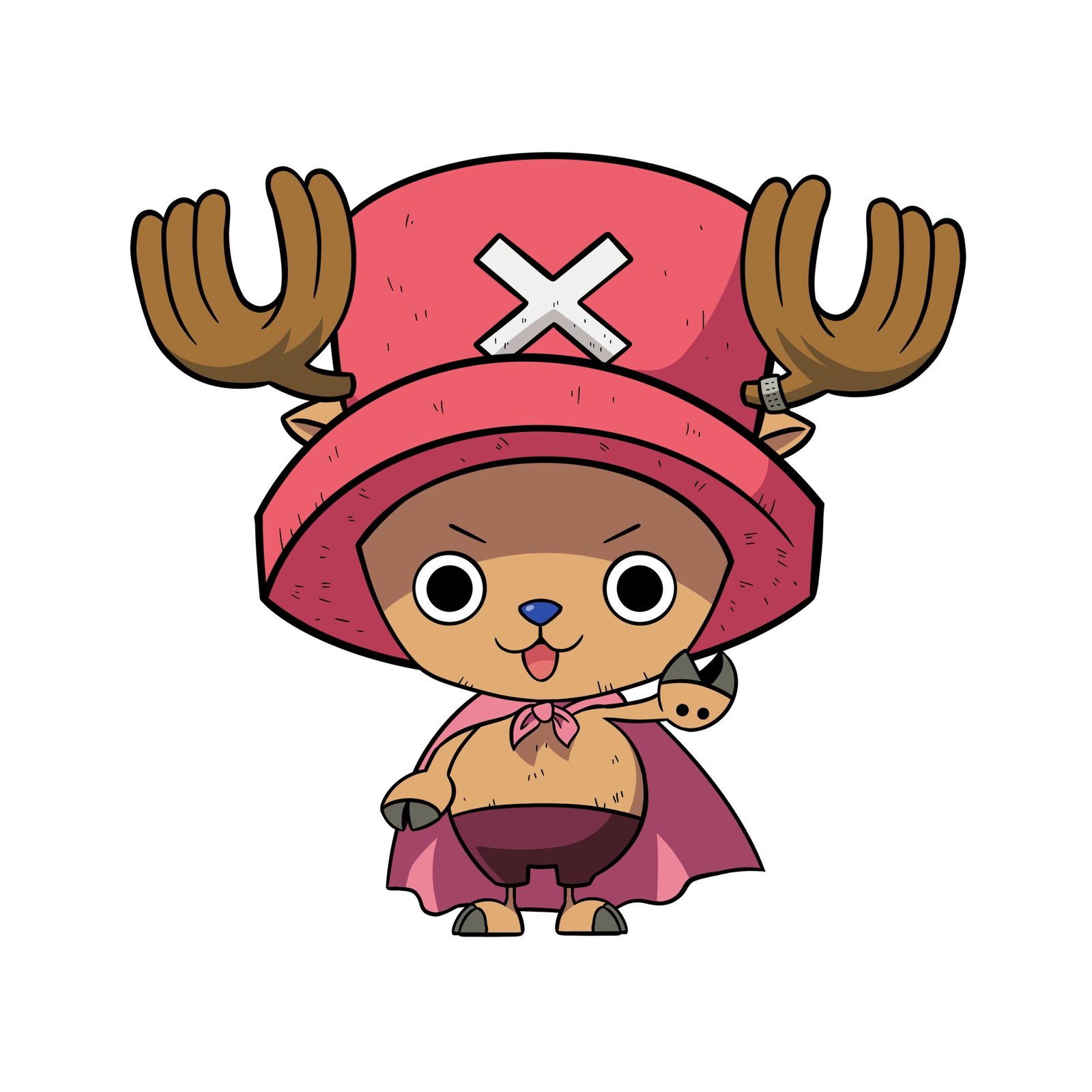 Let’s get started with the Tony Tony Chopper Drawing.

Tony Chopper is a fictional character featured in the manga and anime series “One Piece.”

He is the doctor of the Straw Hat Pirates and joins them during their journey.

Here’s a simple tutorial on drawing him with just a few lines and dots.

He has big, round eyes, large lips covered with bandages, two antennae protruding from his head, and a green nose.

He is always seen wearing shorts or pants topped off by an oversized lab coat with many pockets for storing medical instruments.

Stick with us till the end & learn Chopper Drawing in no time.

How To Draw Tony Tony Chopper From One Piece To draw the chopper’s pose, start with a very big circle, this circle should be big so that other features can fix it, this circle is the head. Draw another horizontal line on the vertical line, this line should be below the circle (one-third of the circle).

Draw a small vertical line to mark the end of the horizontal line, this is where the eyebrow will be fixed.

Draw an ellipse on the big circle which meets the small vertical lines marking the end of the horizontal line(that was drawn inside the big circle).

The eyes are under the eyebrows and above the nose.

The space between the circles is the iris.

The nose is under the eyes, and it’s also above the mouth; drawing the nose is also another easy step in achieving the completion of the facial features.

Draw a small concave curve and cover it up with another convex, the convex (down) should have more depth than the concave, and the nose should be aligned so the vertical line that runs through the head will be at the center of the nose.

The mouth is below the nose and is attached to a tongue.

The chopper’s jaw is very easy to draw; trace the lower part of the big circle (head) into the jaw shape of the chopper; the jaw is very wide and has an attachment at the left side of the face (left hand).

The appendages here mean the hands and the legs.

To draw the hands know that Chopper has two shorthands which are left and right hand.

To draw the left hand, draw a small circle beside the jaw and attached it to the ellipse.

Draw a curved line inside the circle so it looks like the circle is divided, draw two vertical lines forming a “V” shape on the upper part of the curved line.

Draw another vertical line on the left side “V” shape so it looks like the upper part of a crab.

For the right hand, draw a curve line from the right side of the circle (head).

Draw a circle at the end of these lines, draw a concave curve inside the circle, and draw a vertical line at the center of this concave curve.

Finish the right hand by joining the vertical line to the two ends of the concave curve so it looks like the top (mouth) of a crab, this is the right hand, for the left hand draw two small circles under the vertically curved line of the hand.

Draw two curves from the sides of the circle of the stomach to the bottom of the circle but make sure the two lines are not close together.

The space between these curves is what separates the legs.

Draw two vertical lines downward at the center of these curves, this is the legs.

To draw the shoes, draw a semi-circle at the end of each vertical line.

Draw a horizontal line joining the ends of these semi-circles together, draw a curve inside the semi-circle, and draw another curve from the end of this curve downward, so it shows the front part of the shoes.

Chopper is using a robe with a knot in front of the robe.

Drawing the robe is very easy.

For the left vertically curved line, make sure it passes through the left hand.

Draw a horizontal line like a wave-like pattern to the left side of the shoe.

Draw two circles which is bigger than the first circle at the sides of the small circle in a way that the two circles are a bit far apart.

The circle on the right side of the small circle should have a sharp edge, so it doesn’t form a full circle but looks like a semi-circle.

Inside the right circle, draw a small oval shape attached to the small circle of the knot.

Inside the left circle, draw two bent vertical lines inside it. Still, these lines should not be too close together.

With this step, you are done with the front part of the robe (robe knot)

The hat is another important part of the chopper’s outfit.

The hat is very big that it covers the whole head of the chopper and has only the features of the face left.

Therefore, the concave must be as wide as the ellipse.

Draw another concave under the first concave leaving a little space behind, this is the first step to drawing the hat.

Draw three different vertical lines on the head and ellipse.

Draw two vertical lines on the ellipse beside the head and draw the last vertical line at the center of the head.

Draw a convex curve at the two sides of the vertical lines.

Make sure the convex curve is resting little on the two vertical lines at the sides.

Draw a horizontal line joining each end of the convex together so that it looks like half of a circle (diameter).

Draw a vertically curved line inside these half of a circle(diameter).

Draw curves at the sides of the ellipse of the head.

Make sure the curves are facing the ellipse.

Draw a vertical (straight line) at the center of these curves.

Draw curves from the bottom of the diameter to the curve you drew on the ellipse, this curve should exceed or extend out of the curves.

Draw another curves line beside these already existing curves and join them together using small curves so it looks like the thumb.

Draw an “X” alphabet (using a block method in order to make it bold) at the center of the vertical line you drew in the middle of the three vertical lines of the hat, and draw another concave curve above the facial features of the head and below the two curves of the ellipse.

Draw a slightly convex curve under the vertical lines that you drew inside the diameter.

Add Details In Your Chopper Drawing

Draw two separate vertically curved lines inside the thumb of the left side of the hat.

Make dots inside the space of the two vertical lines you drew inside the thumb.

The thumb on the right side of the chopper doesn’t have dots, make dots on the ellipse without touching the facial features (face), and makes dots at the lower parts of the “X” that was written in the block which was at the center of the vertical line of the hat.

Make dots on the jaw, and draw a small curved horizontal line at the bottom of the small circle (stomach).

Draw a slightly curved vertical line joining from the end of the horizontal line to the right thigh, making small dots inside the stomach. And finally, erase all the excess dots and lines in your drawings. Chopper Drawing is very easy, all you need to do is get all the necessary materials needed for your drawing.

Most importantly, you can get a picture or image of a chopper for a better reference.

Know that drawing may take time, but it will surely come out well when you give it your time.

With all these steps am sure you can easily draw a chopper at your convenient space and pace.