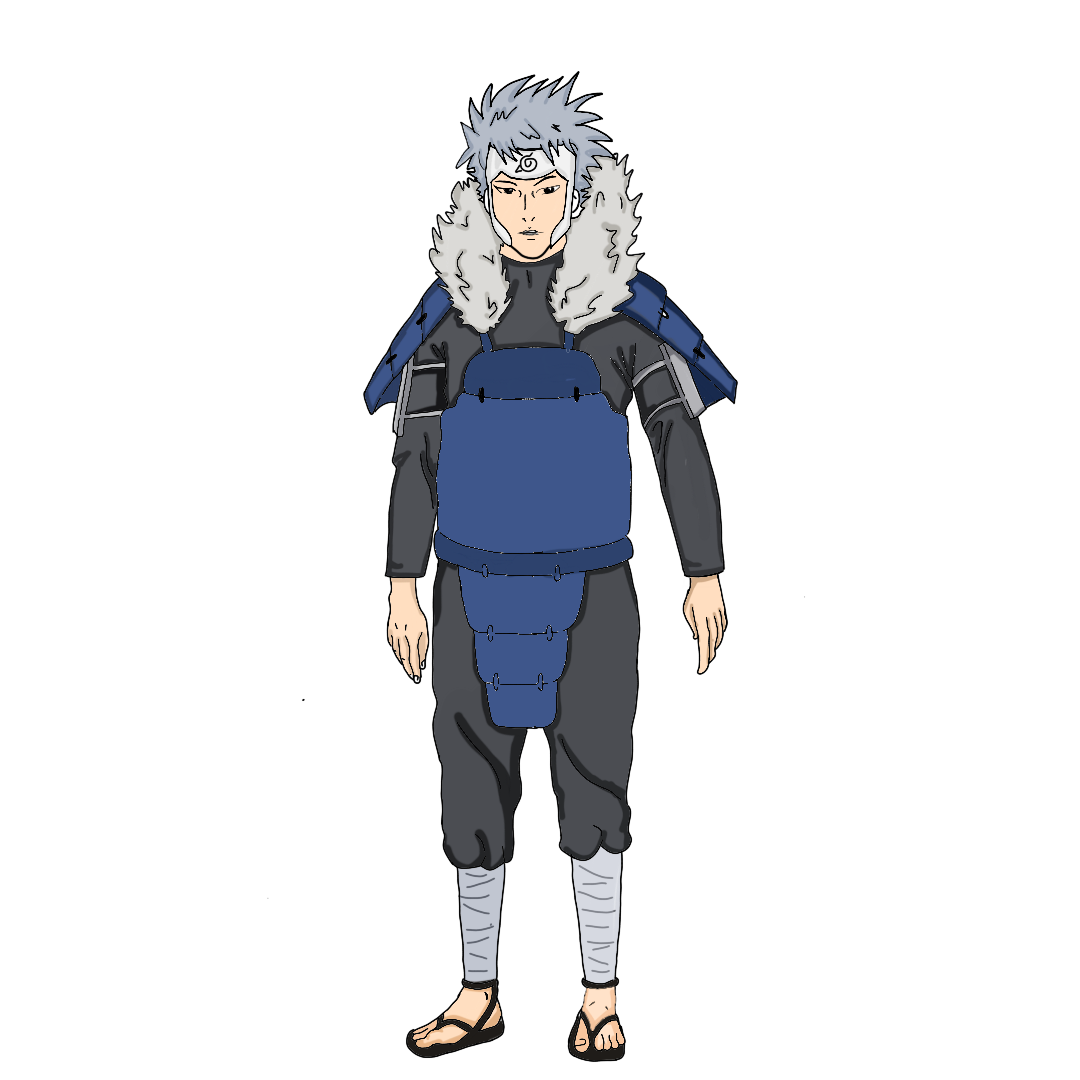 Are you looking for a less stressful way of drawing Tobirama? If yes, I got you already. Follow these steps below and have fun.

Tobirama is a protagonist of the anime Naruto Shippuden that is focused on his life as a famous ninja.

He was part of the legendary Seven Ninja Swordsmen of the Mist.

He is very kind but also strong-willed, determined, and leader-like.

Tobirama wears an amour which serves as body protection and uses a head protector with a specific symbol. He’s fond of wearing sandals, and kids love him because of his ability to perform magic.

For Tobirama’s drawing, we will begin with his pose.

For the head, draw a circle that should be oval (ensure the circle is not too big or small).

Ensure that there is enough space between these horizontally curved lines and draw a vertical line so that it crosses the horizontal lines on the circle.

Draw a rectangular shape for the chest so that it’s under the circle of the head and leave space alone for the neck to be fixed.

For the waist, draw a circle under the rectangular shape of the chest, but this time the circle should be bigger than that of the head, and make sure it is a circle so that we can have the natural shape of Tobirama’s waist.

For his arms, draw a slightly bend line from the two sides of the chest pointing down; these will serve as the left and right arms.

Finish up the pose by adding the basic shape of the hands, feet, and vertical line for the neck; the hands are pointing down, and for the feet, the right feet are pointing to the right direction of the body while the left feet are facing forward.

With these few approaches, you can easily tell that Tobirama is in a standing position. You can now confidently move to the next step since you already have the pose sketched. 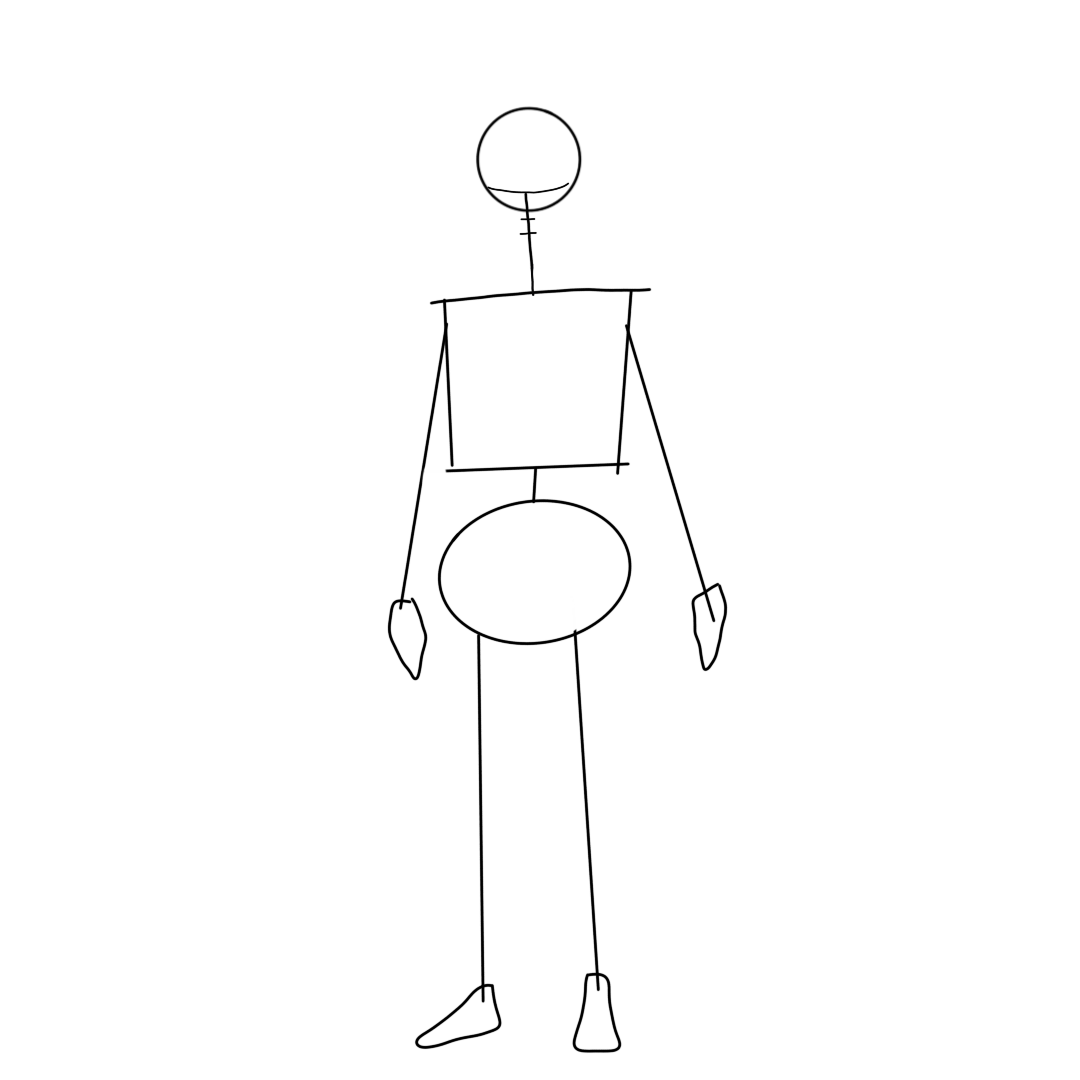 Tobirama uses a head protector (gear) to keep him from being injured.

Draw Tobirama’s headgear so that it is attached to the jaw and covers the left and right sides of his face. The headgear looks more or less like the frontier part of a helmet which is iron in nature. 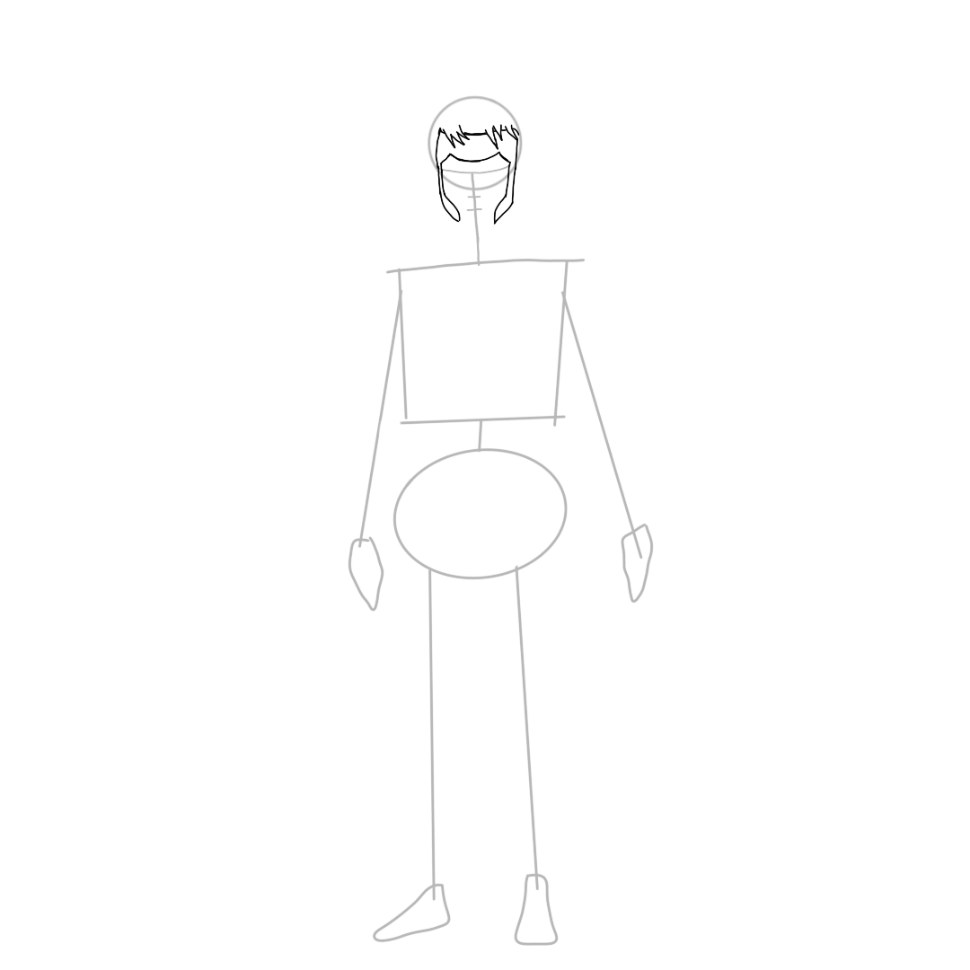 So let’s start with the eyes.

For the nose, make two dots on the horizontally curved line of the nose; that the vertical line of the head is at the center of the dots of the nose.

Tobirama’s ear is one of the easiest facial features that can easily be replicated; draw a curve at the sides of the head so that the ears are attached to the headgear.

For Tobirama’s mouth, use a thick line to trace the horizontally curved line you drew for the mouth.

Please keep it simple, don’t overdo this, and don’t forget to add the eye lines at the sides of the eye’s shape. 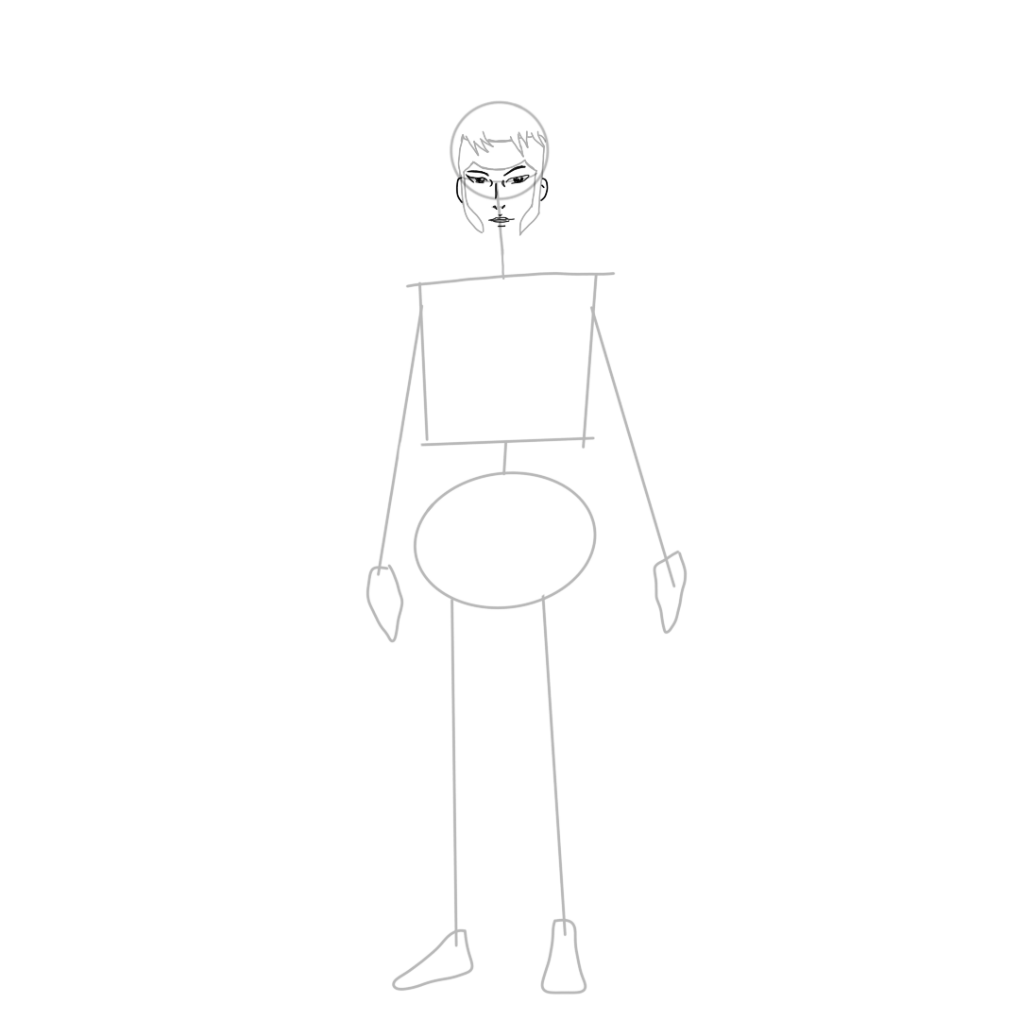 The next step is to draw his face tattoo; the face markings are one attribute that gives Tobirama high looks.

People tend to be scared of him because of his face tattoo.

Use the thick line to draw a little slant vertical line on his cheeks and a vertically straight line under the horizontal line of the mouth (on the chin). 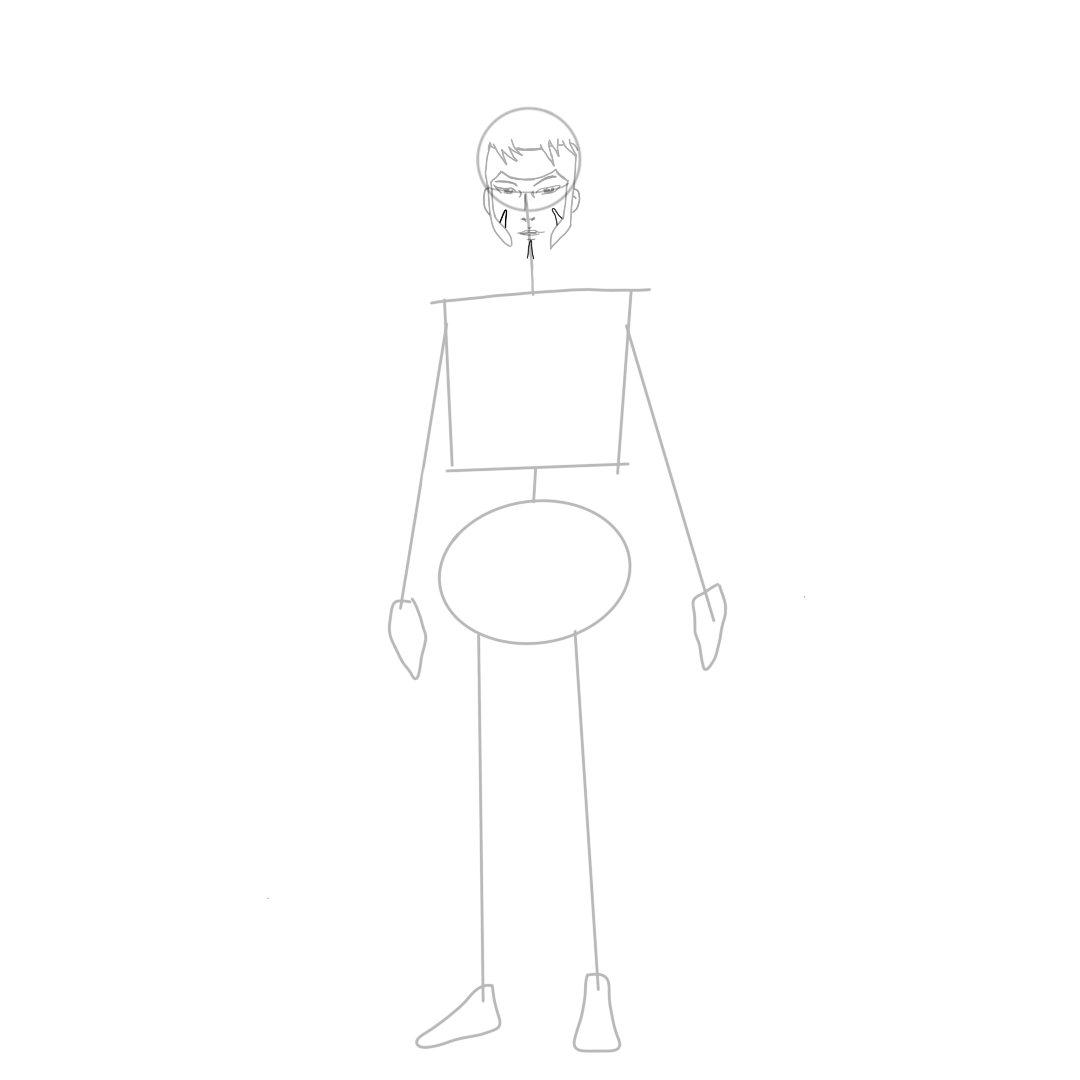 This is one of the technical parts of the drawing, so you have to give it all your attention. Tobirama’s hair looks spiky in pattern, and they simply are pencil down using a zigzag line. His hair is partly covered by the headgear.

Begin by adding a horizontally curved line at the upper part of the circle of the head and add random lines coming together to form edges pointing towards the forehead.

Use the zigzag line to draw the upper part of the hair, which looks spiky in a pattern. Ensure the sharp edges of the top of the hair face the left side of the head, with two sharp edges facing the right side. 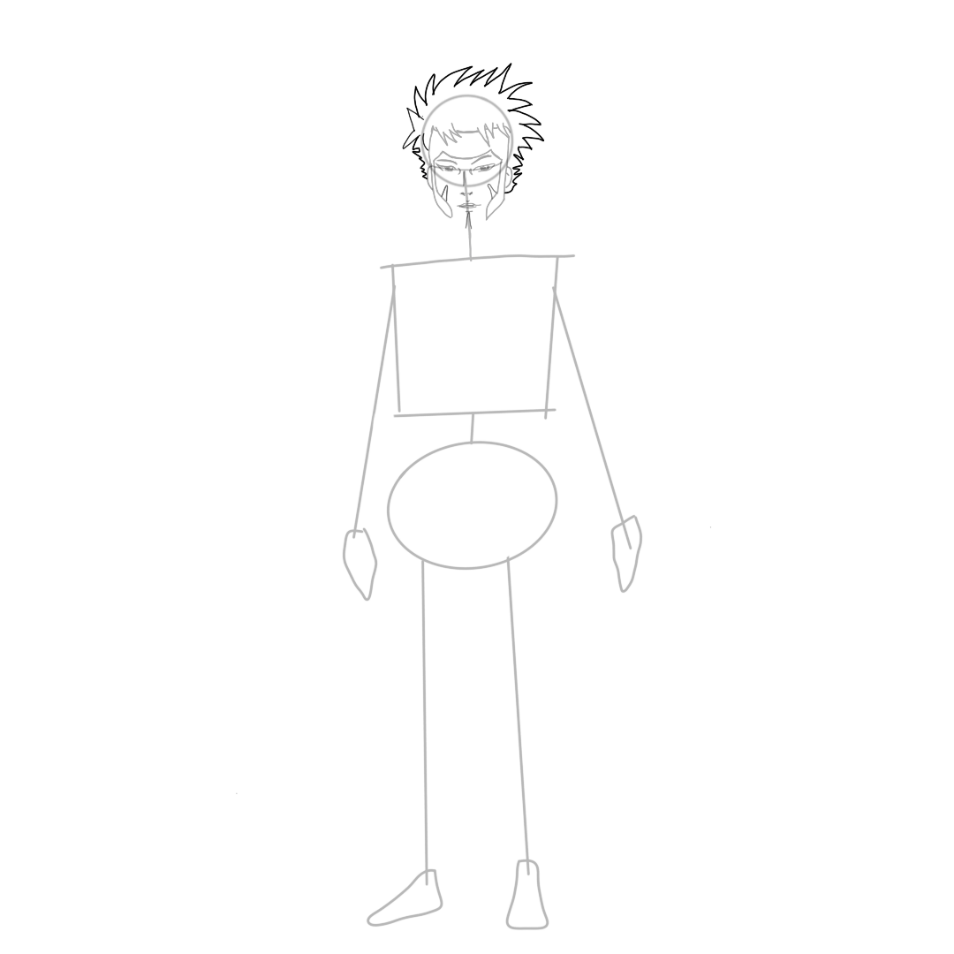 Draw the Symbol on Tobirama’s Headgear

I am sure you cannot wait to draw the symbol on his headgear. Draw a spiral pattern with a small sharp edge pointing towards the head’s right side. 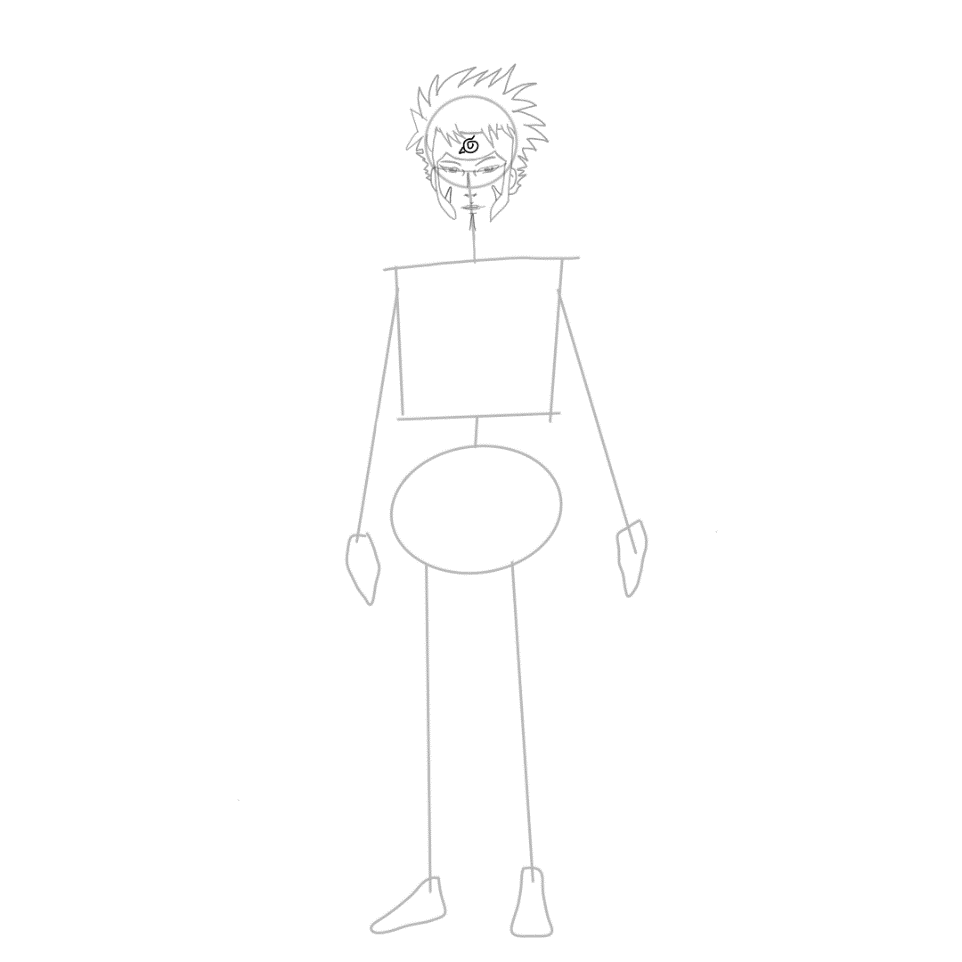 For this step, I will be dividing the approaches into two; the upper part (this also includes the shoulder) and the lower part of the armor.

For the upper part, draw the neck using a line and draw a curve around the neck, so it serves as the armor which surrounds the neck, use a wavy line to trace the curve into the natural shape of the armor (so that it is attached to the neck and also touches the sides of the chest.

Add more wavy lines inside the shape of the armor to make it real.

The lower part, this part covers the chest and also extends to the middle of his legs.

Draw a little double vertically slant line from the wavy line of the upper part of the armor on the chest and add a curved line (in the form of a concave curve) under these doubled lines. Join the ends of the concave curve together with a horizontal line.

Now add the shape of the body of the armor, which looks like a roughly sketched rectangular shape with a horizontally curved one at the lower side of the shape. You can now add a curved line at the rough sides of the shape, which will help when we want to draw the arms.

Finish up the lower part by drawing the overlapping pattern of the armor that extends towards the legs so that the first layer of the pattern rests on the circle of the waist. The next step is to draw the sleeves; the sleeves are directly attached to the shoulder’s armor. Draw the little armor connected to the upper part of the arms while the position of the arms remains the same.

You can now successfully add the lower sleeve, so it looks like the continuation of the upper sleeve is in alignment with the position of the arms. We are almost there! I know you like that sound “we are almost there”, but don’t rush your drawing, follow your best pace and have a better result; this is why we provide the fastest and easiest way to draw him without wasting much of your time.

Back to business; draw a vertically curved line from the side of the circle of the waist so that it passes the knee joint but doesn’t get to the ankle of the leg. The next step here is to draw the hands and the legs.

For the legs, this step cannot be too difficult for you since the pant covers two-thirds of the legs (from the thigh to the calf).

Draw vertical lines under the wavy line of the pant so that the vertical line you drew for the basis of the legs is seen in the middle of the lines; draw a little horizontally curved line joining the lines of the legs together, and that it! Tobirama is wearing a sandal that helps to protect his legs; draw the upper part of the sandal with a curve around the ankle, and draw the body of the sandal so that it’s aligned to the direction of the basis you drew for the feet.

Draw the design on the sandal with doubled lines; this will help to segregate the thumb of the feet from the other toes, and you can now draw the toes and the thumb of the legs so that they are strategically positioned in alignment with the direction of the feet.

Quick reminder; the right foot is facing the right side of the body while the left foot is pointing forward. Now, you need to add details to your drawing to have a realistic drawing.

Start by adding details to where you stopped (the footwear), use thick lines for the border of the sandal, and randomly add horizontal lines to the legs.

Add the little oval circle in the form of dots on the lower part of the armor. Use thick lines for the border of the outfit and the outline.

Erase all excess lines and dots on your drawing. You can do this by adding shadow or highlighting to the outfit or outline and shade the pupils of the eyes and colors to your drawing.

Adding colors will determine how attractive your drawing will be. Use a suitable color for Tobirama’s outfit and armor, and the armor can be blue (you can check online for suitable colors, so you don’t miss out on anything). Enhancement doesn’t just add beauty; it is another platform to show your skill. Have you ever wanted to draw Tobirama (your favorite anime character) during your leisure time?

Follow these few steps explained above and you won’t believe how skillful you are.

For a better and easy look, you can get a picture or image of Tobirama, so it serves as a reference while drawing and it helps you against costly mistakes.

Get all the necessary equipment and materials, such as pencils, an eraser, a color pack, and the white paper or drawing book you want to use.

You can also get yourself refreshments to have something to eat while drawing and won’t feel bored. Find a convenient environment for effective results.