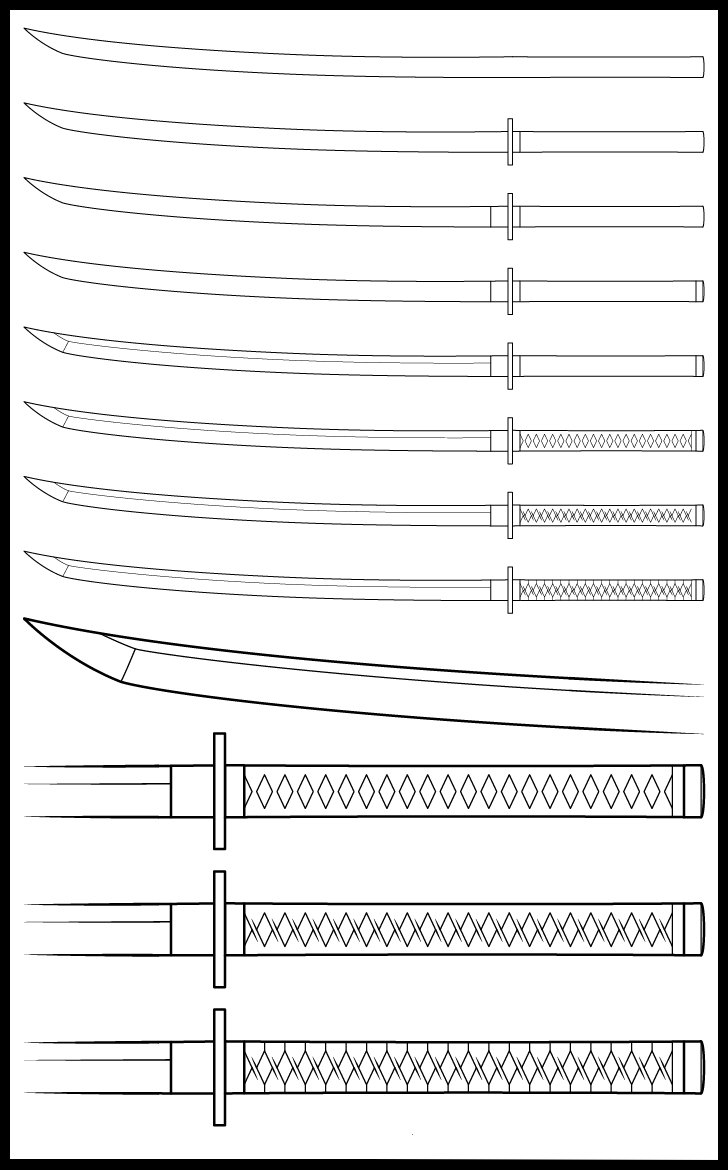 This lesson demonstrates drawing of a Katana in eight stages, with illustrated examples and a full description of the sword’s many sections. Stick with us till the end, at the end; you’ll be able to draw a Katana

A katana is one of the most often seen weapons in anime and manga. It is not difficult to draw one, but it is useful to understand its numerous sections.

The examples in this lesson are of Katana’s side perspective. This angle allows you to see most of the sword’s sections and is pretty straightforward to draw from.

Begin by sketching the combined form of the blade and handle of the Katana. Essentially, it’s a silhouette outline.

This shape’s blade should be slightly curved, with the tip pointing in the direction of the curvature.

Draw the handguard by dividing the handle from the blade. As the name implies, it prevents the hands from sliding onto the blade.

A katana’s handguard is typically slender and not particularly broad. After you’ve finished drawing, erase the portion of the sword overlapping it.

The blade collar secures the sword in the sheath. From this angle, it will be almost the same width as the blade, allowing you to draw a simple division line to represent its length.

The pommel is a cap attached to the very end of the hilt. The end cap is usually roughly the same size as the handle component. Define it with a line similar to the blade collar.

In this scenario, we’ll create a fairly big edge like the ones seen on certain katanas. Trace the curve of the blade to create the edge’s curvature.

Katanas often feature a braided wrap around the hilt. To make this design, draw a line of equally spaced rhombus shapes.

If you’re going to design a simple sketch, you may skip the rest of the details of the handle wrap and end here. Animators and manga artists may also use this to save time.

You may go to the following stage to produce a more detailed drawing of the hilt.

Step 7 – Create the Folds for the Handle Braids

In most cases, the braid of the hand wrap will result in some creases.

You may depict the folds as shown in the image above by drawing lines from the rhombuses’ points facing each other (as in the example above).

Finally, add some split lines from the top and bottom borders of the rhombuses to complete the hand wrap and drawing.

These lines will complete the “wrap effect” exhibited in the preceding example.

You should now be able to make a line sketch of a katana. 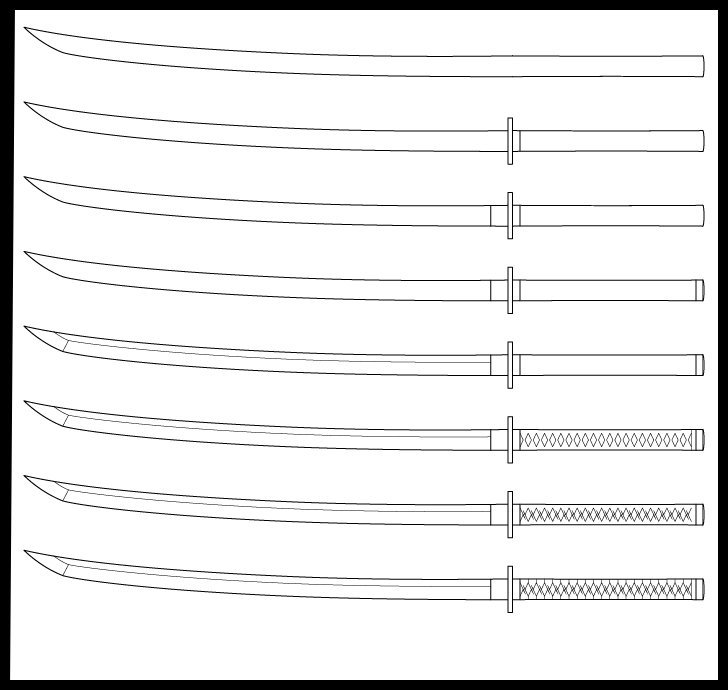 Katanas are a popular weapon in anime and manga. This lesson demonstrates the fundamentals of drawing one, although there is much more to it (such as drawing swords from various angles). Several varieties of katanas appear different from the one shown in this video. However, these swords are generally made up of the pieces specified in the examples, and you may design them using a similar step-by-step process.

The Best Anime Swordsman of All Time