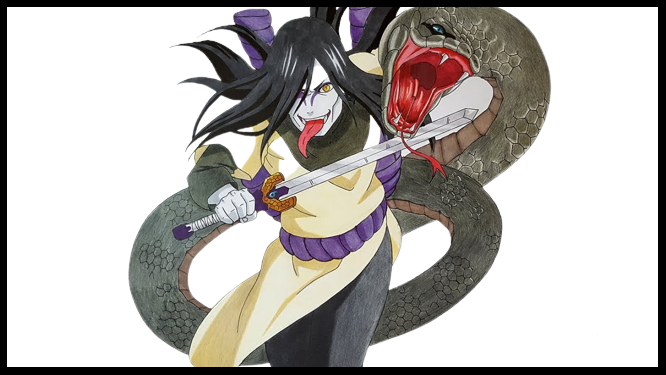 If you are interested in this tutorial and would like to draw Orochimaru yourself, follow the steps below to learn Orochimaru drawing from Naruto in no time!

Orochimaru, one of the three legendary ninjas known as Sannin, is one of the most skilled ninjas to ever exist in the Naruto series.

In order to help out other Naruto fans in drawing Orochimaru, we have created this step-by-step drawing tutorial showing you how to draw Orochimaru from Naruto step by step using basic shapes and simple techniques.

For a drawing like this, all you need is a pencil and a sketchpad.

We recommend using a mechanical pencil (you can buy them at any office supply store) since you don’t have to sharpen it and your lines will be clean and crisp.

Mechanical pencils also tend to write very darkly so if you’re making your drawing fairly simple nose right color, then we’d suggest using one with an eraser on top so that when you make mistakes, you can erase them instead of trying to go over it again.

Finally, make sure that whatever paper that you’re drawing on has plenty of room to use your arms freely!

If it’s too cramped then not only will you find yourself running out of room but you’ll end up having bad posture while drawing.

Easy Step by Step Drawing Tutorial of Orochimaru from Naruto

First, draw a circle for Orochimaru’s head using a compass or by tracing around a circular object of equal size. 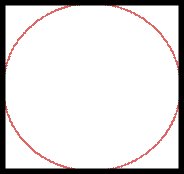 To draw Orochimaru’s body, begin by drawing a large circle. 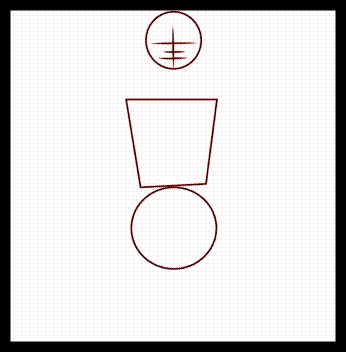 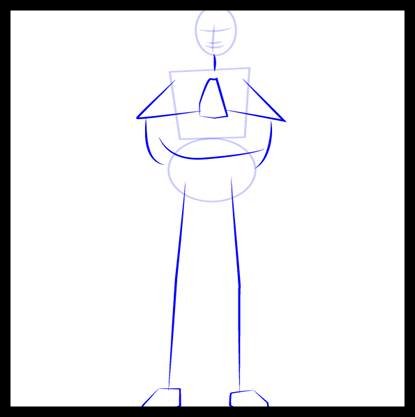 The first step in drawing Orochimaru is to draw his long black hair.

It is advisable to draw his hair straight down as if it was falling freely from above.

When you start sketching, make sure that you don’t leave out any gaps when drawing from left to right, or else it would not be natural.

From here, start adding details on both sides of his hair, making it look as if they were being blown in a way by a breeze or airflow. 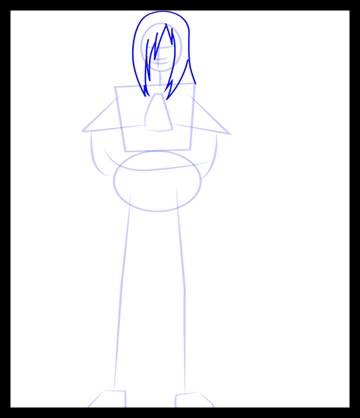 Start drawing Orochimaru’s eyes. His eyes are very unique, so look at how we drew them to make sure you draw them accurately.

His eyebrows also have a unique shape so pay close attention to how they’re drawn and try to mimic that with your own drawing.

Next, move on to his nose which is fairly simple.

The mouth is more detailed though, so go slow and use reference if you need it!

After that, shade his eyes with black ink. 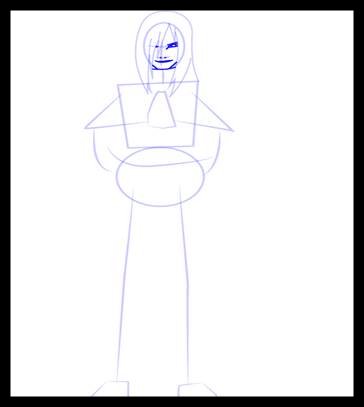 To draw Orochimaru from Naruto, you’ll first need to draw a neckline.

Start at an anchor point and move outwards in both directions.

Connect these two points and use them as guides for his neck muscles.

From there, create a smooth curve that continues downwards until it ends just below his chest.

The middle part of his neck will be thicker than either end, where his shoulders are located. 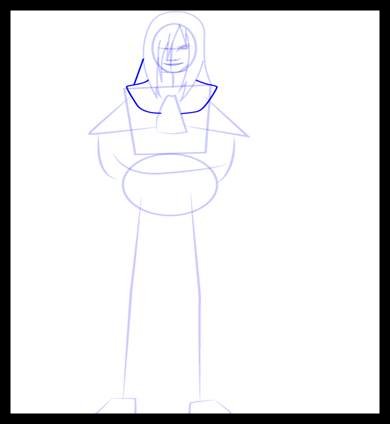 Curl it at an angle to create his elbow and forearm.

Draw a triangle for his hand, then add his fingers and thumb next.

His arms should be out a bit at an angle, so he looks like he’s just raising his hands.

Most of Orochimaru’s physical strength comes from his arms and chest, so it makes sense that they’re big and bulky (they are, after all, trained for strength).

His forearms have pads on them as well; make sure you draw those since they’re a key part of his character design!

The hand is probably one of the hardest things to draw.

It takes a lot of patience and practice to get it right.

But don’t worry; it’s also one of the easiest parts to draw if you just follow a few easy steps.

A basic principle of manga drawing is that characters have their palms facing up and have flat hands with five fingers.

In addition, you want your palms and fingers to be positioned at about chest level for most characters, but for  Orochimaru, we’re going to make them bigger since he has a longer torso than most people; his arms are comparatively the same compared to other characters in many series as well so there you go—the character is larger overall so his hands look closed shape. 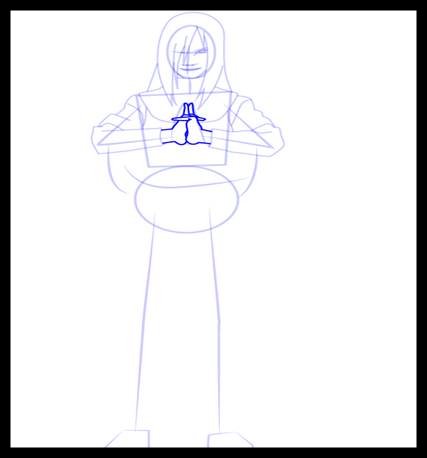 Most anime and manga characters have a very unique fashion sense.

They’re wearing belts that are so much more than something to hold up their pants.

The most popular is a black belt that’s tied off with a rectangular-shaped buckle, but these can be found in all sorts of crazy styles and colors. 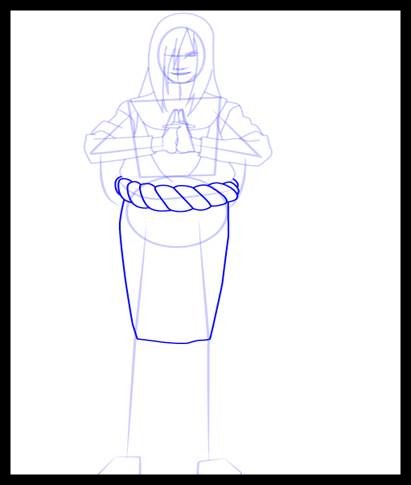 The clothes of Orochimaru are seen wearing a white garb consisting of a shirt and trouser type pants, which have purple lining at their edges.

Underneath, he wears mesh armor with an orange lining.

He wears dark purple nail polish on his fingers and toes, as well as a bracelet around each wrist and another one around his right ankle.

His attire also consists of various bandages that cover his body, most prominent being those around his chest (directly above his heart) and feet to wrap up his battle wounds in such instances.

Legs and shoes seem to be a lot of people’s stumbling blocks when drawing Orochimaru.

There are some cool things you can do with his legs that’ll make them look so much better.

First of all, if you’re drawing her from a side view, like our drawing here, then you’ve to draw short lines for his ankles/shoes. 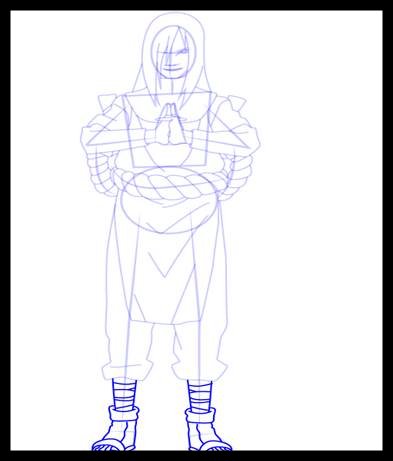 If you go slowly enough and light enough, there shouldn’t be any dark marks left behind at all. 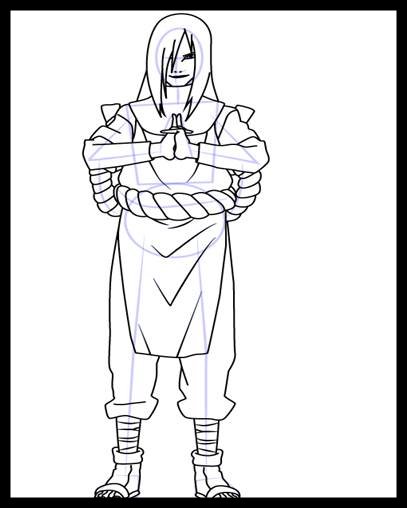 Use colors on your drawing.

This can make your drawing more attractive and colorful, thus enhancing its overall visual quality.

On top of that, it’s also easier to draw in colors than in black and blue, so you might be more likely to stick with it longer.

One way to add color to your drawing is by using colored pencils.

They’re easy to use and easy to erase if you make a mistake!

If you really want a challenge, though, try adding colors digitally.

That way, if you don’t like what comes out at first, then you can easily erase or re-do it as many times as needed until it looks just right! 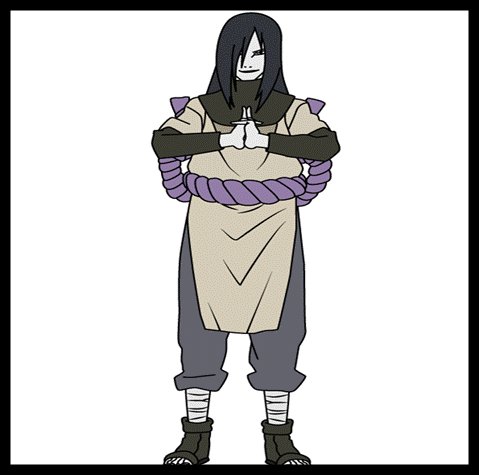 This way to draw Orochimaru is easy and simple.

You can easily draw it yourself at home.

Give it a try.

If you like drawing naruto characters then it’s a good tutorial for you.

Practice more to gain perfection in your artwork.

We are sure that many people would love to see your masterpiece of artwork. Have fun.