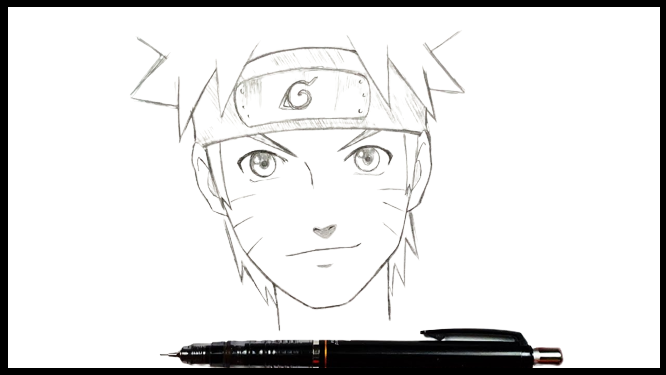 What’s up guys! Welcome to another drawing tutorial and this time, we will learn Naruto Uzumaki drawing.

If you like anime and manga and wanna learn Naruto Uzumaki drawing, then you are in the right place!

In this drawing lesson, we will show you how to draw Naruto Uzumaki’s face, hair, shirt collar, shoulder pads, and hands/fingers step by step

Paper and pencil for sketching.

Black paper is preferable if you’re doing black-and-white drawings; white paper works better if you want to color in your drawing, as it shows off your shading more effectively than black paper does.

Step by Step Guide on How to Draw Naruto Uzumaki Drawing

Begin by drawing a circle.

It doesn’t have to be perfect, just make sure it is symmetrical and centered.

The size of your circle will depend on how large you want your finished drawing to be, but an ideal starting point is 8 x 8.

If you want a high-quality print for display purposes, start with a slightly larger size of 10 x 10.

A pencil is typically used for line art, but if you prefer using markers or ink and are more comfortable with digital editing, go right ahead!

Erase any lines outside of your circle once you have finished drawing.

Draw lines in the circle

Even if you’re not confident about your drawing abilities, you don’t have to be Picasso here.

To draw out a circle, trace around a coin or other circular object with a pencil.

The important thing is that it’s round and it shows up well in black marker so you can see what you’re doing when we do color later.

Start anywhere in that circle and make a line all of one length—it doesn’t matter how long, just as long as it’s all one length and starts at some point in that big circle.

Now make another line beside it, but make sure it’s shorter than your first line so there’s some space between them for your eyes (they’ll be circles).

Draw chin beneath the circle

Use a downward diagonal line from where your circle intersects with your vertical line.

Bring it down until it intersects with a horizontal line that spans most of his face, as you can see in Figure 1 below.

It should be about halfway between his eyes and mouth.

To sketch out Naruto’s chin, use two curved lines coming up from his neckline to form its shape.

This will take some practice; don’t worry if you can’t get it just right in one try.

To start drawing Naruto Uzumaki’s headband, draw a wavy line across (as shown in the picture below) and then extend it down and add a few pointed lines at either end.

Next, draw a shorter curved line near each point of your last wave, extending them out as shown.

With your shapes complete, shade lightly to give it that authentic look!

Now you have a finished outline of how to draw Naruto Uzumaki’s headband!

Look how easy that was!

Practice these steps over again for an even better outcome!

One of the easier ways to draw Naruto Uzumaki is by drawing his ears.

It’s a relatively simple thing, so it’s a good place for beginners to start.

To get started, make two small ovals and then add in another oval that overlaps with one side of each of them.

Next, draw a curvy line around them (see the below picture for reference).

Once you have these shapes done, you can move on to doing his hair.

Naruto’s eyes, like Kakashi’s, are both a very dark blue.

However, they differ in that Naruto’s pupil is visible inside his eye while Kakashi’s is only just discernible.

The most noticeable difference between Kakashi and Naruto’s eyes is how expressive they are; Kakashi’s face remains generally impassive throughout most of the Part while Naruto’s emotions are expressed openly through his.

Let’s move on to How to draw anime eyes.

Start with a small circle. This is where you’ll draw his eyelids.

Next, draw a bigger circle for his eye.

To finish up, add some shape to his eyeball and leave a space for where you’ll draw his pupil and iris.

When drawing him, keep in mind that he has thick black eyelashes and a red dot on each of his eyes (called an inner teardrop).

Also, keep in mind that one eye is usually covered with hair or an eyepatch when he wears it so have fun depicting both!

To draw a nose, start with an oval shape.

The main guideline is that your oval should be 1.5 times as long as it is wide.

Next, add two lines vertically in between each side of your nose; these will indicate where your nostrils are located.

You can make these small or large depending upon how big you want your nose to look.

Lastly, finish up by adding some shading and detailing for dimensions, such as making lines across from his nostrils and giving both sides of his nose depth and detail.

To draw Naruto Uzumaki’s mouth, start with a circle.

Next, draw in his top lip and bottom lip.

After that, draw two curved lines underneath his mouth for his chin.

Then add two small diagonal lines underneath his chin for creases.

Finally, shade in all of these areas using simple circular motions along with some straight-line motions as well.

For example, use a circular motion at an angle for his top lip and bottom lip and then use a straight-line motion beneath them for creases (in other words, there will be 3 or 4 straight line sections).

The result should look something like an oval with a few angles inside it.

The first step in drawing Naruto is to draw his neck.

You can draw a straight line from a small circle, or you can make it round so that it looks more like a real neck.

Next, you should draw his torso and arms, which are large and built-in with lean muscles.

Make sure that his elbows are turned out at an angle for his arms.

Next, you will want to add some details for the rest of his clothes and hair.

Add in some lines across his chest or shirt and add in several short spikes around his head.

Once you have those details completed, then you can finish your drawing of Naruto Uzumaki as he appears in your favorite anime series!

Do not forget that one last detail: black eyes! First sketch out your guidelines.

It’s common for artists to have very precise ones, which is helpful if you’re looking for an exact replication of a character or scene.

If that doesn’t suit you, though, it’s okay to do away with them entirely—most of our drawings are done without any kind of grid whatsoever.

Our approach is a bit looser, but as long as there’s enough detail in your drawing and you don’t leave anything out, nobody will notice or care that they’re missing!

Just make sure that when you erase your guidelines later, you do so lightly—it can be easy to accidentally erase too much when using a white eraser on a dark background like black paper or comics. The first step of how to draw Naruto Uzumaki is to get a grip on his general form.

To do that, you should use an HB pencil and go over your lines heavily.

This will give you a bold outline of his body.

A lot of people skip over that part and move right into linework; however, once you start adding in details such as clothes and facial features, things can get messy real quick if your sketch isn’t clean.

If you want a neat-looking drawing at that point, you’ll have to go back in with your original lines and make them darker.

So try getting those bold outlines down before moving forward with other steps.

However, as easy as it may seem, drawing isn’t something that can be learned overnight.

There is always an art to it.

Just like most other things in life, drawing too has its techniques that you need to learn before drawing your dream image.

The good news is that with proper guidance and practice anyone can easily draw just about anything they want – even anime or manga characters from Japanese comics and animation or manga for short.

One such character that many people wish to draw is Naruto Uzumaki, one of those characters from the naruto comic series created by Masashi Kishimoto. This article provides a step-by-step tutorial on how to Draw Naruto Uzumaki.

If you’re a fan of the anime series, or you just want to learn how to draw a character from scratch, this tutorial is for you.

We would love to see them!