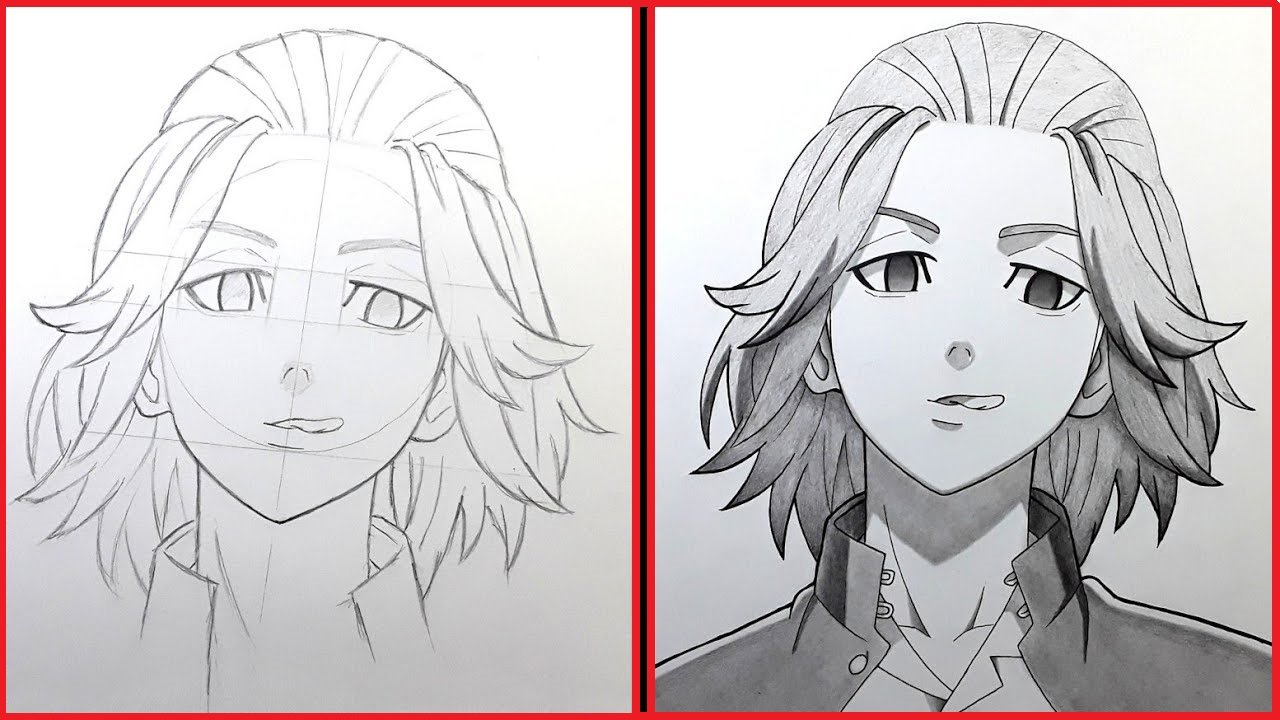 A Step-by-Step Guide to Mikey or Manjiro Sano drawing from Tokyo Revengers. Stick with us till the end.

Do you know who Mikey or Manjiro Sano is and for which anime he works?

“Mikey” is also known as “Manjiro Sano,” and he is the strongest and founding member of “Tokyo Manji Gang” (Toman).

He is a famous character in the anime and manga of Tokyo Revengers, and the story began when Mikey, Baji, Darken, Pah-chin, Kazutora, and Mistuya used to be friends.

But after the accidental death of Mikey’s brother named Sano Shinichiro, who Kazutora accidentally killed, the actual dispute started.

Despite his inferior size, Mikey has been a strong and amazing fighter of the junior high gang group as he used to practice martial arts with his grandfather since childhood.

Mikey and darken were companies after they met in elementary school and became an essential part of the Tokyo Manji Gang.

Today we will learn how to draw Mikey or Manjiro Sano, your favorite and iconic character from “Tokyo Revengers,” it is necessary to have a brief knowledge about the character’s physical appearance. Mikey is a teenage boy with a short height, long blond hair (loosely tied and pulled backward down), and pitch-dark piercing eyes.

So, now we should start our drawing by keeping in mind the physical appearance of Mikey or Manjiro Sano.

It’ll just take your 8-10 minutes to draw Mikey easily & interestingly so, stick with us till the end.

Here we will learn how to draw Mikey Tokyo from Revengers step by step.

So, let’s get started! 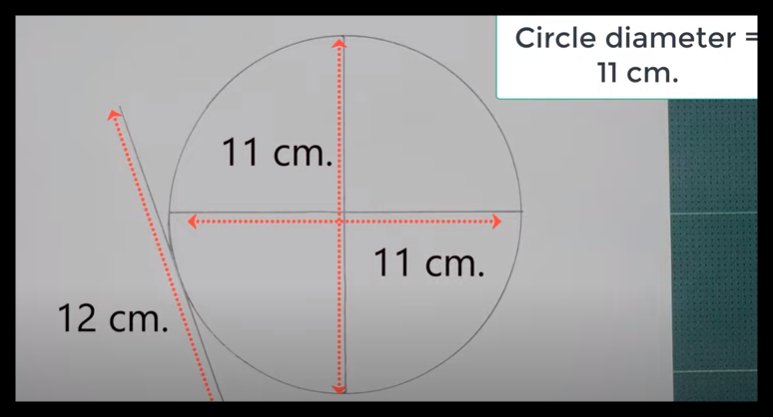 Let’s start our drawing by drawing a circle using a round-shaped plate or a cup, as shown in the reference picture. Use your measuring scale to measure the length of the circle’s diameter. As you can see in the picture circle is divided into four equal parts, and each part should be of equal length, which is 11 cm. Also, draw a line or tangent of 12cm along with the circle, as it touches only one point of the circle, so the drawn line is called the tangent line.

Step 2) Outline the overall shape of the face 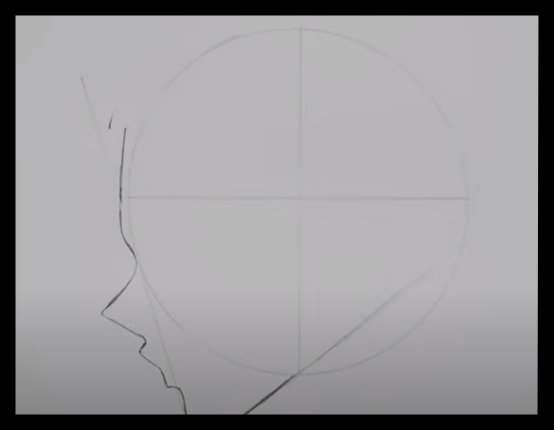 After drawing the circle and dividing it into four equal parts, now in step 2, draw the overall shape of

Mikey by making lighter strokes. To draw the shape of the side face, we should not need to draw all faces; we are just drawing the side shape of the nose, lips, and chin. The tangent line helps us draw the chin a little far away from the circle. Draw a curved line to make the eye space and draw a sharp stroke for the nose tip. Joint these curved lines and strokes carefully to make proper lips and overall face look.

Step 3) Draw the shape of the eye, sided lips, and nose 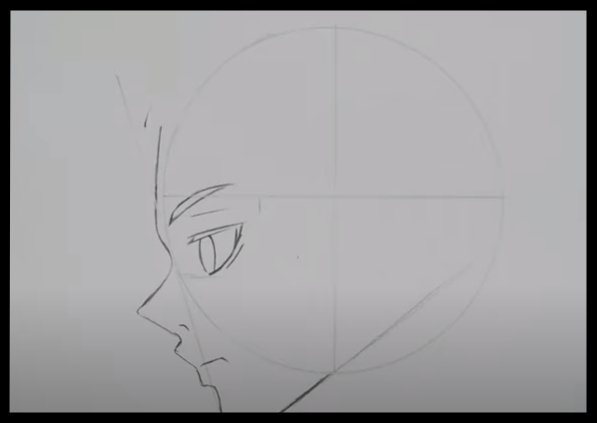 Now draw a stroke to draw the overall shape of the eye. Draw a curved line of 2cm by measuring scale and draw a little straight line at the top left side of the circle on the curved line. Connect then curved and straight lines to make a proper shape. Draw an oval-shaped iris and also an eyelid on the top. Make two strokes above the outline of the eye one is longer, the other is shorter, and join them. Make a stroke in the right between the sharp edges of lips, as shown in the reference picture.

Draw sharp lines or curves for outlining hairs, and strokes should be darker than the strokes drawn for the circle. To Make a shape of pulled hairs backward down, half hairs are tied on the top, and the rest are untied. Draw a stroke or round-shaped curved line just on the top of the circle and three to four for binding hairs. To make a proper look for untied hairs, draw some sharp and loose curved lines over the edge of a circle drawn on the half-circle. These lines or strokes cover half of the circle to make a proper look for the sided face of the anime character. 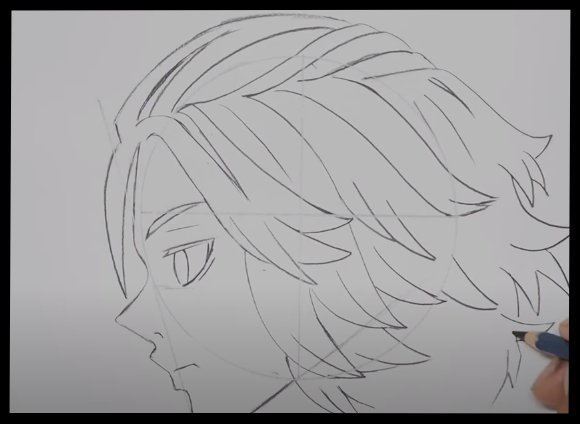 As shown in the reference picture, add details to hairs by making sharp strokes and curved lines. Join these curved lines carefully to make spikes for the hair nodes. Divide the hairs into the layers as the first layers should be at the top for tied hairs, the second layer starts at the ending point of tied hairs, and the third one is the last layer to make loose untied hair. Join the outline of the chin inside the hair outline so that hairs look more realistic.

Step 6) Draw the overall shape of the uniform coat 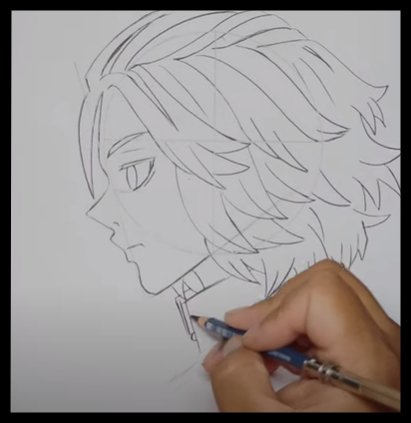 Let’s draw the overall shape of Mikey’s uniform coat. To outline the uniform coat, just start making strokes from inside the edges of hairs, as shown in the reference picture. Also, make some improper little curved lines to draw the shoulder’s outline.

Step 7) Add more details to the outlines of the coat, face, and hairs 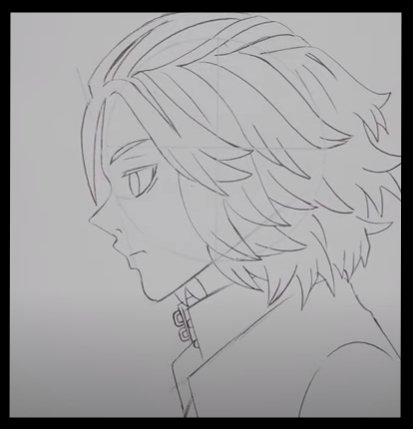 To look more realistic, draw some curved lines for wrinkles on the uniform coat and add details to hairs by adding strokes and curved lines. As shown in the reference picture, make two square-shaped outlines for coat or collar buttonholes.

Step 8) Complete your drawing by shading or coloring 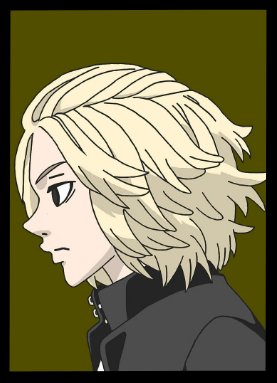 First of all, erase the unnecessary parts of outlines and the circle that we have drawn in the first step to start our drawing. After erasing the unnecessary outlines of the drawing, make the strokes and curved lines darker and smoother so that the drawing looks realistic and creates an anime look.

You can also trace it on any software and turn your anime hand drawing art into colored digital art. For this, you just have to capture a picture of your handmade drawing and then send it to your software and trace the outline by adding layers. After completing your drawing color, it is shown in the reference picture. You can also shade or color the background of your anime drawing. It will create a more realistic impact.

We have completed our drawing hurrah! Does that much difficult to draw in just ten minutes?

In this blog, we have learned how to draw “Mikey,” also known as “Manjiro Sano,” from the famous anime series Tokyo Revengers. It is a step-by-step guide for beginners, and you will learn how to draw Mikey’s anime drawing easily and interestingly.

If you want to learn more drawings and your favorite anime and manga characters, just click the links below.

Also, do not forget to attach your drawings in the comment section!