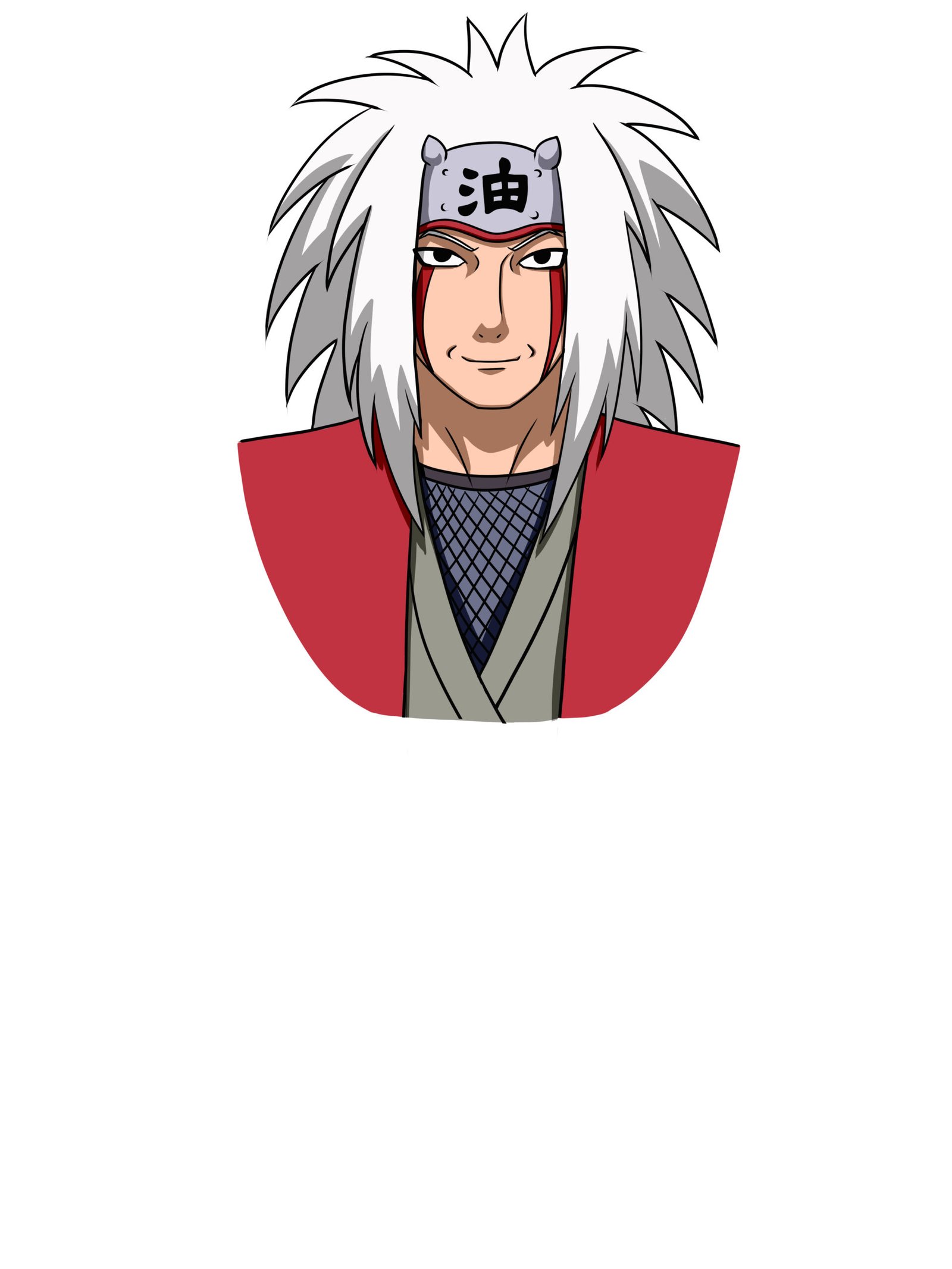 Jiraiya drawing might look complicated or too detailed, but you have nothing to worry about. Let me walk you through a few steps to Jiraiya drawing from Naruto Shippuden without stressing yourself.

Jiraiya, also known as Naruto’s mentor and godfather, is a character in the popular manga series.

He frequently has a rather childish personality with an affinity for cheap tricks and pranks.

Jiraiya has a tattoo on his face and a symbol that makes him unique among others; Jiraiya has spiky hair that covers his whole head, and he wears a round neck with a wine color jacket.

Let’s get started with the Jiraiya drawing without further ado.

Begin with a circle 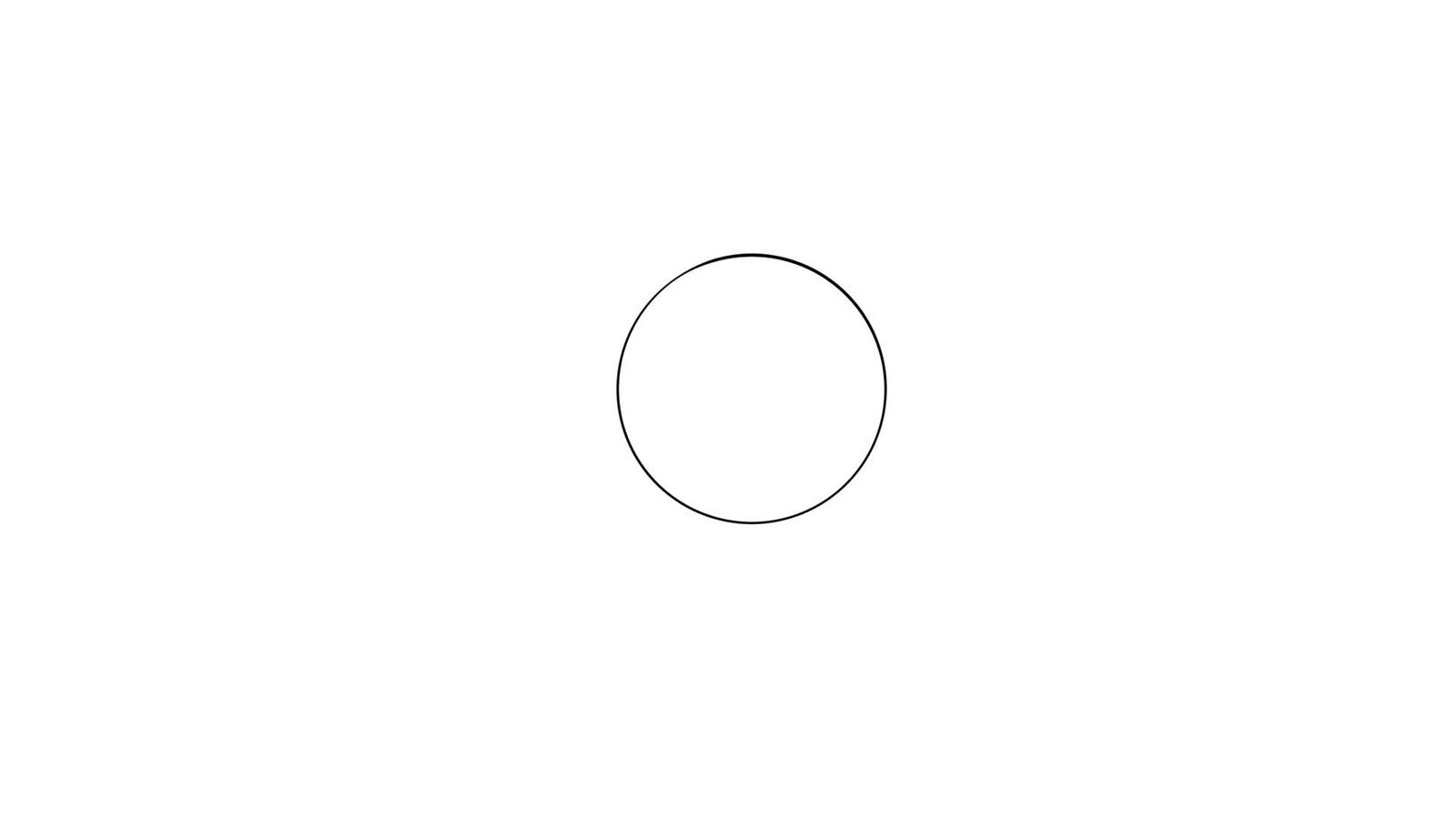 To draw Jiraiya’s head, you must first make a big circle; this is the first step, and this circle should not be too big so that it can fit the structure of his body.

Make sure the shape is not one-sided and not oval. 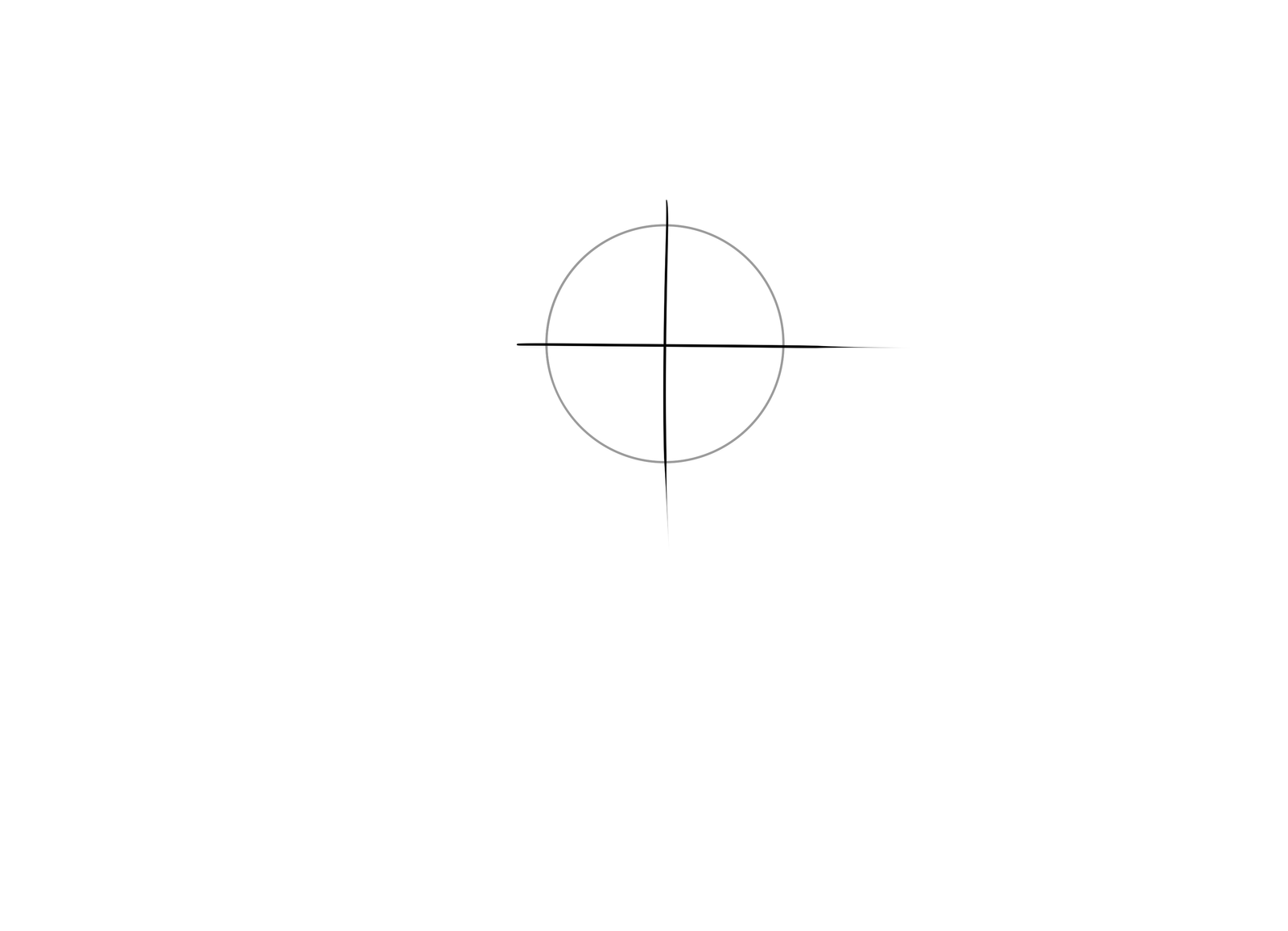 The next step to drawing the head successfully is to make some lines so they can serve as the primary approaches for the features of the head.

Make a vertical line at the center of the big circle of the head so that it exceeds downward and the shape of the jaw can be drawn. 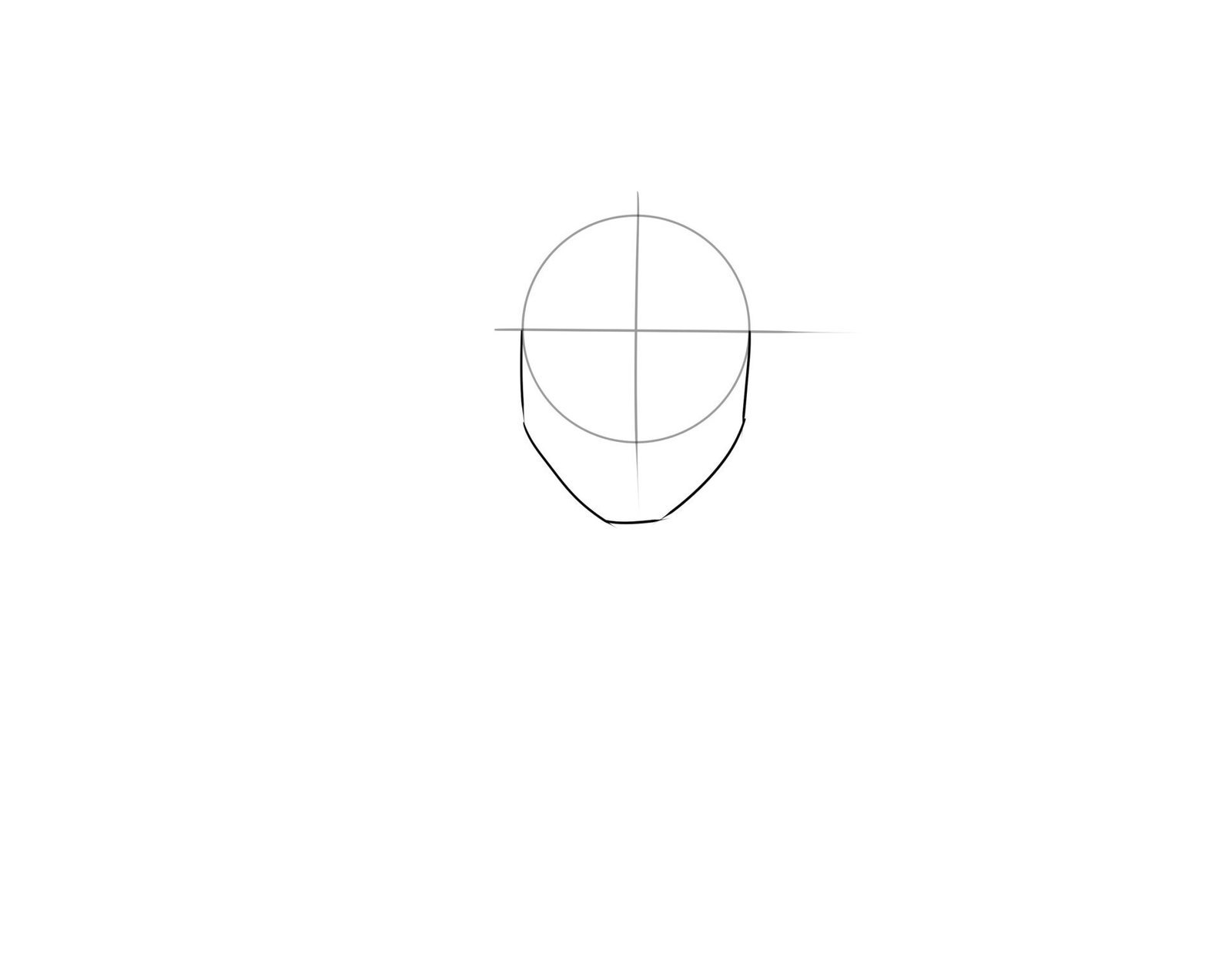 The jaw has an amusing shape that can be drawn using lines, you wouldn’t want to miss this.

Draw another slant vertical line at the end of the first one so that these vertically slant lines look at a point inwardly.

Draw a horizontal line joining these slant vertical lines together, so it forms the chin of the jaw.

Make sure the vertical line that runs through the circle of the head which was extended downward should also be at the middle of the jaw shape so it won’t be one-sided. 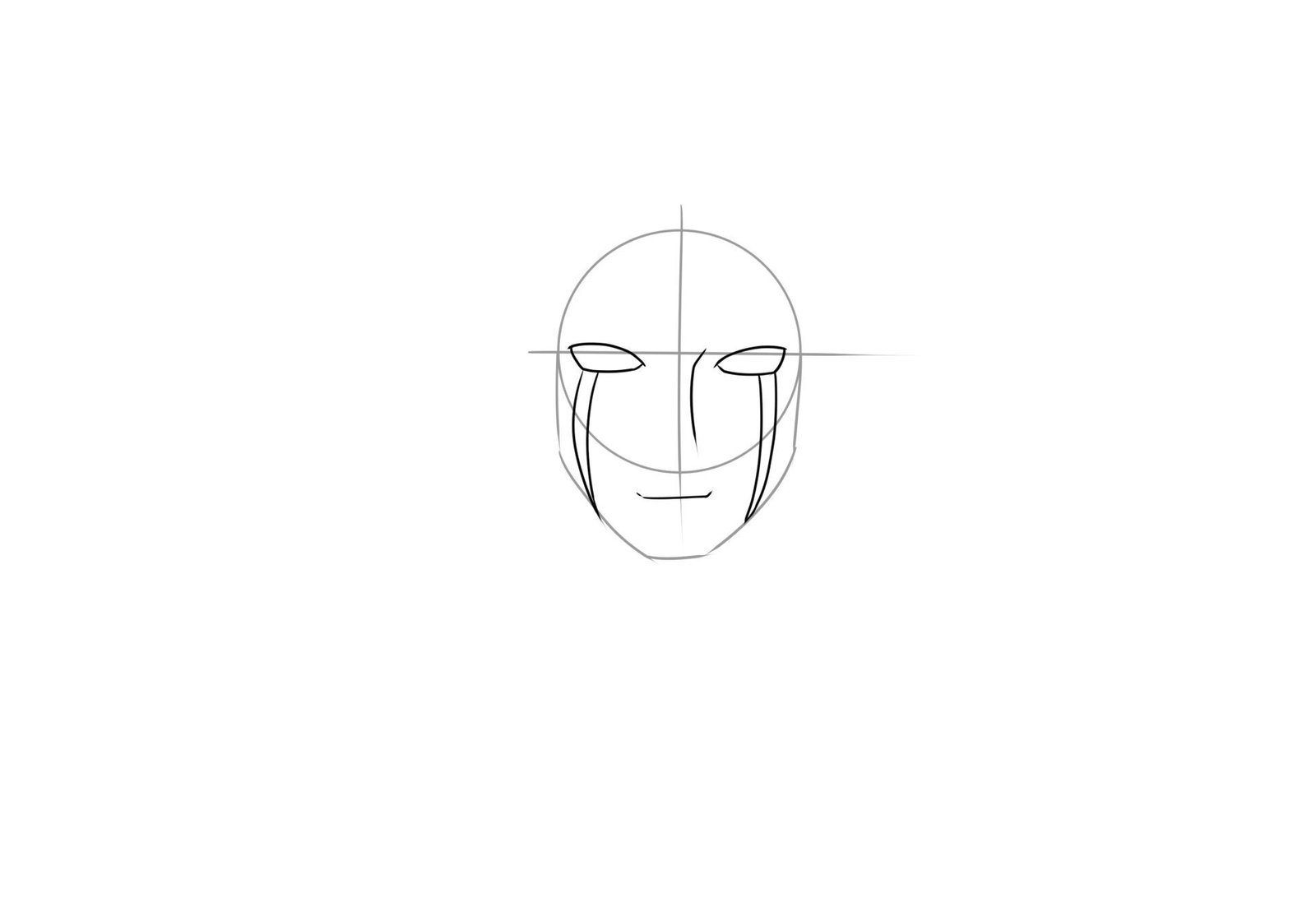 The eyes are also another easy step that you can quickly draw with a few steps,

Draw the upper eyelid with just small curves at the upper part of the horizontal line that you drew for the basics of the eyes.

The nose is on the right side of the drawing, which seems attached to the eyebrow.

draw a slant line close to the right eyebrow and extend it down so it forms the vertical line of the nose.

For the mouth, draw a horizontal line under the circle of the head so that it crosses the vertical line that extends out of the circle.

Draw small vertically slant lines at the end of the horizontal line so it forms the natural shape of the mouth.

The tattoo is attached to the eyes, which makes it look like tears or crying; the tattoos are on his face, which extends from the eyes to the lower part of the jaw.

Drawing two vertically curved lines from the end of the curve and back of the horizontal line of the eyes.

In contrast, the right side faces the left side so that these curved lines look or point inwardly, and this is for the tattoo. 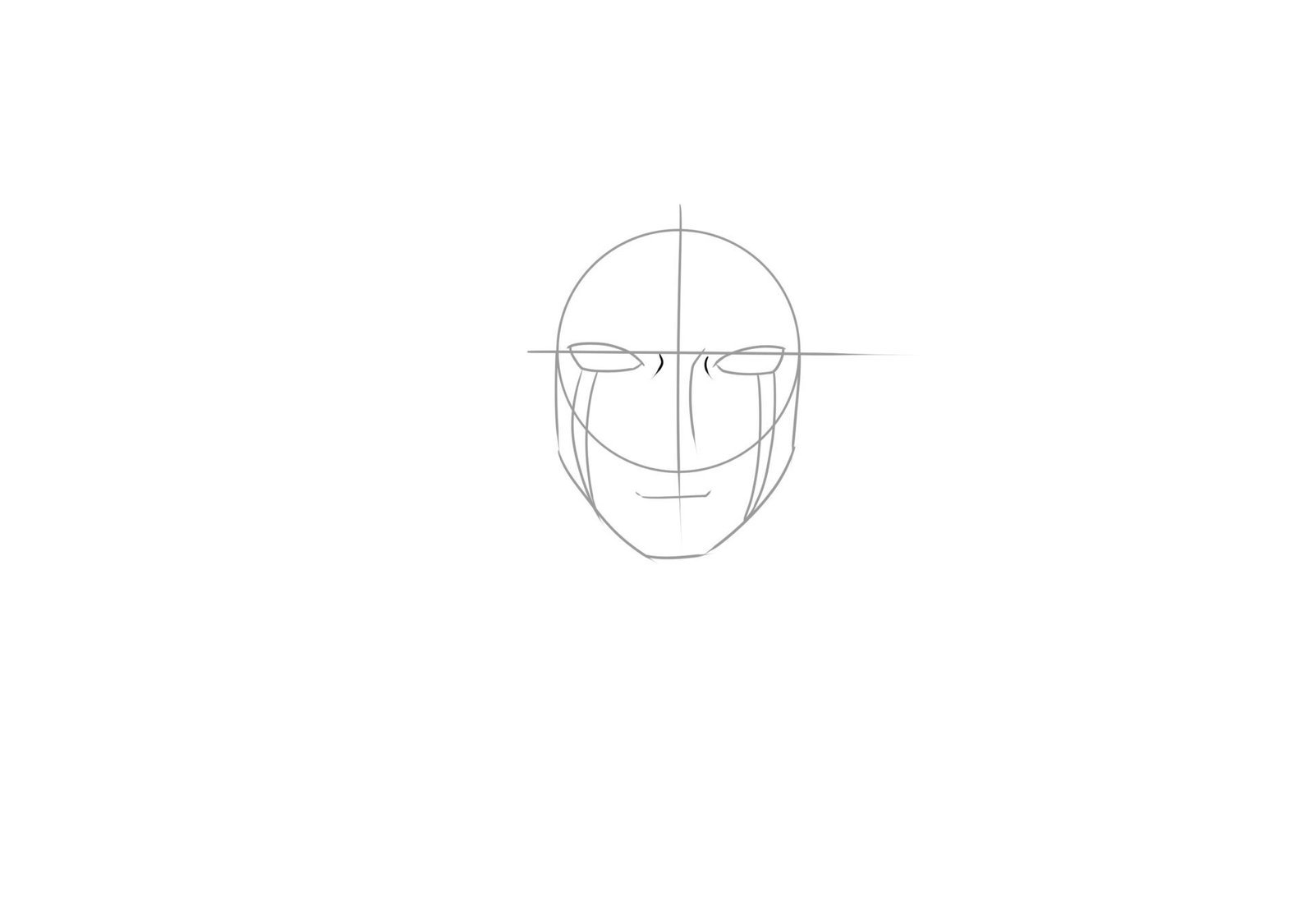 To draw the nose, you must know the positioning of the nose under the eyes and above the mouth.

Draw a horizontal line at the lower part of the circle of the head which will serve as the last step of the nose. 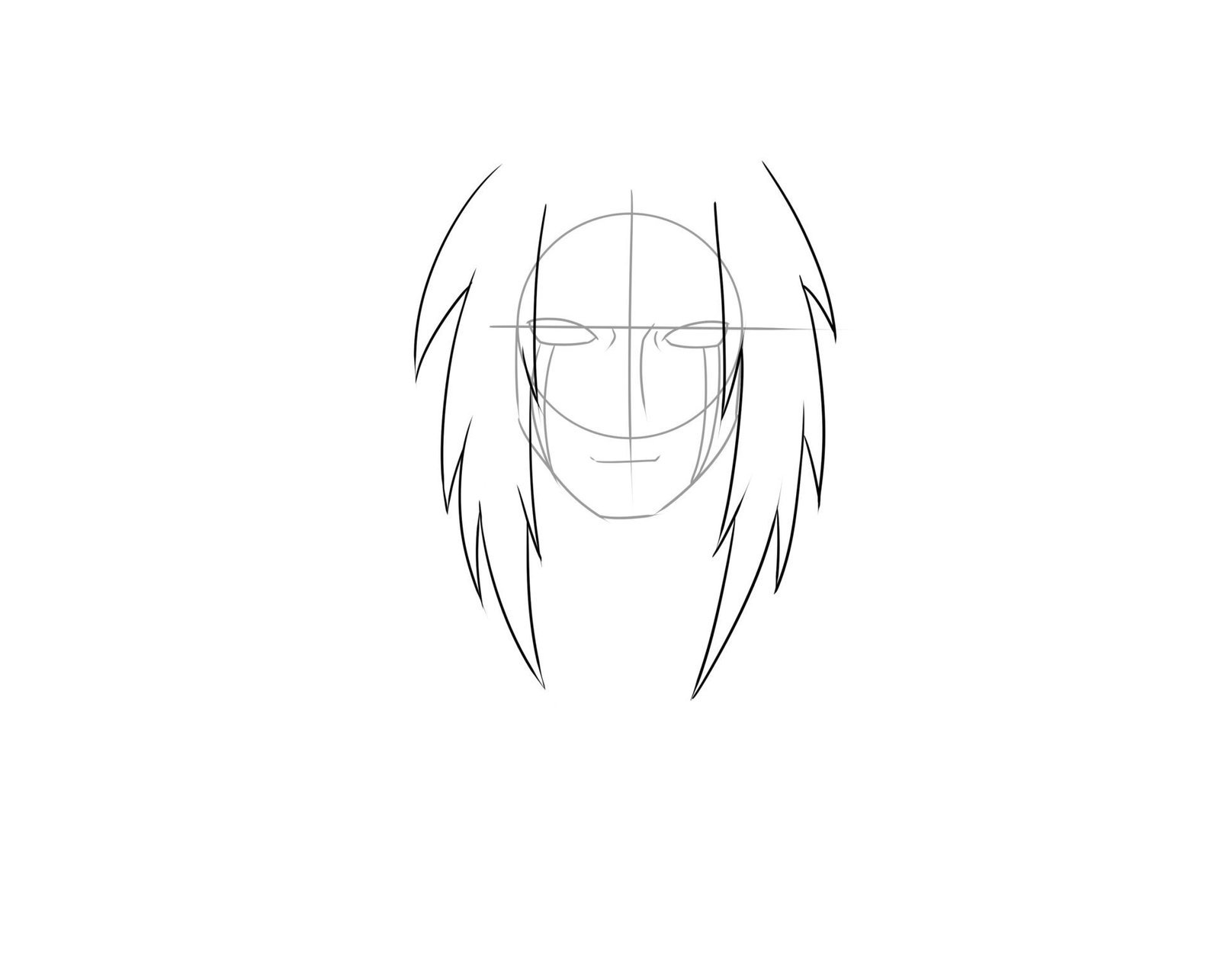 Make a vertical line beside a concaved curve representing his headband, so that it’s extended outside the circle of the head and close to the mouth.

Draw another vertical line from the sides of the slant vertical line so it extended outside the shape of the jaw, this shows the length of the hair.

Draw two slant lines (a long one first and a short one under) so that they form an edge beside the circle of the head.

Draw another long slant line so it forms another edge while it joins to the small slant line of the first edge.

Repeat this again but this time the edge should be pointing downward.

Make another two edges joining to the short slant line of the last edge but this time the two edges should be of the same length.

Draw the previous slant line that joins the vertical line from the jaw to the line of the edges so it forms the border of the hair.

You can start drawing the hair from the right side of the left side of the head, it’s the same approach for the two sides.

Begin To Draw the Konoha Headband 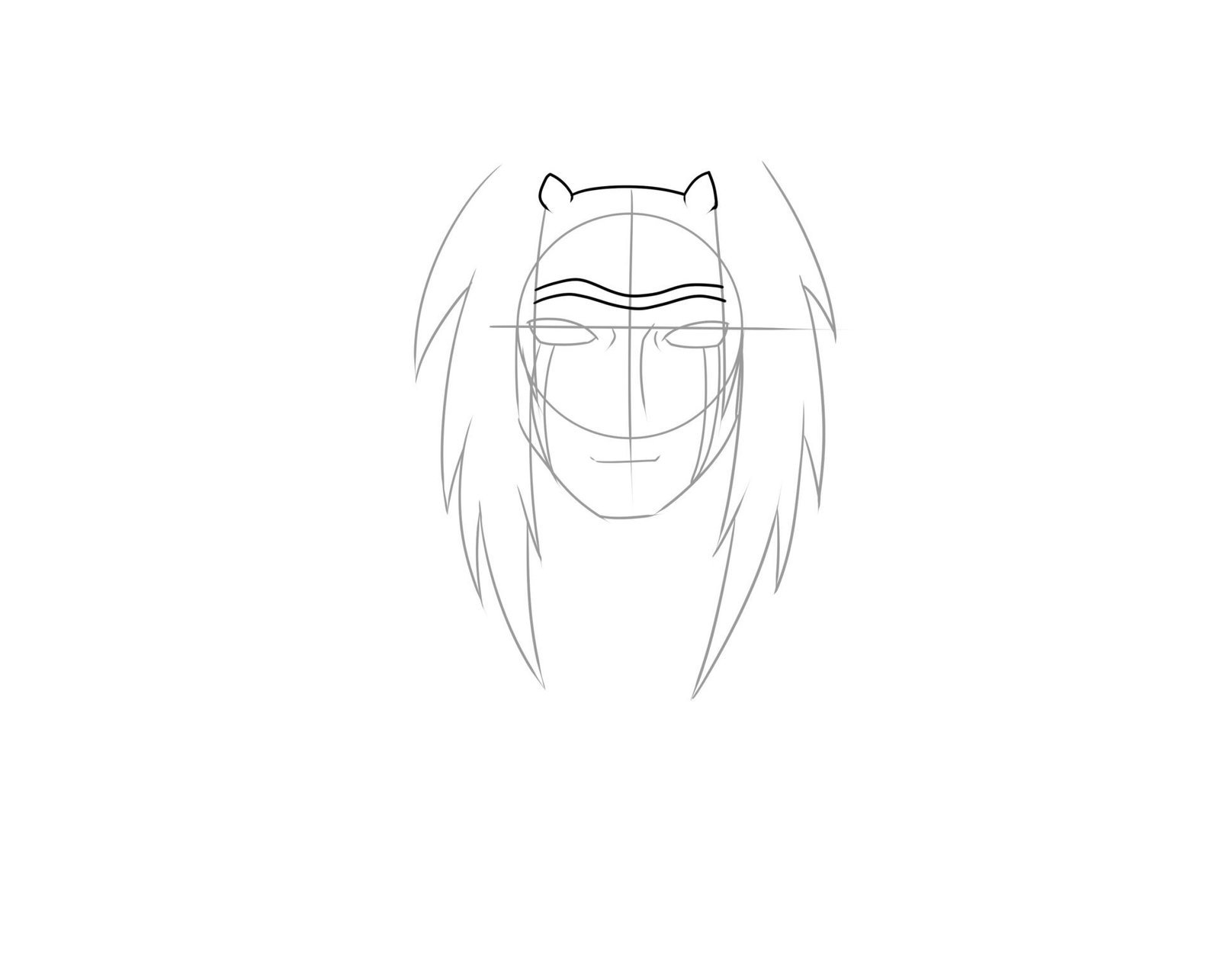 For the headband, draw two concaved shapes so it forms a little edge facing the sides of the circle of the head.

This concaved line should be attached to the upper part of the vertical line of the hair, so it looks like a horn on his head.

Make a curve joining the upper end of the two concave curves, so it forms the upper and front part of the headband. 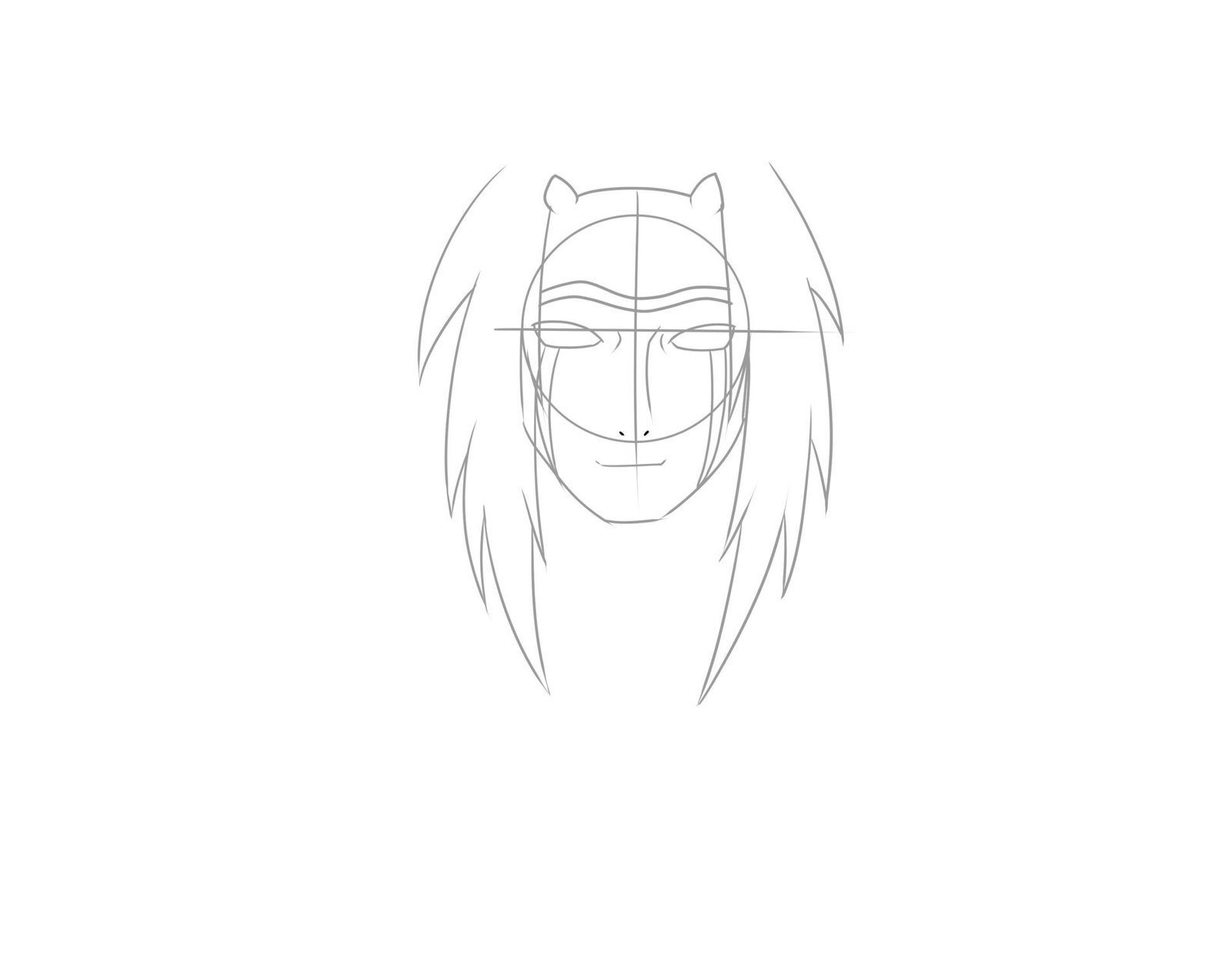 You can efficiently finish the nose by drawing the nostril.

Making a slight curve under the horizontal line of the nose so it forms the shape of the nostril; the curve should be two so that the vertical line of the head is in the middle of these curves, this is the right and left nostril because the nose has two holes.

Complete the Eyes and Eyebrow 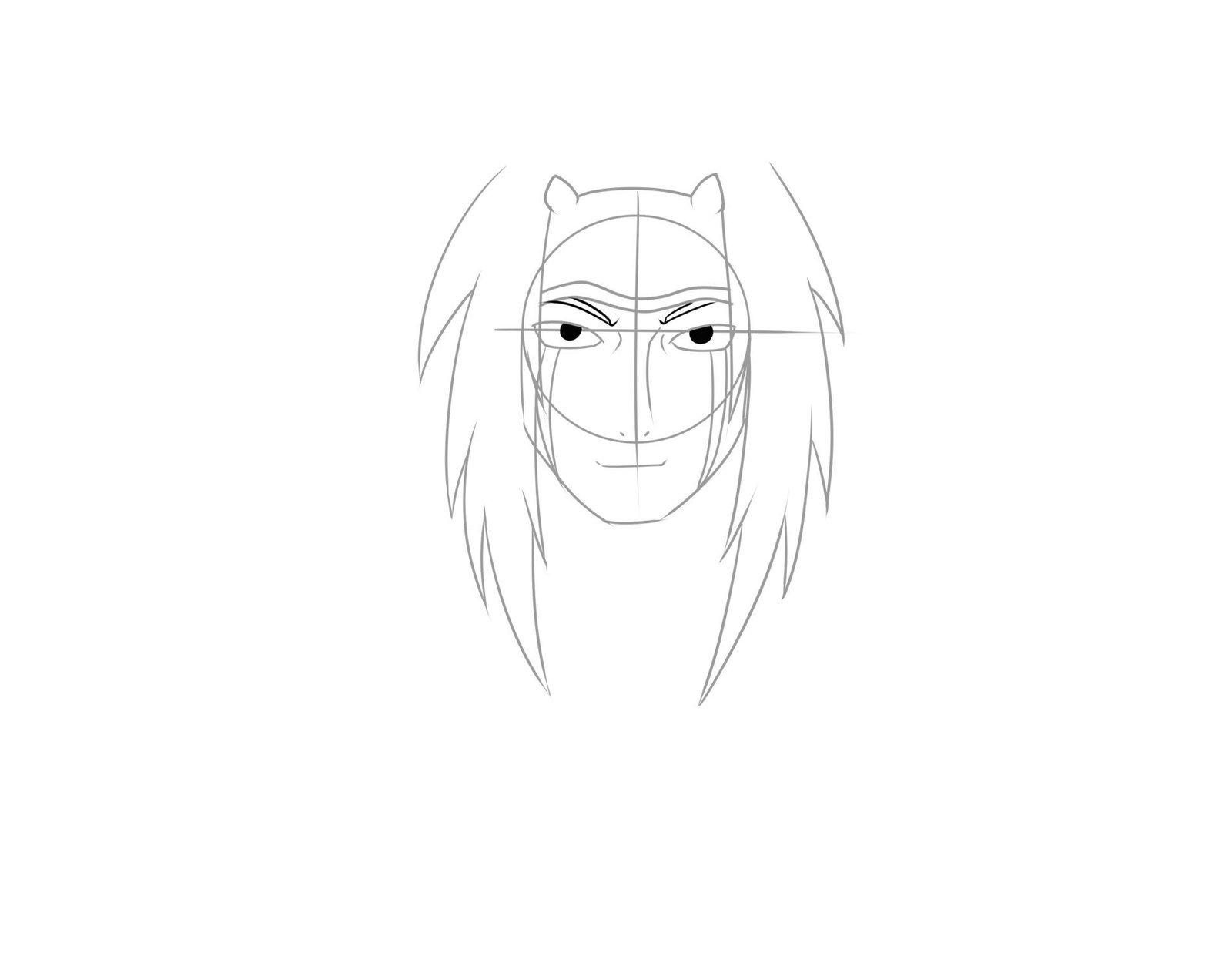 Complete the eyes by drawing a convex curve inside the eyes, this is the pupils of the eyes.

Make sure the convex curve touches the upper part of the eyes to make it look natural.

To draw the eyebrow, start with the basic by drawing a horizontal line that is curved towards the upper part of the eyes.

Making a curve from the upper end of the horizontal line, and making a zigzag shape so it forms an edge, the left edge is sharp.

In contrast, the right edge is blunt; draw a vertical slant line at the end of the zigzag, so it forms the side view of the eyebrow. 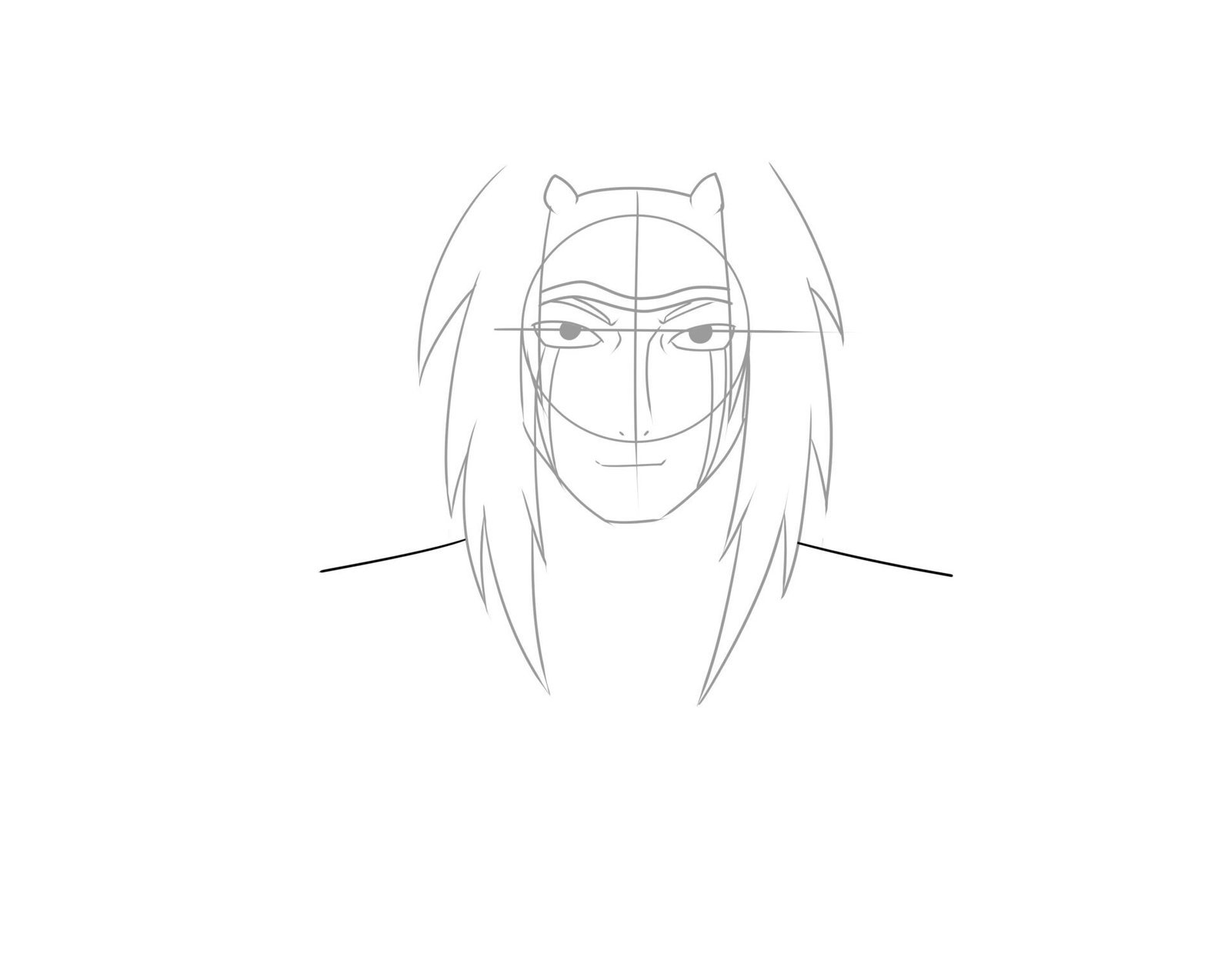 The shoulder is effortless to draw, which can be achieved by using outlines. 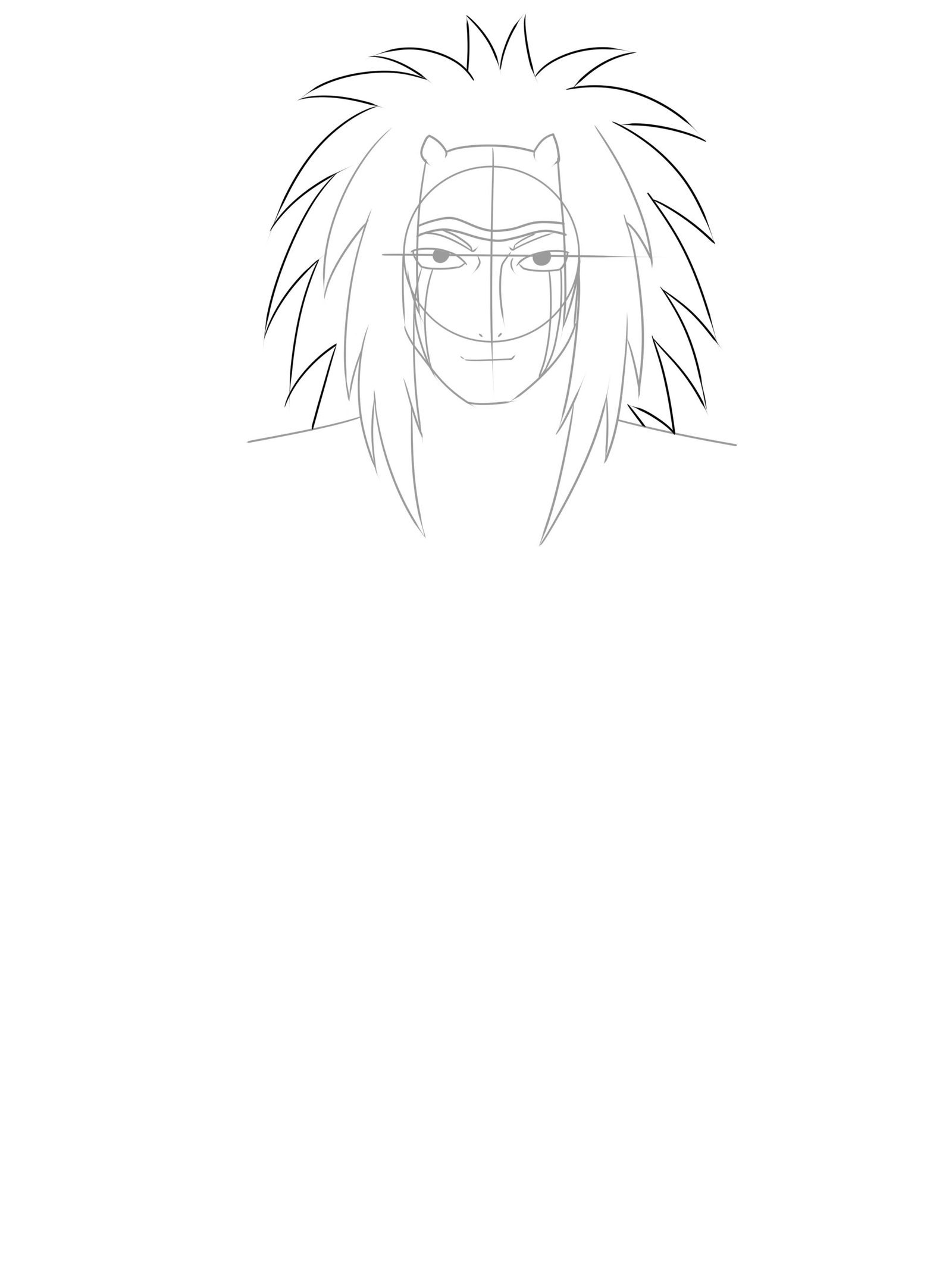 the outer border shows the real shape of the hair and it’s attached to the shoulder which tells us how long the hair is.

The space between the “V” shape and the circle of the head shows the bulk of the hair.

Continue Jiraiya’s hair by making another vertical line from the ends of the “V” shape so that it forms two edges pointing upward.

Continue adding vertical lines so it keeps creating or making edges in order for the hair to look more accurate.

The edges should look like that of thorns because the upper part of the hair faces up and the sides edges face the left and right side of the head and the other edges points downward till it gets to the horizontal line of the shoulder, this is the outer border of the hair which completes the hair.

Draw the Neck and the Neck of Jiraiya’s Cloth Draw a vertical slant line at the right side of the vertical line that runs from the jaw (which forms the hair) so that it forms the proper shape of the neck bone.

Draw another vertical slant line beside the vertical line of the hair which runs from the jaw so that it’s pointing towards the right direction, this is the line that indicates the left shape of the neck bone.

With these few approaches, you are done with the neck.

To draw the upper part of the neck of his cloth, you need to start with two convex curves that join the two vertical lines of the hair together.

While drawing the first convex curve, you need to be mindful of the sharp edge of the left hair.

Draw a small line inside the lines of the hair to finish the first convex curve and draw the second convex curve under the first one so that there is enough space between them, the space shows the wideness of the collar of the cloth and the convex curves shows that he’s putting on a round neckcloth.

Draw the pattern under the neck with lines, and make some slant vertical lines so that they form a “V” shape attached to the lower convex curve of the round neck.

Draw another inverse slant vertical line at the last lines of the “V” shape, so it forms an “X” shape towards the vertical line of the hair. You are done with the upper or neck of Jiraiya’s cloth with these few approaches.

Draw the Symbol on His Headband Now for the symbol, finish the lower part of the headband first then you can proceed to the symbol so as to have a better look at the headband.

Draw the main pattern of the symbol so it copies the Chinese character and adds three curly circles on the right-hand side of the character. This is Jiraiya’s symbol. You can add lines or erase the excess lines and dots you think are not necessary for the drawing, and add sharp curves at the end of the horizontal line of the mouth so that the two sides of the mouth can look like he is smiling.

You can make another horizontal line under the mouth so it forms the proper shape of the chin.

Use thick lines for the two borders of the hair.

Use thick lines for the border of the symbol.

Use a thick line for the facial features and tattoos.

Use thick lines for the upper part of the outfit and the border of the headband.

Add shadows and highlights to your Jiraiya drawing. Add colors to Jiraiya’s hair, the hair is white in color, the tattoo is wine in color, the pupil is black while the iris remains white, and the headband is slightly blue in color.

The lower part of the headband is wine, the top of the round neck is ash in color, while the pattern on it is slightly blue, the other part of the outfit is wine in color, you can also add a background to your drawing so it can enhance all the body of Jiraiya drawing. Drawing Jiraiya should not be as difficult as it looks; follow these few steps above, for a better and easy look, you can get a picture or image of Jiraiya, so it serves as a reference while drawing and it helps you overcome costly mistakes.

Get all the necessary equipment and materials, such as pencils, an eraser, a color pack, and the white paper or drawing book you want to use.