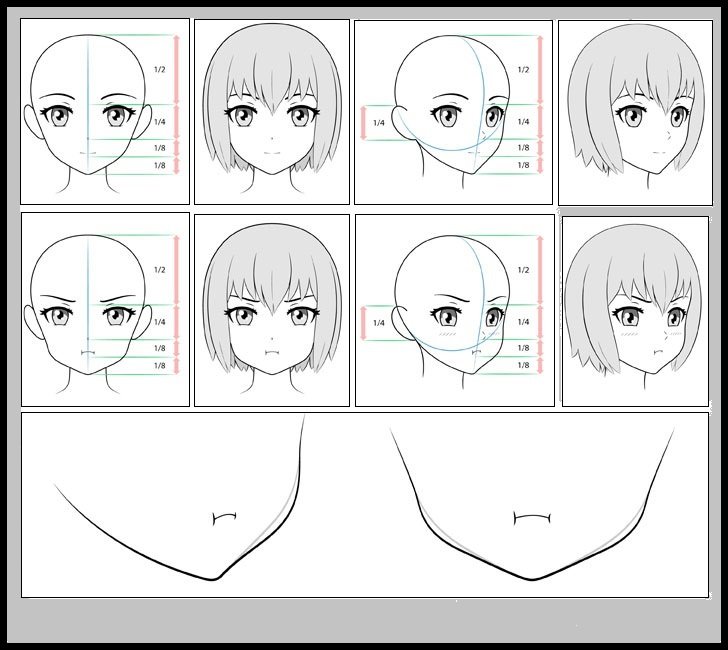 Throughout this session, we’ll go through how to draw anime or manga pouting face with puffed outward cheeks at the front and the three-quarter (3/4) perspectives 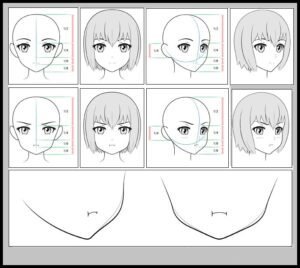 In anime and manga, a pouting face is a popular expression. However, it’s a little more challenging to depict because, unlike many other expressions, It “warps” the form of the face, rather than just the facial characteristics, with the puffed out cheeks.

Pouting faces are often painted in two views: the front view (facing the spectator directly) and the 3/4 perspective. The front perspective is usually used to depict a “ticked off” character. Still, the 3/4 view is utilized in instances where the character is additionally bashful or ashamed in addition to being “ticked off” (often looking away from the viewer).

It’s a good idea to know how a pouting anime or manga character would appear with their usual expression before painting them. This makes it easy to evaluate how much the contour of their face and facial characteristics should be adjusted. For example, the usual expression of the character used in this lesson may be seen above.

The “normal” anime/manga face sketching proportions advised in most similar lessons on AnimeOutline may be seen above.

With the puffed-out cheeks, you can see what the same character would look like.

In the illustration above, you can observe how the facial characteristics alter in a puffy face:

In the image above, the typical bottom region of the face (in the front view) is compared to the pouting one with puffed-out cheeks. 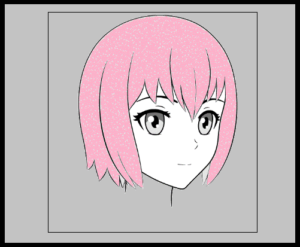 For the 3/4 view, we may first examine how the face appears with its normal expression.

In 3/4 perspective, you can observe the proportions of an anime/manga face once again. These will be the same as the front view (because it’s the same character). 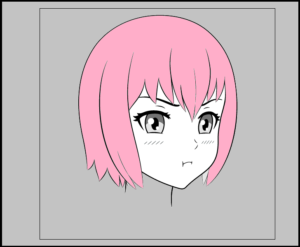 You can now see what the exact figure looks like in 3/4 perspective with a pouting face and puffed-out cheeks.

In the 3/4 perspective, draw the brows somewhat lower down with the eyes facing downwards (optionally) and slightly squinting for a pouting face. Apply a touch of blush to your cheeks and pull your lips forward, a little towards your nose. Draw an upside-down curve (opposite of normal) and two more petite curves on the sides of the mouth once more. As previously said, this expression differs from the front-facing one in that it also gives a hint of timidity to the character. Adding blush to the cheeks and pulling the eyes down further emphasizes the shy/embarrassed appearance.

In the 3/4 perspective, you can compare regular vs. puffed-out cheeks (or cheeks in this case) of an anime character.

Due to the puffed-out cheeks and the widely utilized (more challenging to draw) 3/4 perspective, pouting anime and manga style faces are slightly more challenging than other anime emotions. This tutorial should have given you a better idea of how to draw them.