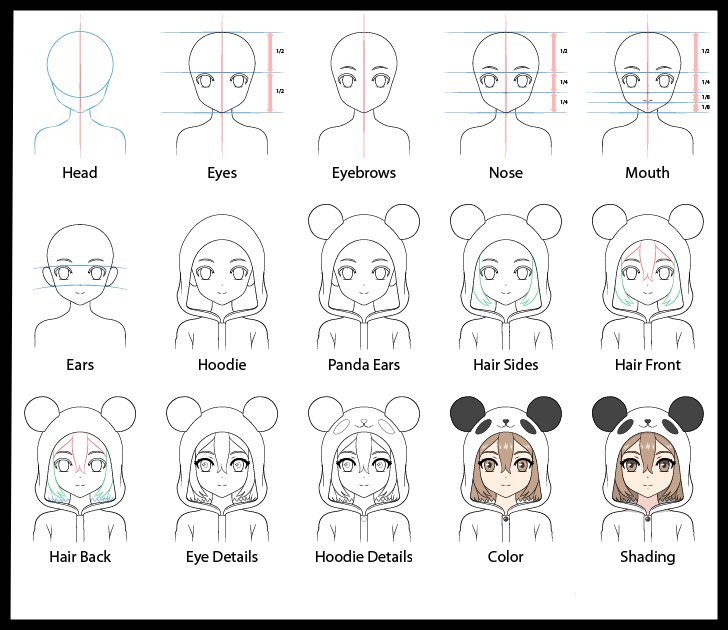 This blog illustrates step by step how to draw a kawaii character Anime Panda Girl with a panda beret and a turtle neck t-shirt.

This may take the following steps.

Initially, “panda theme” is more trending in manga and anime for years, and this anime character is wearing panda-themed clothes rather than resembling an animal inexact.

You may follow each step carefully to get a perfect anime drawing if you are new.

Or, if you are not new here, you may know the basic steps to follow to make the perfect face with the details.

Either way, stick with us and follow the lead.

Use the lightest tone of a pencil to make the outlines of the anime face.

That may help you further to highlight what part you need and erase the other to get a definite shape before finalizing your masterpiece.

Here we have used darker lines (easily visible to you) to know where to proceed and not go in a maze thinking where to start. 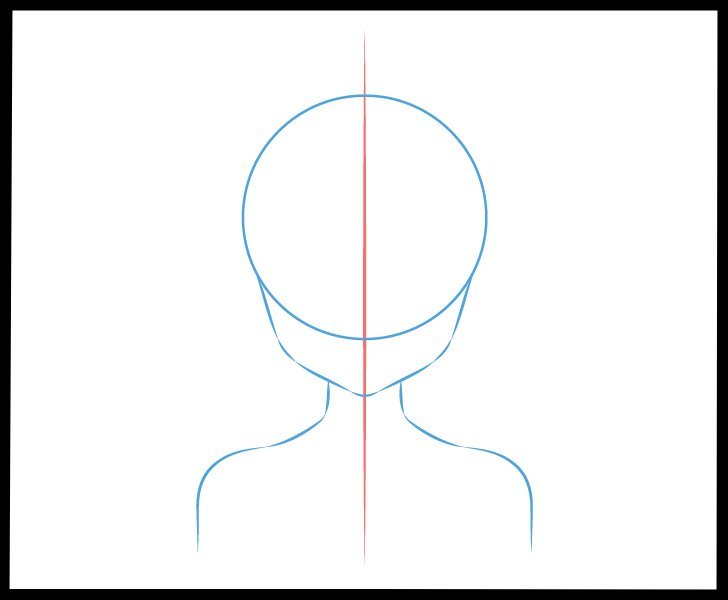 First, make a vertical line to divide the page into two halves.

We are about to make the frontal view of the anime. Do leave enough space so that we can adjust a hat on the top left of our character’s head.

Draw a big circle, i.e., for the head of the anime.

Then, we will draw the lower part of the face locating the jaws and chin to finish the head section. (See the sample picture to clear any doubts)

Now, make a thin neck with small shoulders so that the character looks more kawaii. Clear instructions for the lower area of the face: Further, divide the full face in half horizontally and just below the horizontal line draw eyes for the anime. (Make sure you leave enough space in between both the eyes that an eye can be placed in between.)

Eyes should be larger than normal eyes. I will give the finite details later on.

As for now, our motive is to fairly place the facial features. 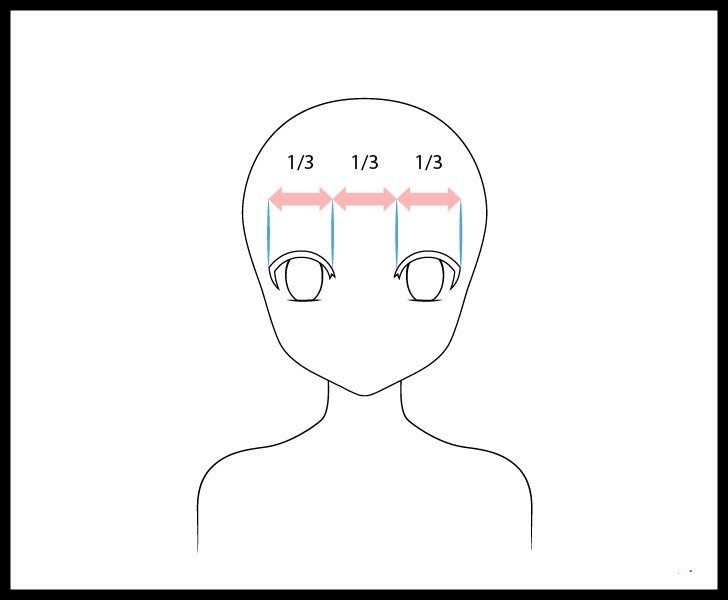 Half an inch above the eyelids, we will draw two pairs of eyebrows. This time the eyebrows should be a bit smaller than the eyes. Half of an inch below the eyes, on the vertical line towards the center, draw a line or a dot to represent the nose. 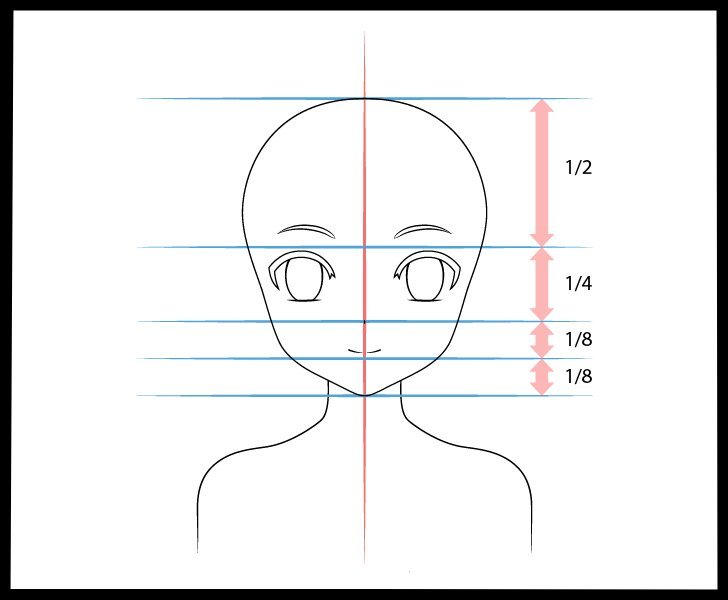 Measure an inch below the nose dot/ line draw a simple mouth opening. (Upper lip is not nearly drawn in anime characters.)

It should be 1.5 inches above the chin.

Make a wider without edges boat shape for a smile, or a pout, make a circular wider ‘w’ shape. 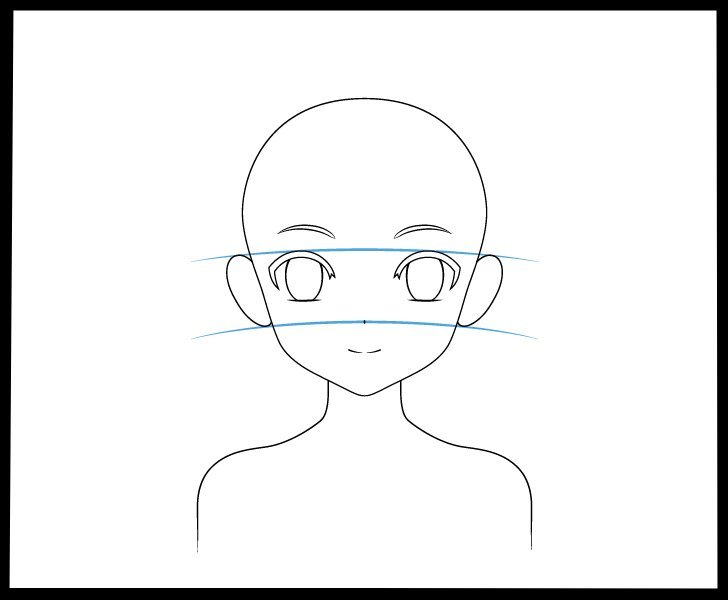 For ears placement, we will start marking with the upper part of the eyes extending the upward curve downwards till the placement of the nose.

In anime, ears are basically by the hairstyle or mostly because of accessories.

To make a distinct hairstyle, the picture is placed for the referring, making it easy for you to follow up.

Anime hair is human-like but is drawn in bunches of strands together with layers of detailing. Hair detailing in steps:

At the beginning of this blog, we mentioned clearly that ‘panda-girl’ is a girl in a panda-themed dress. (Berets are too cute to handle and are worn in anime and manga as fashion statements or part of the uniform.)

So, here we will position the panda ear beret on the top left side of the kawaii anime head.

We will begin withdrawing a hairline to place the fluffy beret as we have decided.

We can leave the hair volume uncompressed, as shown in the figure.

Usually, berets are fluffy, so we will draw the upper area of the beret with the panda ears sticking out of it while maintaining a fair distance away from the head. (Can make the upper part curvy too, may add little fluff.)

Afterward, I will add a thin/broad strip around the top left head halfway.

Draw one side in a folded position(left side) from the lower part of the beret, making it hang on the left side, as it appears that the hanging part covers the strip. (Reference picture would clear all the details above, so give it a look.)

Add highlights and detailing to the hair to make the beret stand out.

Beginning by giving a slight outline to the eyelids, we can make little curves that should be inclined towards the nose, barely above the eyelashes and closer to the outer sides of the eyes.

To enhance the eyelashes, we will start making some upward strokes and coloring them in black to give them a popping look. 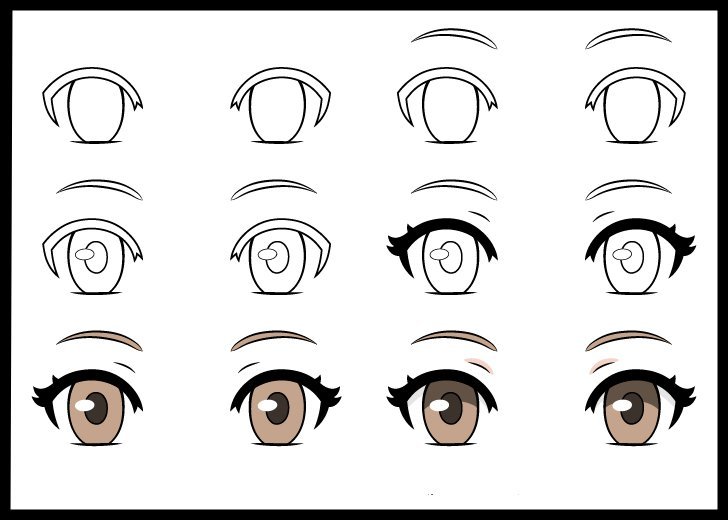 (Illustration) The illustration above could be considered for reference, such as how to shade, add variations, and highlight what part to make the eyes look more attractive. As it will guide you in steps. (Illustrations)

To make it a fluffy woolen turtle neck t-shirt, we have to make the neck part like a broad packed up scrunchie.

We are giving it nice curves on the upper and lower part of the neck area.

Adding Details To The Beret:

At the topmost part of the beret, add panda ears, so we will make two semicircles elongate them enough, so they appear to be connected to the beret.

Now, for the eyes of the panda, we will make full wider circles on each side of the beret just below each ear.

In those full circles will add a medium-sized pupil in each of them, then a smaller pair of irises, and on the irises to give a lustrous look, we will make little white dots so they may appear as they are shiny.

Now noticing the central part of the panda face, between and below those circular eye patches, we will add an inverted triangle shape for the nose of the panda. (Check the illustration above for reference.) As we all know, pandas are in neutral colors; we will need just two colors to give life to the beret.

Furthermore, we will add color to the eyes, hair, face, and turtle neck t-shirt. Firstly, we should suppose the light source somewhere above the head of the character.

So, it clarifies the shadow formation and will help cast a shadow on the final piece.

Here, the character is in a room with proper lighting or is present outdoors, so the light source is directly above her head. 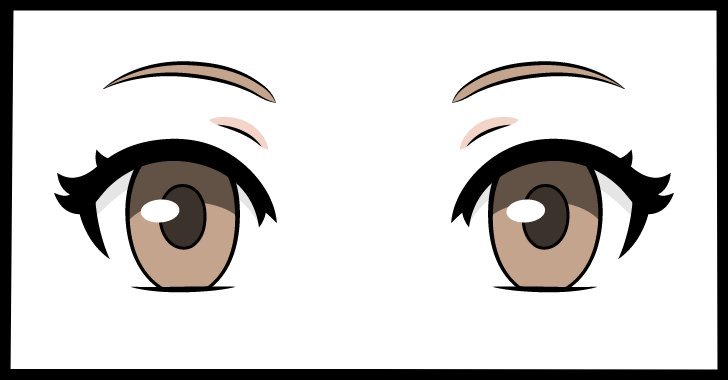 To make the eyes less dull and to avoid the staring effect. Will shade the irises of our kawaii panda girl. Now, applying shade to indicate the shadow casting of the light source is as follows:

In the above blog, the character has given a ‘panda look’ by her costume and accessories. Not by giving her exact features like an animal.

If you desire to produce any other animal-themed costume for your character, you can take into account the steps given above but have the details of the animal accordingly.

Then you may add them to the t-shirt and the beret of the character.

Such accessories (especially animal-themed ones) are surely used in anime and manga.

I hope you found this blog helpful enough to draw your own ‘kawaii panda-themed anime.

For more fancy anime characters, tap the given links below:

How to Draw Anime Hand Poses