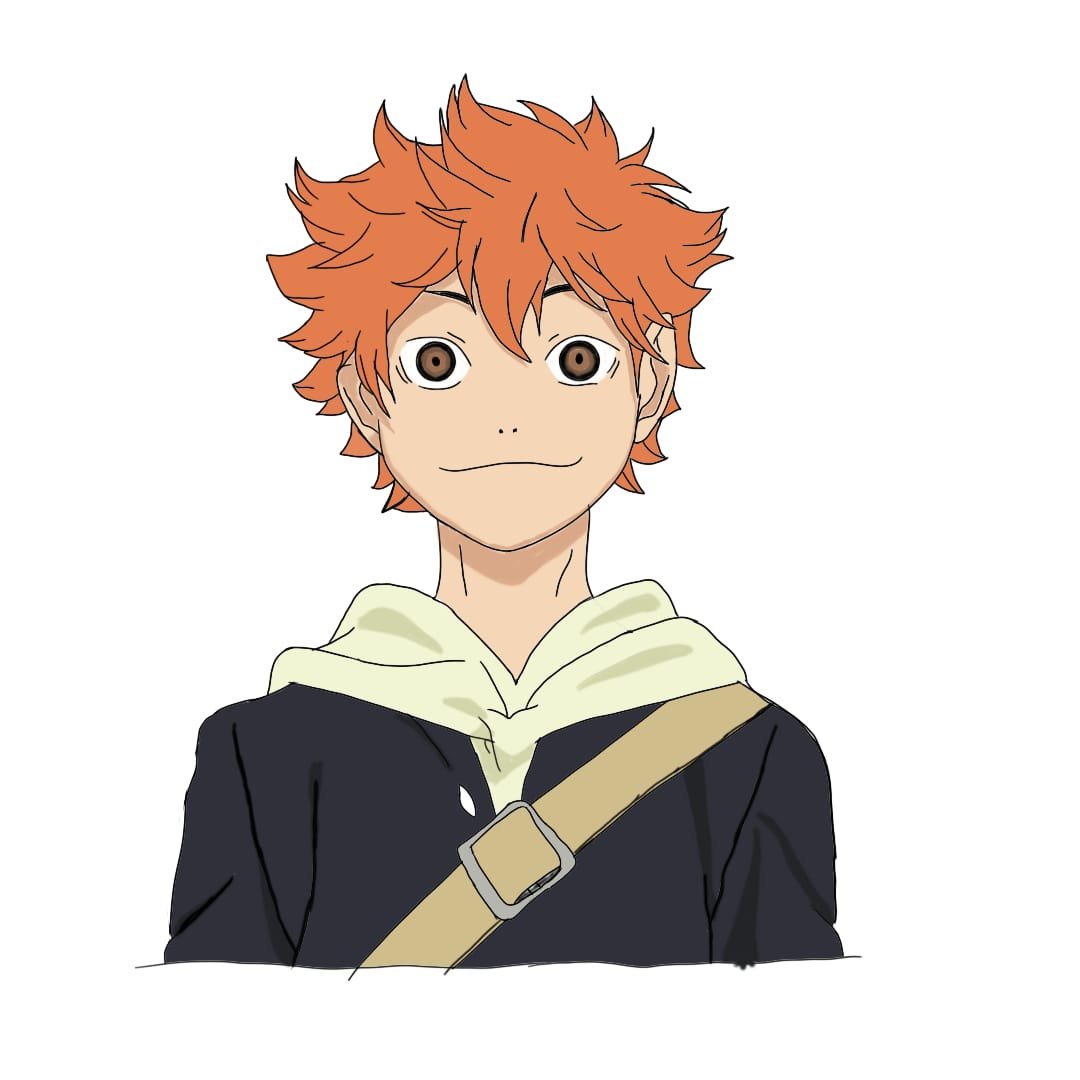 Drawing Hinata Shoyo isn’t difficult at all if you know where to search and look for reference material.

Hinata is one of the protagonists of Haikyuu.

Many people love his personality and capabilities, making him a good captain.

To draw Hinata Haikyuu, you can use a ballpoint pen to draw, or you can use an airbrush for a great result in your art.

If you are not familiar with Haikyuu, you can find all the information on the internet, but I am sure that we all know the concept of Haikyuu.

We’ll draw Hinata Shoyo drawing with a big eye & beautiful hair on his head, and he loves carrying a cross bag with him, so it matches his outfit.

Now here’s a how-to guide on Hinata Shoyo drawing in a few steps;

This is the first step in Hinata Shoyo drawing; draw a very big circle so that it shows the size of his head. This circle is the head.

Make a vertical line inside the circle which should be at the center of the circle; this will help in the alignment of the facial features and other parts of the head.

Make a horizontal line inside the circle of the head; this is for the eye, make sure the vertical line of the circle is extended so that the jaw can be easily fixed.

Make a little horizontal line on the extended vertical line of the head, this is the basis of the jaw. 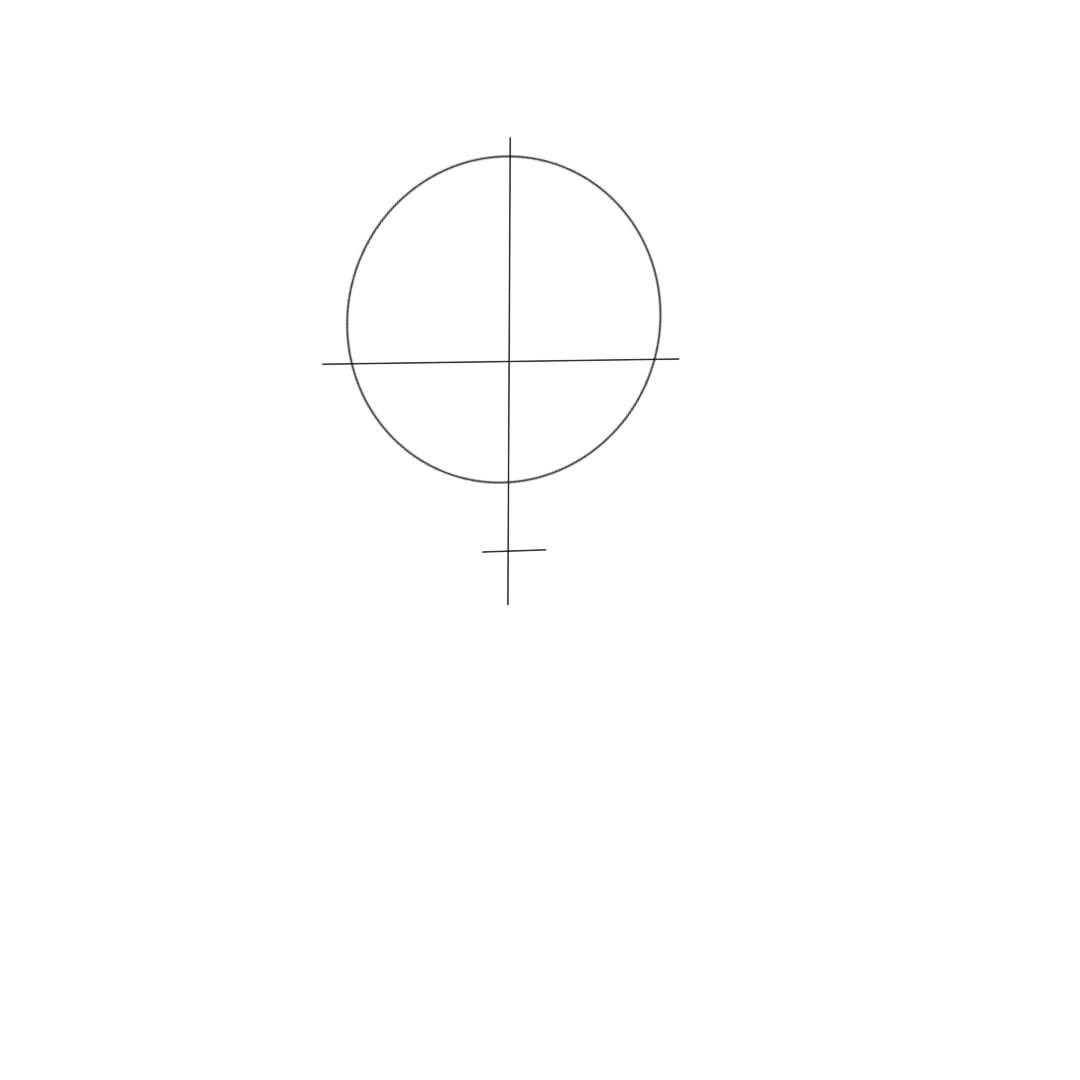 Hinata Haikyuu has two wide or big eyes, which complements his big size head; you know it would be weirder if he had big eyes and a small head or vice versa.

At this point, make a curve (so it looks more or less like a concave curve) on the horizontal line of the eyes while the vertical line of the head shows the boundary between the eyes; this is the upper eyelid;

make a horizontal line that is slightly curved under these curves of the eyes, this is the lower eyelid.

With these approaches, you’ve successfully drawn the basis of the eyes.

Hinata has a very funny and amazing nose.

Even though the fullest part of his nose is not visible, we have the nostril, which makes it more unique than he has a nose, so let’s draw the nostril and make two dots under the eyes, so the vertical line of the head shows the boundary between the two dots of the nostril, this is Hinata’s nose.

Drawing Hinata Shoyo jaw is quite different from the way you draw the jaw of another anime character because of the shape of his head; you might need to make the jaw under the circle of the head.

Make curves from the sides of the circle of the head, so it forms a convex curve.

At the same time, it joins at the center of the horizontal line you drew for the basis of the nose; the vertical line of the head, which was extended downward, should divide the jaw into two equal parts to make the shape of the head a better one. 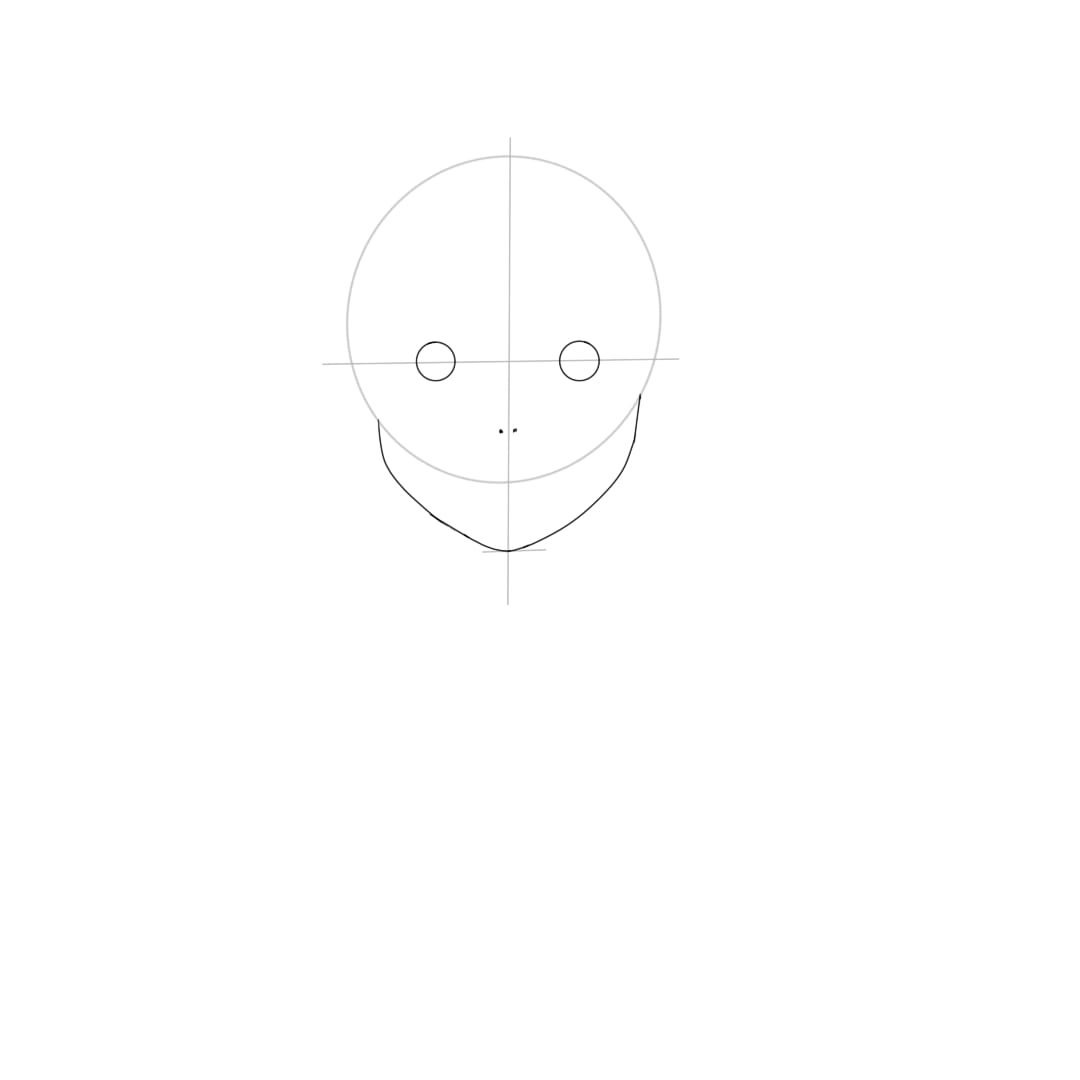 Begin To Draw His Eyes, Hair, and Mouth

This time, you will need to continue to draw the eyes from where you stopped basically; since you have the upper and lower eyelid of the sights already fixed.

The other parts of the eyes shouldn’t be too difficult.

Make circles in-between the eyelids so that the horizontal line which you drew for the basics of the eyes is seen in the middle of these circles, this is the iris of Hinata eyes.

To draw the hair, you have to start from somewhere; I know seeing the hair might look difficult, but truth be told, nothing is unachievable if you can start with a step, draw the hair that is on Hinata’s forehead.

Make a curve on the forehead so that the curve touches the horizontal line of the eyes.

At the same time, it points toward Hinata’s left eyes, making another curve from the vertical line of the head to the end of the first curve, so it forms an edge; that is for the hair on the forehead.

The mouth is another amazing part of Hinata’s body.

The neck and shoulder are connected and attached to the curves that form the jaw, making vertically curved lines from the curves of the jaw downward, forming the shape of the neck.

For the shoulder, elongate the curved part of the neck down, so it creates horizontally slant lines; these are Hinata’s shoulders because he has left and right shoulders which balance the shape of Hinata’s body.

You can as well extend the horizontally slant line of the shoulder to form a vertical line which is part of the upper part of the cloth.

Now that you are done with the neck and shoulders, you can confidently move to the next step. 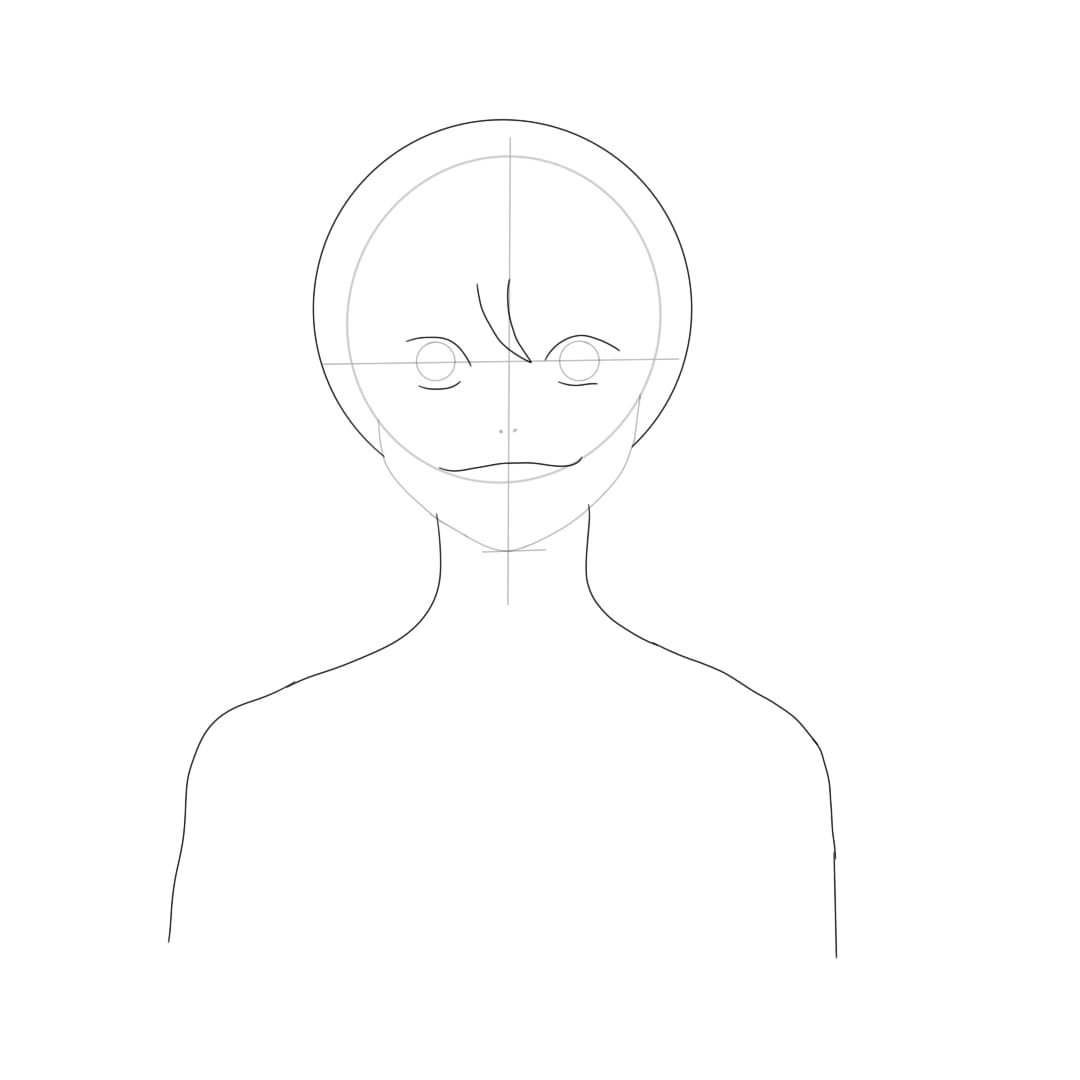 Complete the Drawing of Hinata’s Eyes and Eyebrows

Draw the eyebrows, this is another part of Hinata Haikyuu’s body that curves can easily replicate.

Make curves on the upper eyelid of the eyes so that it touches the horizontal line of the eyes, these are his eyebrows.

Curved lines are the basics you need to draw the hair.

Draw a curve at the top side of the right hair.

Make a horizontal line under it so it forms an edge, and draw a curved vertical line at the top of his right eye close to the hair at the forehead.

Make curves from the horizontal line of the eyes that exceeded out to the side of the jaw.

Make a curved line from the horizontal line of the eyes and draw a vertical line joining to the curved line, so it forms an edge at the right side of the right eyes.

Make another edge at the right side of Hinata’s head, but this time the edge should be pointing outward.

Draw the Neckline of Hinata’s Cloth

Hinata is putting on a “V” neck cloth so that the shape of the neck became more real and obvious.

Draw a horizontally bent line from the right and left side of the shoulder so that these lines also form another sharp edge (but not as sharp as that of the “V” shape) under the “V” neck.

You can extend the horizontal line of the left side out of the joint a bit.

Draw a small curved horizontal line under the “V” shape of the neck.

Draw two lines to the little horizontally curved line under the “V” neck. This is the neckline of his cloth.

Draw the Strap of Hinata’s Backpack

Drawing the strap is also another very fun part of Hinata Shoyo drawing.

The strap makes his outfit look more attractive and detailed.

Draw a vertically slant line from the left side of Hinata’s shoulder down to the lower part of the cloth, so it seems to be close to the center of the cloth.

Draw another vertical slant line from the curved line that forms the neckline of the cloth downward towards the right-hand side of the cloth.

Complete the strap of his backpack by adding a square shape that bends towards the direction of the vertical slant lines; this square shape should be inside the lines even though it might exceed above it a little so that the square shape seems to be at the center of the cloth.

Draw another square shape inside the first square so that it forms the proper formation of the buckle of his bag strap. This is the strap of his backpack. 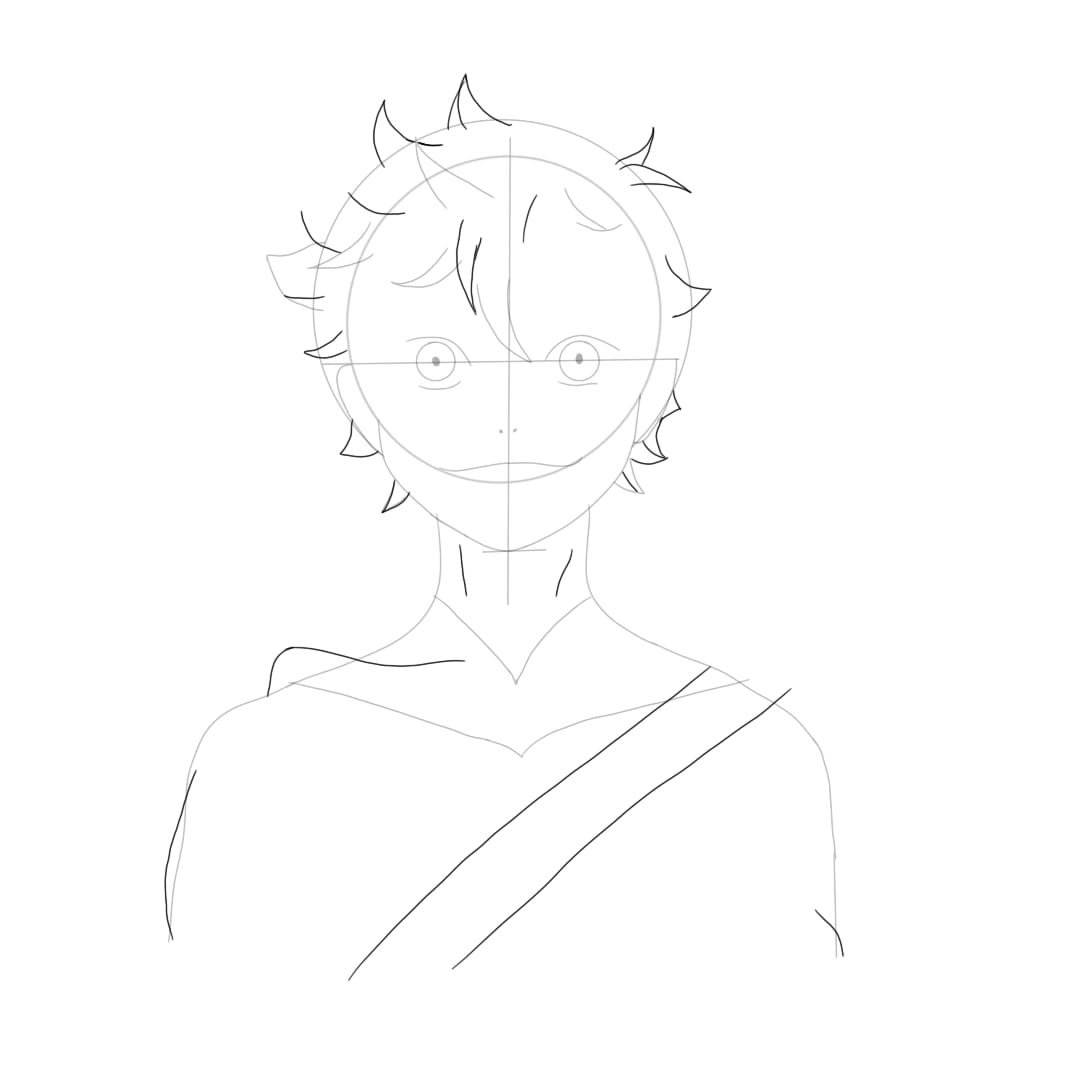 At this point, it is very important that we need to make sure the outfit looks real and natural by adding curves and lines to the already started cloth.

Draw lines joining the horizontally curved line of the neckline to the square shape of the strap so that the front part of the outfit can look more enhanced and attractive.

Make a vertical slant line under the lower part of his right shoulder to the direction of his strap.

Add a vertical line so it joins the vertically slant line from the right side of the shoulder, this makes the right arm of the cloth.

Add a slant line and an oval shape so it looks like the rope of the cloth. This is Hinata’s outfit. 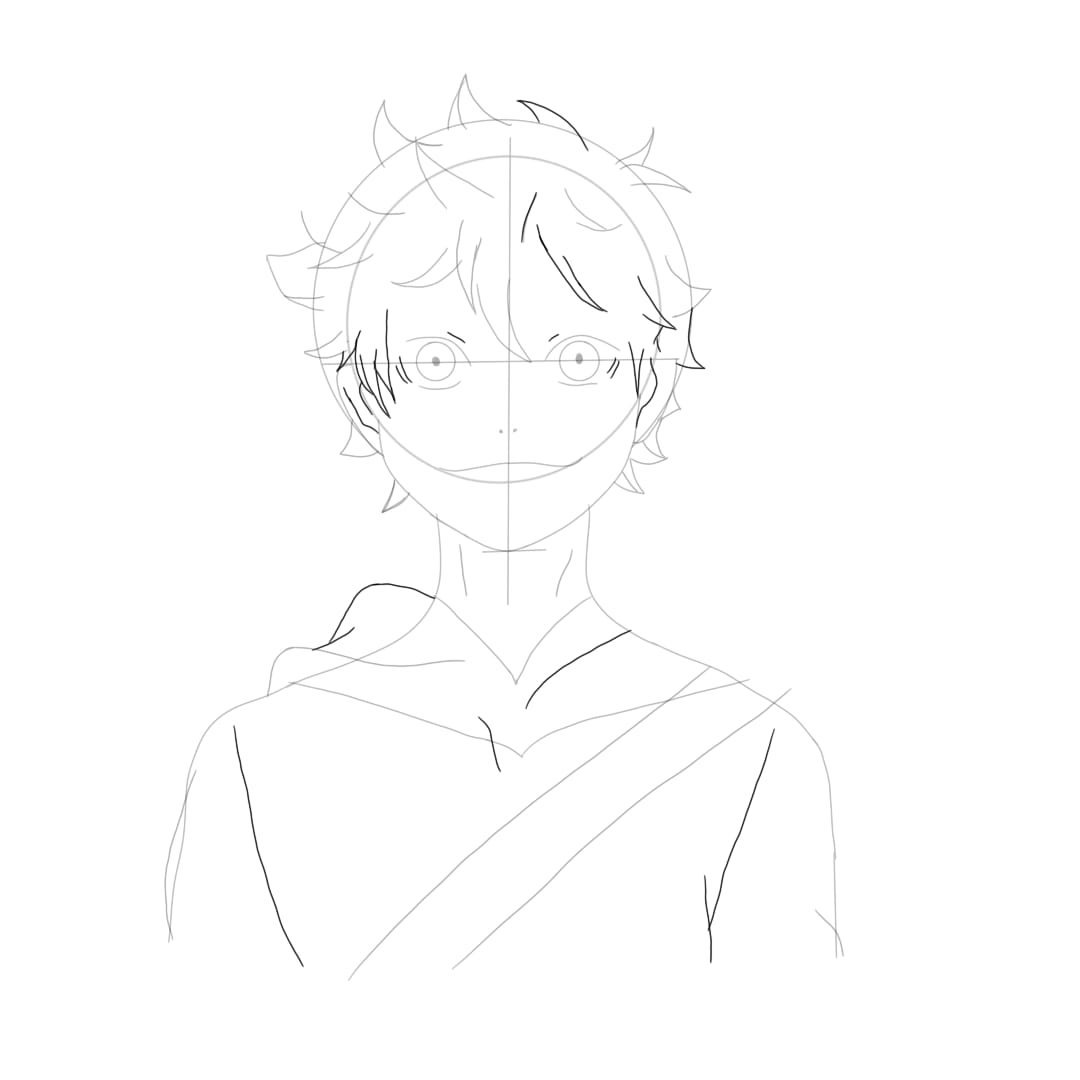 This step is to finish the shape of the hair by adding more curves and lines to make edges.

Make edges facing up, and make edges at the left and right sides of the curve of the hair.

Create a slant line at the right top of Hinata’s head and hair.

Make more edges on the head and be careful so that it doesn’t exceed the horizontal line of the eyes, this is the edges at the forehead.

Make a curve at the right side of Hinata’s right eye, add a vertical line closer to his right eye and join a little line to it, so it forms an edge. 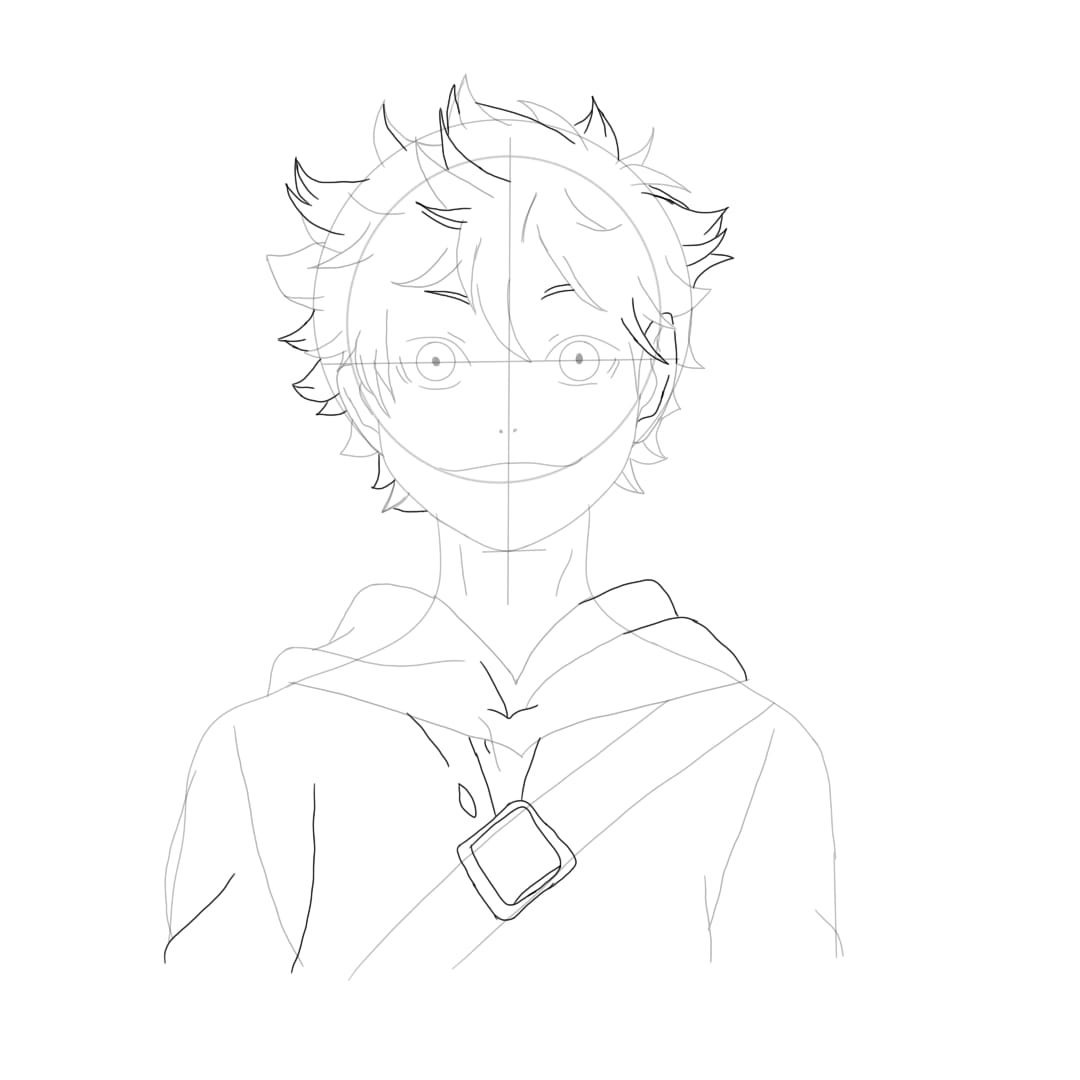 Enhancement here means all the necessary addition and subtraction you can do to your drawings to make them good-looking.

Use a thick line for the square of the strap and use a sky blue color for the space between these squares.

Use the same color for the remaining part of the strap, add shadow and highlighting to the outfit, and always remember that the appearance of the outfit will determine how your drawing will look. 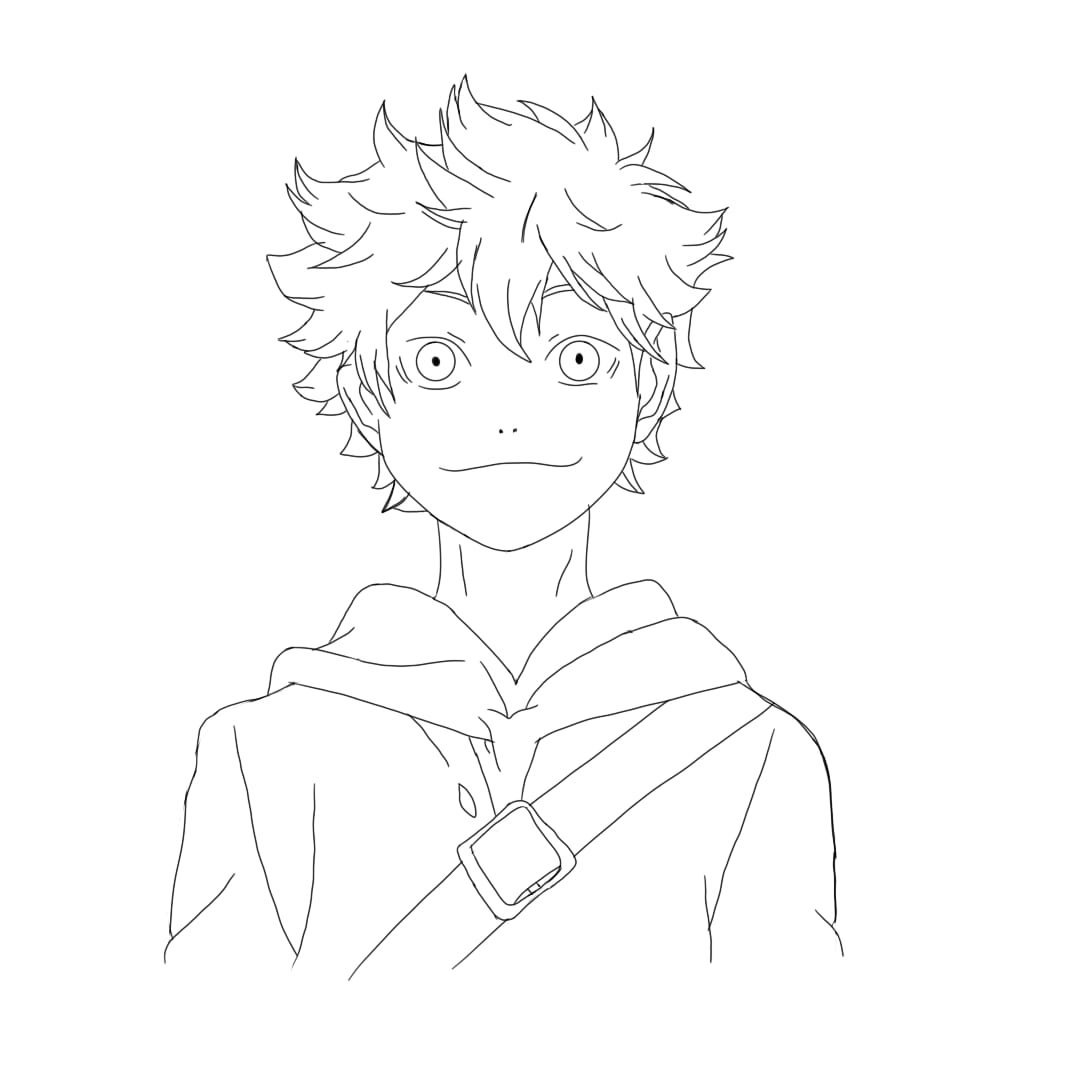 Add additional lines and dots to the outlines, add a curve at the sides of the circle of the head, make curved lines inside the turns so it forms the proper shape of Hinata’s ears, and erase all the excess lines and dots of the outline.

Use a very thick pencil to draw the border of the eyes and shade the small circle of the pupil.

Draw a small curve inside the pupil of the eyes, so it forms the natural shape of the pupil and uses a thick line for the upper part of the eyes, using the appropriate colors that suit the outlines.

Use the right color for the hair, so it looks kind of deep orange.

Makes lines with a light pencil above the nose, adds lines at the neck, so it makes it look realistic, the pupil is slightly brown while the iris remains white, add shadow and highlighting to the outlines, so it makes it perfect. 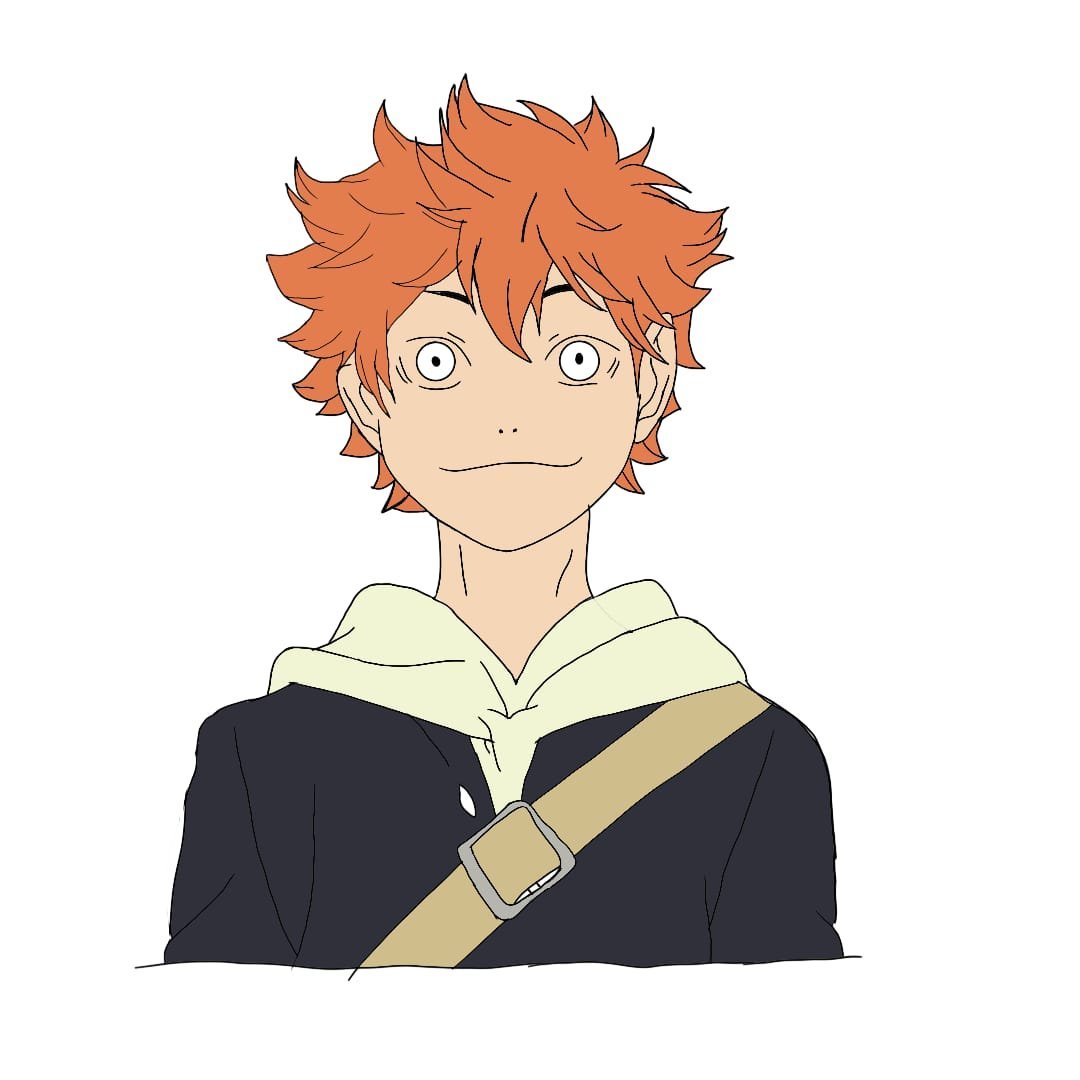 Hinata Shoyo drawing might seem hard because of the full details of his hair, but with these few steps above, you can easily draw Hinata without an error.

For beginners, make sure you have an image of him for reference so that you can follow alongside with these steps you can successfully draw Hinata without any help.