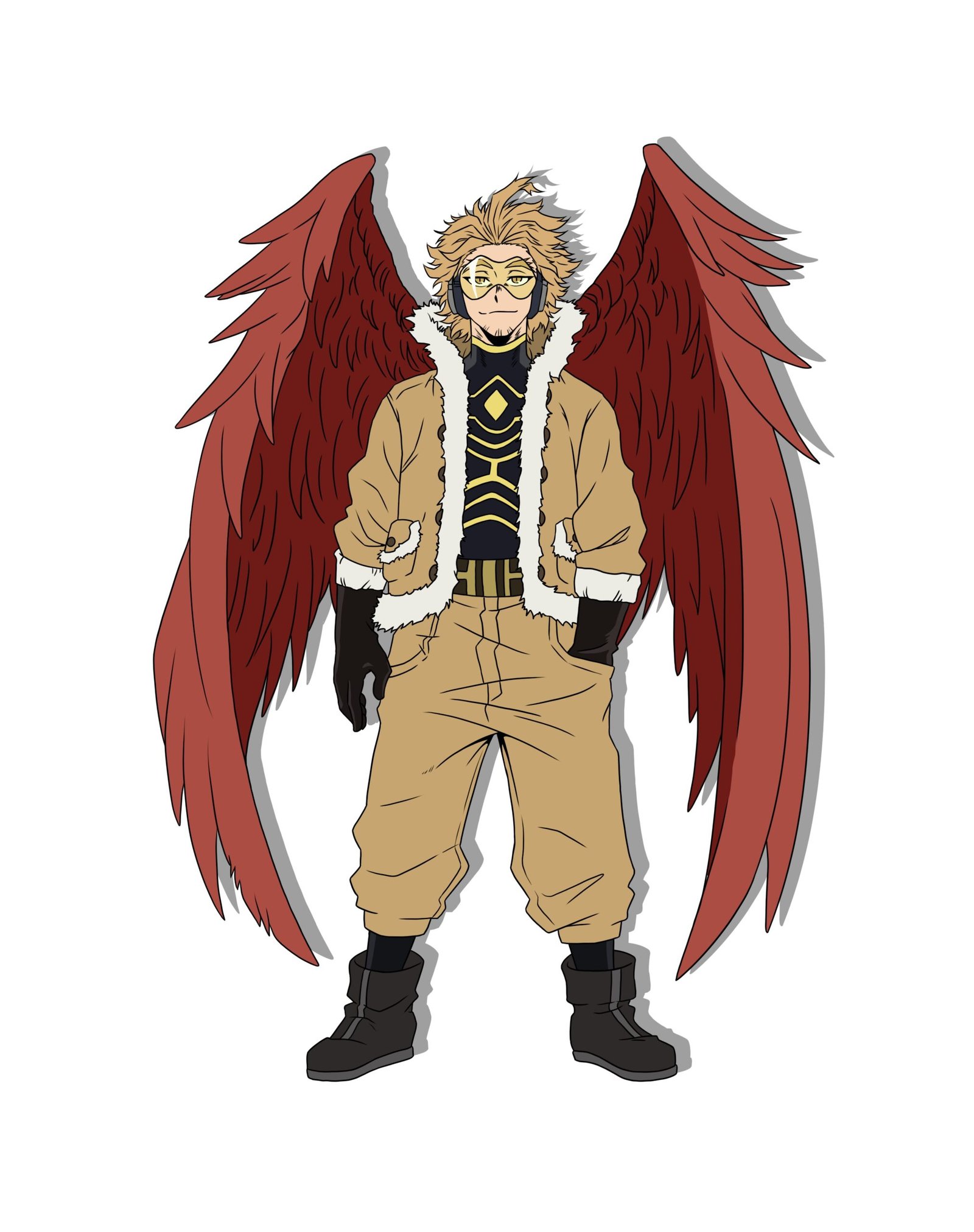 Hawks- Keigo Takami is Pro Hero despite his young age. Let’s get started with the Hawks Drawing without further ado.

He has been working with heroes since he was seven years old, but it wasn’t until he became an adult that he decided to become a professional hero himself.

After becoming a pro hero at nineteen. Keigo had a meteoric rise through the ranks and was soon called “The Next Big Thing.”

It didn’t take long before Keigo began to be recognized as one of the best new talents in the industry.

How to draw Hawks (Step-By-Step Guide)

The pose is simply the way the hawks stand.

We have to draw a circle that serves as the head.

The circle should not be too big but the size of a normal head.

This vertical line should be very long (the length of the hawk), then you draw another horizontal line at the bottom of the line, which would serve as where the hawks are standing. This line should be a bit longer than the legs can fit. Begin with a circle and lines

The circle serves as the head.

The mouth should be wider than the nose when drawing the nose. Outline the arms and hands

The arm should be drawn like a human’s arm, the elbow should be bent, and the left hand should be inside his pocket.

Keigo has two hands, and the fingers should fit well in the hand.

Both right and left hands are respectively equal.

The knuckles should be pointed downwards.

The left hand is inside the pocket, while Keigo’s right hand is beside the right pocket. Keigo has two legs. The leg should be drawn like a human’s leg. The legs are drawn with a space between them.

Keigo’s leg hosts many features found on his body, like his pant, boot, ankle, knee, and many more.

You can easily draw the legs by starting with two vertical lines attached to the semi-circle (convex) that serves as the stomach and waist. The boot should have three parts, the front part, the back part, and the heel.

The front part should be narrower than the back part.

The back part should be narrower than the heel.

The toe should point towards the ground, the sole.

You can easily draw the boot by drawing a vertical line beside the lines of the legs, then draw a semi-circle(concave) at the top of the vertical lines.

Now draw another semi-circle pointing outward, and let the edge of the two semi-circles meet. You can now close the opening with a vertical line. Hawk has two wings, the left-wing and the right-wing.

The wing should be drawn like a bird’s wing. Hawk’s neck is drawn with two vertical lines connected to the head and shoulder.

The necklines start from the bottom of the ear and end on the concave, which serves as the shoulder.

The neck should be thick.

The neck should not be too thin or too fat.

The neck should be connected to the head through the shoulders.

The jaw should be wide.

Keigo’s jaw can easily be drawn by connecting the two vertical lines that serve as the neck with a semi-circle (convex) joining with the circle of the head. The jaw should be connected to the neck. The earphone can be drawn by making a bigger curve on the ear.

The earphone is also connected to the glasses he’s putting on. Draw the eyes and eyebrows

To draw the eyes, you have to draw the shape of the eye, then add the eyelids, the pupils, the iris, the whites, the black, the lashes, and the brows.

The eyes are also connected to the glasses.

The iris is at the center of the eyes, while the white part of the eyes is showing at the bottom of the iris

To draw the eyebrow, make two concave shapes on top of the eyes. The lower concave should not be too curved inward so the eyebrow can look more realistic. The nose is placed between the eyes.

The nose should be placed slightly beside the middle line of the face. The nose is also connected to the glasses, and it is above the mouth. The mouth should be wide.

The mouth is drawn from the horizontal line of the circle of the head.

The mouth should be placed on the vertical line that runs from the top head to the down part of the body. The mouth is a single line because it is closed. The hair should be long enough to cover the entire head area.

The hair length depends on how much hair you want to draw.

The hair is very simple to draw. You just need to pay good attention to how it looks to make something good out of it. To draw Keigo’s shirt, he is putting on a turtle neck.

The turtle neck has some designs on it.

His shirt is black. A hood is attached to the coat.

The coat comprises three parts, the right part, the left part, and the sleeve part.

Double the semi-circle but make sure it is not too close or wide.

Know that the semi-circle starts from the hair and ends by the side of the hand (close to his wrist).

Beside the semi-circle, draw a vertical line coming from the shoulder.

At the bottom of the straight line, draw a curve facing downward and divide the curve into two separate lines.

At the bottom of the line, draw another curve facing the first curve (the curve should face up).

This part serves as the Keigo’s pocket. This is for the right part of the hood(jacket).

Now repeat this same technique for the left part. Then add fur to the tip of his coat and the hood. To draw Keigo’s gloves, the gloves are made up of four parts, the thumb, the index finger, the middle finger, and the ring finger.

The thumb is placed on the palm. To draw Keiogo’s pants, the pant is divided into 3 parts: the top, bottom, and thigh parts.

The top part is placed on the waistline. To draw the belt, connect the two curved you drew for the jacket with two separate horizontal lines.

Make sure the lines are not too close to look like the belt.

The leg host the pant and the boot.

After you’ve drawn your pant, all you need to do is draw a vertical line at the bottom of the pant.

At the bottom of this little straight line, draw a slightly curved horizontal line to close the leg. Keigo has two wings which are left-wing and right-wing.

These wings are respectively even and symmetrical.

The wings look exactly like that of a hawk.

This is the top of the wings.

Draw a vertical line bending each side from the top of the wing, repeat the lines in several places, close the tips of each line so it makes an edge each, draw a bigger curve that reaches the top of the boots pointing inwardly, make an edge for the curves too, keep repeating the edges from the longer curves towards the hand. To enhance the outfit, add your colors and other features of the outfit, or maybe fix other missing parts you might have skipped while replicating the outfits.

The inner cloth (turtle neck) is black with some designs.

The jacket and the pant are of the same color, the boot is black, the glove is black, and the tips of the hood is white. This means other body parts that need enhancement like the eyes, the earphone, the glasses, the hair, the face, and many more.

The glasses are gold in color, the earphone is black, the iris of the eyes are black, and the hair matches the outfits.

Keigo is fair in complexion. The wings are the same color but different from his outfits and complexion. Now you can draw Keigo from “My Hero Academia” without any problem; all you need to do is get all your necessary materials ready, and with these few steps, you can easily draw Keigo.

Know that drawing is not easy if you don’t practice enough.

Therefore, try to draw every day.