In this article, you’ll learn how to draw Guts to understand what makes this character tick and how he fights and looks. So let’s get started with the Guts Drawing.

How to draw Guts is one of the most difficult drawings globally, especially if you want to draw something that represents BERSERK!

The reason is that BERSERK is a deep, dark and violent realm where nothing is ever as it seems. Only the brave and the strong survive in this world of demons and monsters.

How to Draw Guts Berserk Step By Step

To draw Guts standing, draw an oval to represent his head.

Then draw a line running through the oval for the neck and shoulders.

His body is drawn as a rectangle.

A short vertical line is drawn below the rectangle forming the body to represent his waist.

Then draw an oval joining this short vertical line, which should represent his groin. 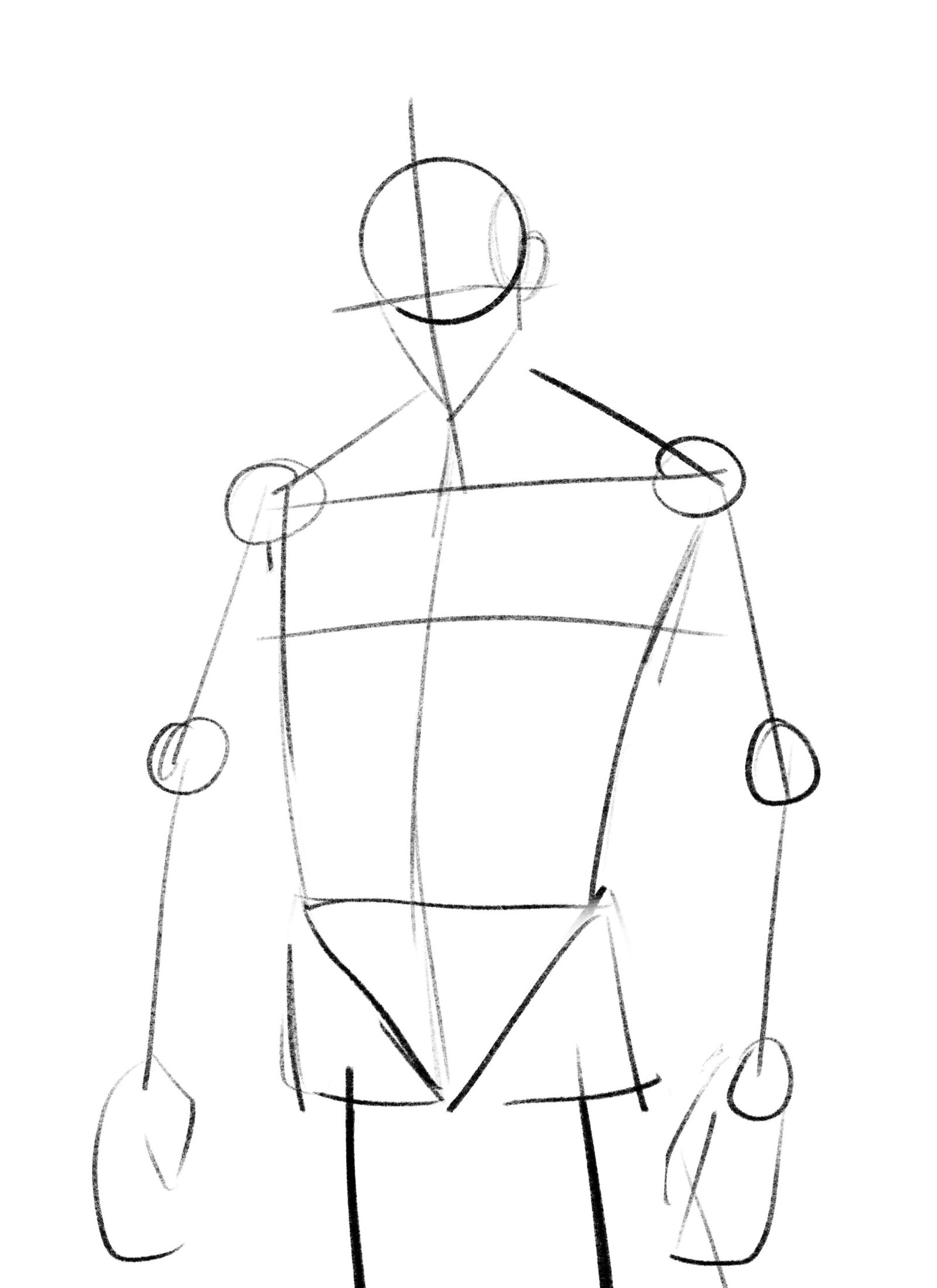 Start by outlining his jaw, chin, and the top of his head.

Then draw the nose and the eyes. Just resent them with lines at this stage. To draw the arms of Guts Berserk armour, draw one of the arms with 2 lines running over the outline representing his arm and hand. 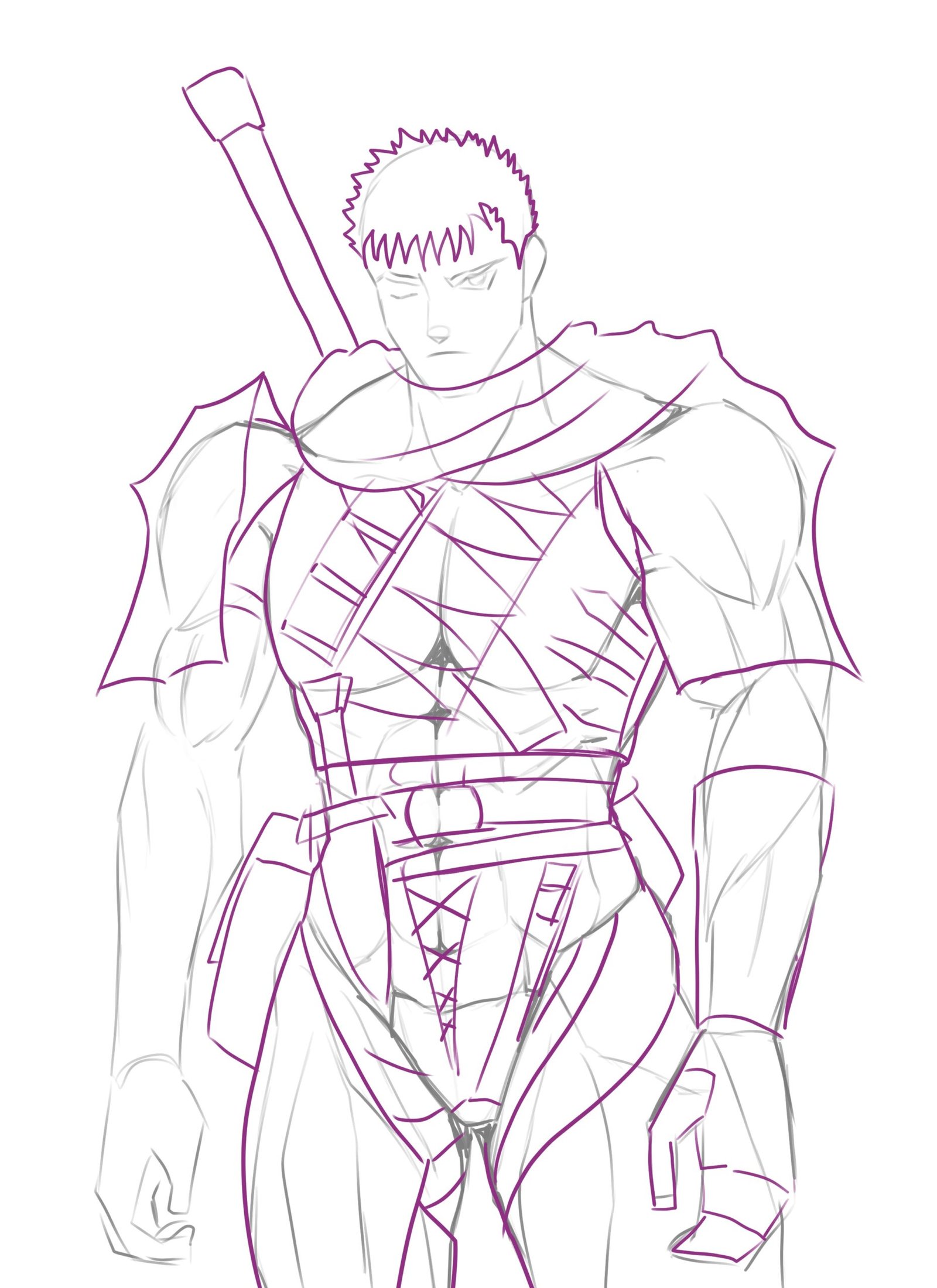 Draw the shoulder of the armour

Draw a slightly bent line that looks like it is joining the left jaw to the left angle of his shoulder, and do the same for the right side.

The arm of his armour on the right side is drawn from the shoulder of the armour as a slightly curved line that runs through to the elbow.

By drawing lines from the two lower angles of the rectangle representing his body which follows closely beside the oval representing his waist and runs down to form his right and left thigh.

To separate the thigh, draw a line running from the centre of the lower section of the oval running down to the left to form the left thigh then from the upper one-third of that line, draw a vertical line running to the right to draw the right thigh.

Also, outline the blade which appears on the left side behind him.

Start To Draw His Dagger

This is used as a guideline for the length of the dagger.

Draw the dagger’s hilt with two thin lines running from the bottom to the top of the blade, then close the two ends to make it look like a rectangle.

To lower and deepen this shape, add some more curves.

Draw the lower section of his neck with two vertical lines from the middle part of his shoulder that run to the lower part of his head.

Then draw a horizontal line below it.

Draw the four knives on his suit with a rectangle and an oval.

The hilts of the first and list knife are covered.

Draw Guts’ Thigh of His Suit

Draw a line across his left thigh to form the bottom of his groin, then add two lines from the lower part of the line forming his crotch and meeting at a vertical line.

This will represent his thigh.

From the oval representing his groin, then draw three horizontal lines running from its bottom to meet at a horizontal line starting at its centre and extending outwards.

Draw a rectangle shape with an extra point on it.

Then draw a sphere-like shape with a single horizontal line representing its centre.

Draw two vertical lines coming out of the top and bottom points of the rectangle to form his chest plate, then add two spheres representing buckles on each side of his chest plate.

The chest plate of his armour is fairly simple to draw; make sure that you keep it symmetrical.

To draw this part of the armour, draw a small vertical line at the bottom and add two small lines coming inwards from it on both sides.

Then continue making marks down his centre and extending outwards up both sides.

Draw the spikes on his armour (optional)

Draw three sharp spikes coming out from each part that makes up the lower part of his chest plate to form the topmost part of this armour. 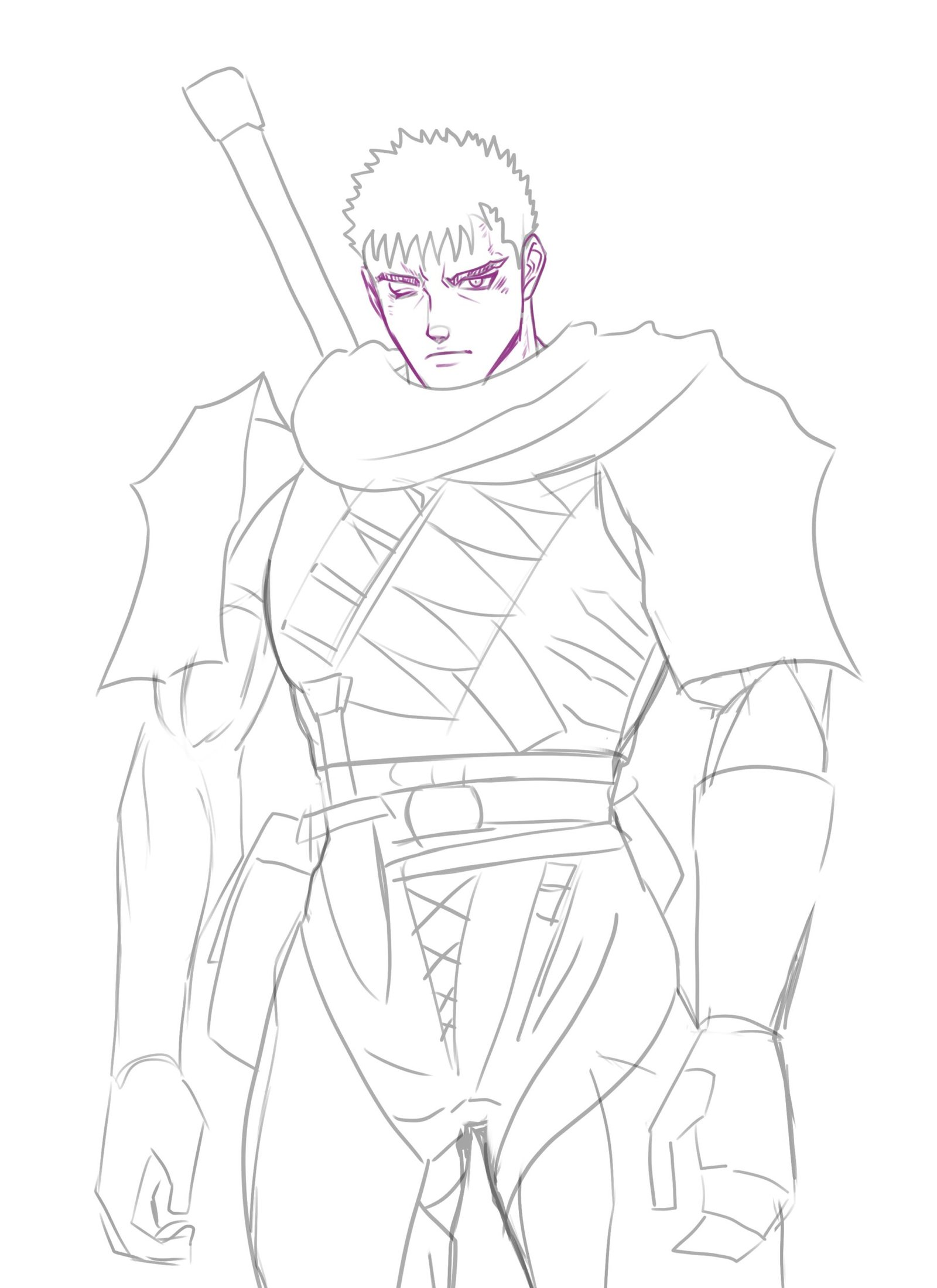 Draw a curved line on the left side of his ear.

Draw a very short vertical line to represent the nose.

Make sure the nose falls on the vertical line separating the head into left and right.

Draw Guts’ spiky shaped hair with a circle for the base of its puffy ends.

To separate this from the rest of his head, draw a vertical line running down from the top of his head to form a line that separates his hair from his face.

Draw a circle and two curved lines at the end of his hair.

To draw the mouth, draw a curved line joining his two lips.

To draw his eyebrows, draw two short curved lines to represent them running across from each eye, then the right brow making it look like it’s going down from to lines and meeting the nose to show Gut’s facial expression

Add a small curved line at the edge of his head to represent his hairline, then draw two straight lines coming out from each side with a small arc on the end.

Draw another line at the bottom of his neck going down from it.

Then add two more lines extending down from both sides of it.

Now add two lines and a square at each side of his mouth, then add a few more lines behind that.

Add Details To His Sword

Draw his sword blade with a curved line at the top and bottom parts.

Then draw small circles representing his eyes on the hilt of his sword. 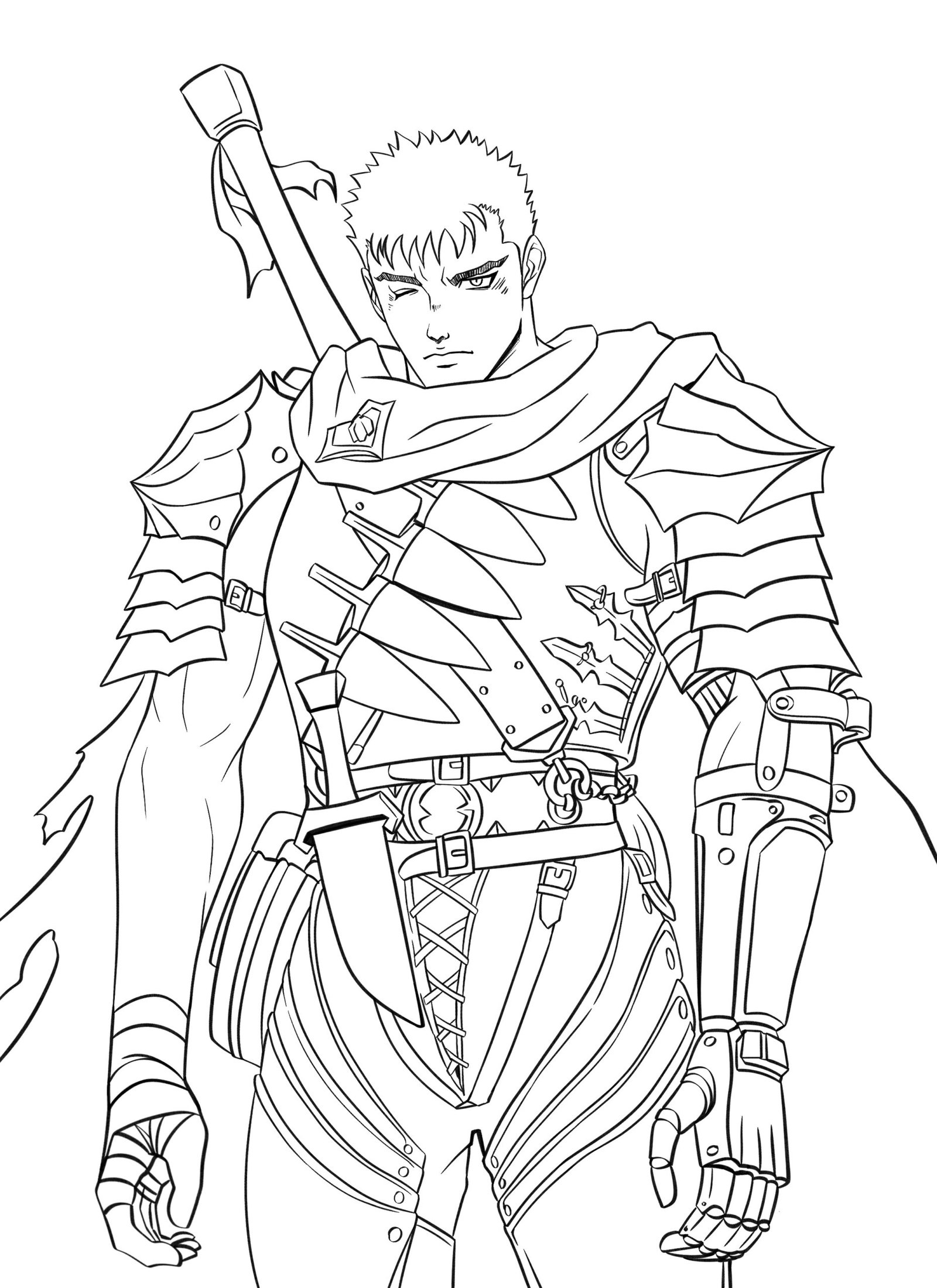 Repeat this for its other side, keeping in mind to keep them symmetrical in all their features except for the length.

Add Details to His Armour

Draw his right shoulder pad with the same basic structure as the other; make it symmetrical to the other.

Draw a rectangle on each side of his chest plate representing buttons.

Add two small circles on its upper part for buttonholes for it.

On the side of each glove, draw a short vertical line going downwards and two lines coming out from it in opposite directions, forming two points at its bottom part.

Draw the Gun belt He Carries

The belt is a rectangle with another rectangle running below it.

The buckle of the straps is just an oval, and the straps themselves are just two straight lines from the buckle to the base part, then repeat that on the other side of his belt.

The gloves are a fairly simple structure but will still require some attention to draw them correctly for his design.

First, you need to draw a short vertical line at each end of the rectangle for them to connect with it.

Then draw a series of straight lines running from the centre of the line going outwards, stopping at the top and bottom parts.

On each glove, draw two lines starting at each side that go upwards and end at the upper part of his elbow pad.

Draw another line going downwards from that point to its lower part.

Then to add some detail to each glove, draw a small rectangle on its lower part.

Start by drawing a small triangle on the lower part of his back.

Then draw an S-shaped line that extends out of it going to the top left corner.

Then draw two straight lines coming out from it in opposite directions and extending outwards to form the cape’s length.

Draw Guts’ Neck of His Cape

For the neck of his cape, draw a small line on the front part of his neck, then add two long lines coming out from it to form a point at the top.

Draw another line going parallel with that and upwards, then extend outwards from both sides, forming horns.

Add two small circles on top of each horn to represent light bulbs. Enhance the outline by adding a small line that goes down from the top of his head and connects to his beard.

Then add a few lines coming downwards from below his head. Then add two lines going upward from his hair.

Enhance Guts’ outfit by adding four small lines coming out of the bottom part of his right arm guard, then extending outwards on both sides.

Add a very short vertical line at both ends, then add two more lines going down from each one.

Then add a small rectangle and four small squares at the bottom part of his left arm guard.

Draw a small line going down from each side extending outwards, then continue drawing its outline with straight lines.

Draw another rectangle on the bottom part of his back and draw two small lines extending outwards and upwards from each side.

Add a few lines on both sides of it to represent its folds.

Add a small line at the bottom part of his right arm guard, drawing an arc with two more lines extending outwards and downwards.

Then add a small line at the bottom of his left arm guard, drawing an arc with two more lines extending outwards and downwards.

Add a small line at both sides of his neck going up from it.

Overall, as you can see, Guts is easier to draw than it seems.

It’s just the details that needed to be drawn and not the overall shape except for his chest armour.