Boruto is the son of Naruto. After being born and becoming a shinobi, Boruto grew up and inherited his father’s “fox-like” features. In this guide to drawing Boruto, we will cover how to draw his face and body features with a step-by-step process and it is quite easy.

You need to have a pencil and a decent amount of paper to draw Boruto, and fully understand the different elements to create an awesome drawing.

Draw the Outline of Boruto’s Head Start the outline of Boruto’s head with a circle and two lines meeting at the center of the circle to divide the circle into four parts.

The lines need to be broken at the bottom to make it look less cartoonish.

These features can be drawn by utilizing the broken lines.

Use the lines as guides for drawing the face and head, always using a wide line for the nose, eyes, and mouth to ensure you capture the anime style of this character.

When outlining Boruto’s eyes, draw a large semicircle, fill it in with a dot in the center of each eye, and draw a smaller circle inside each dot to give more detail.

Draw two curved lines over both eyes, which are meant to resemble eyebrows.

Add a dot for the pupil, draw his eyebrows, and two lines for his whiskers. The upper semicircle will contain his hairline.

Next, draw the hair, which should be left spiked up except for the center of his forehead, where a small strand of hair is drawn to resemble a fringe.

Boruto’s hair starts from the top of his head and forms a wide spiky shape.

This can be achieved by drawing several curved lines pointing in all directions. Outline the Bandana and the Symbol

Boruto wears a bandana that covers the upper half of his face.

Draw the bandana first by making two triangles and then filling it with curved lines.

Boruto’s bandana has an Uzumaki swirl symbol on it.

Start with a horizontal line in the upper semicircle and draw an ellipse around the circle.

Use a small horizontal line in the center as a guide for the swirl mark, then finish off the line with points on either side to form a triangle. Outline the Arm and Hand

Boruto’s arms are separated by a short line, which is drawn as a guide for his hand.

The hand should be big and broad.

Draw the hand first by drawing an ellipse on either side of the drawing guide.

Using a small line as a guide, draw two ovals that are supposed to look like “fingers.”

Now, draw the Boruto sleeve, which goes over his hand and arm.

It also leaves a portion empty over his upper arm. 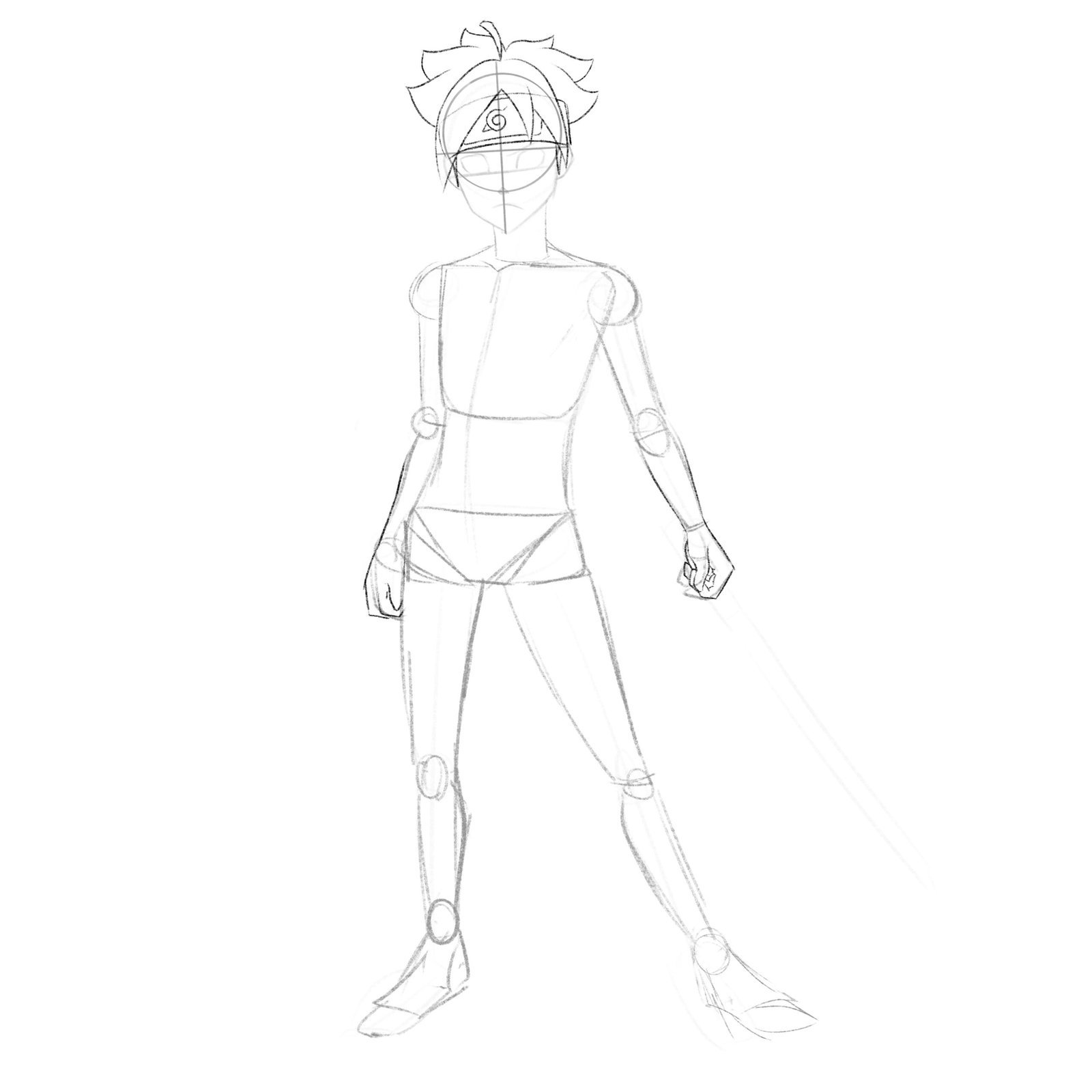 The Boruto leg can be made longer than normal if you want to make him appear taller.

Outline using a straight line, then add some curves to it. The curves are used to show the muscles on the sides of the leg. Boruto wears a shirt that is worn open on the front with zipped pockets.

The outline for his shirt can be drawn by adding a few curved lines, starting from the bottom of the shirt and ending at the neck. 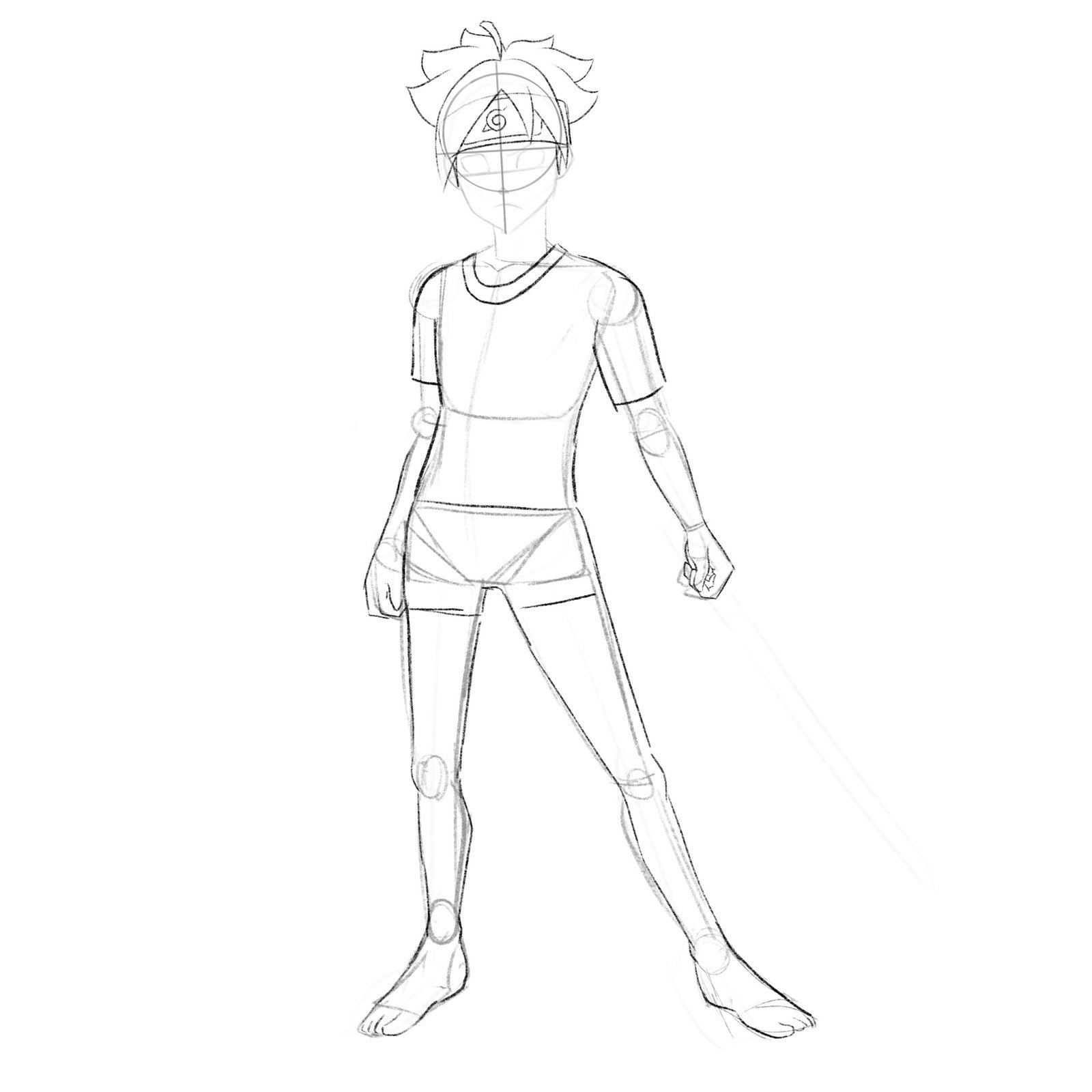 First, draw a curved line for the front of the legs meeting at the center.

From this point, draw two lines going to where Boruto’s knees would be and two semicircles on either side for his pockets, with one higher than the other.

From the end of each line towards the knee, draw a short line as a guide for his socks. Outline the Sword and the Backpack

On Boruto’s right side, draw a rectangle for the sword.

The sword has a sheath that is drawn using a box shape.

The sword handle is drawn using a curved shape.

A rectangular shape is drawn for the backpack, and the zipper is drawn using a curved shape.

The backpack is drawn using a curved outline, and the straps are drawn using a series of short lines, making them look more realistic. Draw a large semicircle for the eyes and fill it in the middle with the pupil.

The eyes are drawn using a curved outline. The pupils show the direction of the light coming through the eye. Draw a semicircle for the nostril.

Then draw an ellipse for the mouth; the mouth has a short horizontal line that serves as the tongue of the Boruto.

The whiskers are drawn using three small lines; they should be placed close together to form a triangle. Draw the Ear and Neckline

Draw two simple curved lines for his neck, one going across his head and one ending under his chin. Draw a straight line for the shoulder.

Then draw two semicircles going under each arm as guides for his sleeves, with one rising from just above the waistline of his pants and the other from under his elbow towards his wrist.

Going over Boruto’s left arm is a cast that connects to his wrist so that he can hold objects in his hand. Boruto wears a sleeveless black jacket over his shirt.

Draw a long rectangle for his shirt, then draw two semicircles on either side for the collar, with one rising higher than the other.

Draw a curved line going down from each shoulder to the end of the sleeves as guides for Boruto’s gloves. To draw the sword, you must first draw the handle, then draw the blade.

Draw the blade by drawing a curved line starting at the tip of the handle and ending at the point where the blade meets the handle.

Draw a curved line for the blade; the hilt is drawn using a curved arc. Boruto’s pants are two overlapping rectangles; start with a vertical line for the main part of each of pants, then add three horizontal lines to represent pockets on either side. Boruto pant has one pocket on the side. Boruto has blue boots with a white rim around them; draw a rectangle on either side, which should be slightly flared outwards.

Then using two lines, represent the edges of his boots.

Boruto boot can be drawn in different ways.

To draw the boots start by drawing a circle at the bottom of the boot, then draw a line upwards to create a curve.

Then draw another line downwards to make the sole of the boot. Start with the shirt, which has two lines as guides for the collar, with one rising higher than the other.

From this point, draw two lines going to where Boruto’s armpits would be and two semicircles on each side for his sleeves, with one higher than the other (to represent Boruto’s left arm being held against his side).

Draw a curved line under each arm for his hoodie. Add Detail to Boruto’s Head with Eyes, Nose, and Mouth

Boruto has a round face with a slightly upturned nose and wide eyes.

Fill in the rest of the face with a few details, like his hair and eyes.

The bandana is the same as the symbol, except that there are no swirls.

On the top of the head, draw his hair and spike it up

Next, outline his lips. Draw two straight lines on either side of it.

– finish off by adding some final touches

Add some lines to represent shadow and detail around Boruto’s eyes. Shadow means how dark or light something is. You can use pencils, pens, or crayons to do so.

Final touches can be by correcting mistakes with an eraser, pen, or pencil.

If you want to use colors, you need to think about what they are meant to look like.

Also, remember that your drawings will have less contrast when you use color. Boruto’s character is strong and spirited, with a major instinct to protect Naruto.

Boruto has inherited from his parents the same kind of compassion, never-say-die spirit, acrobatic power, and love for a good fight.

His fighting style is close-ranged and takes an aggressive approach.

Boruto’s drawing tutorial shows you how to draw him step by step. The drawing is done in black ink and colored pencil, have a good idea about the brutal character before starting the drawing.